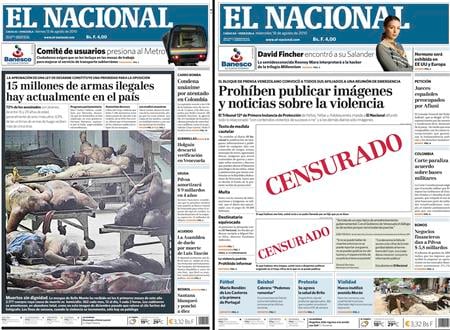 A Venezuelan court ordered newspaper El Nacional not to print violent images after the paper published a controversial image of dead bodies piled up in a Caracas morgue.

The photo, taken by an El Nacional photographer in December, ran with a story last Friday about security problems in the country. On Monday, the image was picked up by another newspaper, Tal Cual.

The Venezuelan government deemed the decision to run the photo as a part of a campaign criticizing current president Hugo Chavez, in light of the upcoming September elections.

The court ordered El Nacional and Tal Cual to not publish violent photos, saying the ruling is to protect children:

“(The print media) should abstain from publishing violent, bloody or grotesque images, whether of crime or not, that in one way or another threaten the moral and psychological state of children.”

El Nacional responded to the ruling on Wednesday by running a front-page story about what they call censorship, along with large blank spaces with “Censored” stamped across where photos usually run.

Miguel Henrique Otero, director of El Nacional said that the government was aggressively responding to criticism of its response to crime. “The editorial aim of the photo was to shock people so that in some way they react to the situation, since the government does nothing,” Otero said.

Venezuela is cited to have the world’s highest violent crime rates, with an estimated 16,000 murders last year (the U.S. had 14,137 murders in 2008). Crime statistics are a hot issue in the upcoming election.

But Venezuela’s Public Defender Gabriela del Mar Ramirez Perez said in a statement that the court order was not to limit or censor the press:

We reaffirm that the exercise of the constitutional right to freedom of expression and information, or the development of actions to promote electoral trends … in no case justify violating the rights of children and adolescents.

Reporters without Borders has jumped on the issue, noting that the disturbing nature of the published image calls into question the newspaper’s “sense of responsibility.” Yet on the other hand, the “court order is much too broad and imprecise,” the group wrote in a statement:

“What are the exact criteria for deciding if something affects the psychological well-being of children or adolescents? Would the photo of an armed policeman in the street, a soldier on maneuvers or a death notice be in breach of this order?”

Another fact worth noting is that some members of the Venezuelan government say that conditions in the morgues have changed since the photo was taken.

So while newspapers have a responsibility and right to report the news, did El Nacional go too far? Did they wrongly cross an unwritten line? And is the court ruling too stringent? Let us know what you think.

How to Make the World Move in Slow Motion Around You