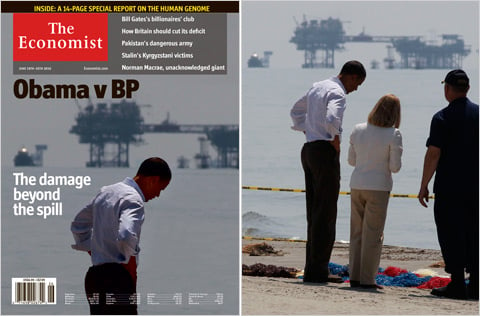 The Economist is in hot water after running an extremely edited photograph of President Obama on a Louisiana beach. The cover photo shows Obama alone on the beach. But the original photo, taken by Reuters photographer Larry Downing, shows that Obama was, in fact, not alone at all.

This is a huge problem because The Economist’s omissions entirely change the tone of the image in order to make Obama appear alone, hanging his head, when in fact he is likely looking down at the beach while in conversation with the two people next to him.  Additionally, according to journalism ethics, news photos should not be altered, especially to this extent.

Reuters has a policy against this sort of editing:

“Reuters has a strict policy against modifying, removing, adding to or altering any of its photographs without first obtaining the permission of Reuters and, where necessary, the third parties referred to.”

There’s no word on whether Reuters has weighed in on the issue yet.

Shortly after the New York Times’ Media Decoder blog sparked a discussion about the controversial editing decision, deputy editor of The Economist Emma Duncan responded in an e-mail:

I was editing the paper the week we ran the image of President Obama with the oil rig in the background. Yes, Charlotte Randolph was edited out of the image (Admiral Allen was removed by the crop). We removed her not to make a political point, but because the presence of an unknown woman would have been puzzling to readers.

…We don’t edit photos in order to mislead.

I asked for Ms. Randolph to be removed because I wanted readers to focus on Mr. Obama, not because I wanted to make him look isolated. That wasn’t the point of the story. “The damage beyond the spill” referred to on the cover, and examined in the cover leader, was the damage not to Mr. Obama, but to business in America.

Currently, The Economist’s site also has the featured image, cropped tighter, running with the cover story. A void remains where Randolph originally stood. And next to that, the Reuters’ credit.