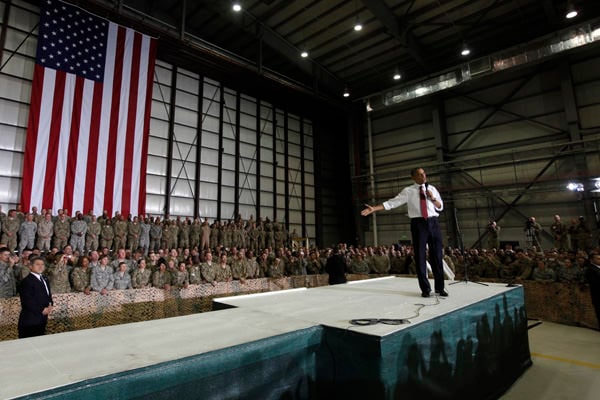 Reuters photographer Kevin Lamarque recently got a call that summoned him for a top secret assignment: travel on an unannounced trip to Afghanistan with President Obama. After getting back, Lamarque wrote up an interesting behind-the-scenes blog post documenting his experience:

We are driven to the remote hangar where Air Force One sits out front, completely blacked out. We board the plane in darkness and inside the cabin, the shades are all down. We will not do the customary photo of Obama boarding the plane as we do on every other scheduled departure. Instead, at some point, we feel the plane begin to move and we know President Obama is on board and we are headed to Afghanistan.

[…] Communication, a photographers primary concern after making pictures, is patchy at Karzai’s presidential palace, our first stop. The ability to get pictures out to our clients quickly can produce stress in places such as Kabul. Though all four photographers on this trip (Reuters, AP, AFP, New York Times) carry various data card devices, we know they may prove useless. We also carry satellite phones, but we all know that there will never actually be time to set them up and use them. At the palace, we do get a faint and slow cellular data signal, and after checking that the embargo on Obama’s arrival has been lifted, we are all able to transmit the first pictures of Obama arriving in Afghanistan. The veil of secrecy is gone.

Into the night: Covert travel with President Obama [Reuters]

How to Properly Light a Black and White Photo Shoot