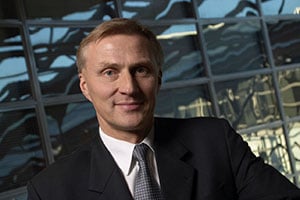 Speaking on the explosive improvement of camerephone technology in Helsinki yesterday, Nokia Executive Vice President Anssi Vanjoki shared his vision of the future for cameraphones — a future without DSLRs.

Pointing at a professional photographer in the room, Vanjoki said, “There will be no need to carry around those heavy lenses.”

From a poll we ran on PetaPixel last week, we found that 59% of our readers didn’t believe cameraphones would replace even compact cameras. We didn’t even think to mention DSLRs, since there currently does not seem to be any answer as to how cameraphones will address their disadvantage of smaller sensors and poorer optics.

Wedding photography with a cameraphone? Really?

Perhaps these quotes and articles aren’t intended to suggest that the DSLR market will be replaced by cell phones, but rather that the quality difference will be reduced to the point that those who simply bought DSLR cameras for casual photography might be satisfied with cameraphone quality.

If that’s the case, these claims might be true. Enough consumers may buy into the megapixel myth and eschew fancier cameras for the increased “megapixel power” of cameraphones. In the same speech, Vanjoki also predicted that cellphones will be capable of filming HD video within the next 12 months.

Once we see a “Last 3 Minutes” caliber film shot with a cameraphone, we’ll be believers. Until then, we’ll keep bringing our DSLR to weddings.