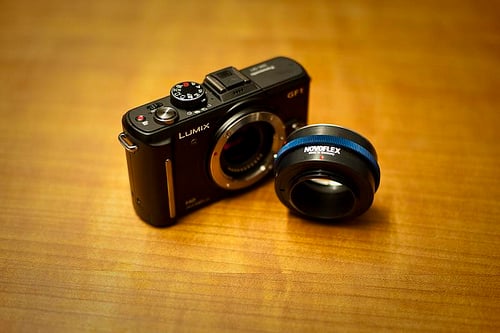 Back at the beginning of the year, Wired stirred up some fierce debate when it published an article titled, 5 Reasons to Ditch Your Digital SLR.

Unless you have a specific use that these cameras can’t meet, or you need the very highest level of performance only a Canon 1D or Nikon D3 can bring, you have no reason to buy a DSLR.

Today, they’re at it again with a new article titled, Do Mirrorless Cameras Spell the Death of DSLRs?.

[…] what does it mean for the DSLR, which has for years been the fastest growing sector of the camera market? A DSLR used to be the only way to go if you wanted a camera that had a big sensor and a reasonably responsive shutter. The other benefits, like interchangeable lenses, are arguably only there for the more serious. Take a look around you next time you’re in a tourist spot and you’ll see mostly sub-$1,000 SLRs with the kit zooms still on the front.

The argument is that the large sensors, small camera size, and interchangeable lenses on the newer cameras will steal all but the most serious photographers from the DSLR market. Their view is summed up nicely in the last sentence:

The DSLR won’t die. But it could become a niche product, and the specialist tool of the professional.

What do you think about this debate? Will DSLR cameras start to decline in popularity, or does Wired not know what it’s talking about?