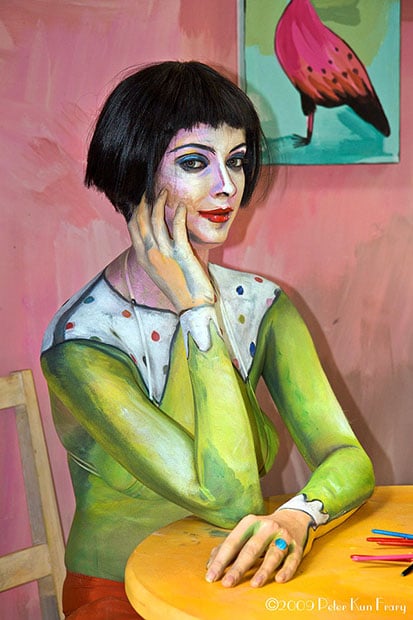 Despite what your eyes tell you, the above image is a photograph of a real person, not a painting. It was taken by Peter Kun Frary, a music professor at the University of Hawaii. He tells us,

Recently I walked by the Ala Moana Center Mac (cosmetic) store and noticed a crowd of Japanese tourists gawking and snapping pics. A model in full body paint was posing against a set on an open air stage in front of the store. I thought she was a darn good simulation of a late 19th or early 20th century French oil painting. Although there were no stage lights, natural sunlight light was diffused through white cloth canopy to reduce shadows and contrast.

We can imagine an artist doing a whole series of photographs that look exactly like paintings. Has this been done before? Link us if so!