This is another post geared towards ideas and experimentation, rather than practicality and general photography.

Here are two (kind of abstract) photographs I took recently. The first one is of some webs that I came across: The second photo was of the night sky packed with stars: 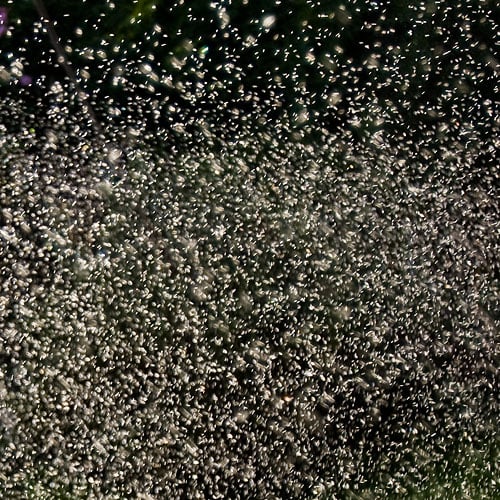 Actually, neither of the photos were of what I claimed they were.

Can you guess what I shot to make these two photographs?

They were actually both taken in my backyard. My sprinklers were going off and I was curious about what the scene would look like photographed.

Here are the original, uncropped photos. You can hover your mouse over them to see what they looked like straight out of the camera, prior to post-processing: For photos like these, the sprinklers should be between you and the sun. If the sun is behind you, then you probably won’t catch the water drops very well on camera. It also helps around if there’s a shadow or dark background behind the sprinklers.

Try experimenting with abstract photographs of ordinary things, using camera settings to give the photos different looks and textures. If you come up with some interesting ideas or find interesting results on your hands, please do share them with us!