One of the things that never ceases to catch my eye is when people are framed in interesting ways within tunnels of light. That sounds a little confusing, so let me show you some examples…

Here’s a photograph I took just a few days ago on a walk along a greenbelt near my home (you can hover over it to see the original, unaltered photograph): 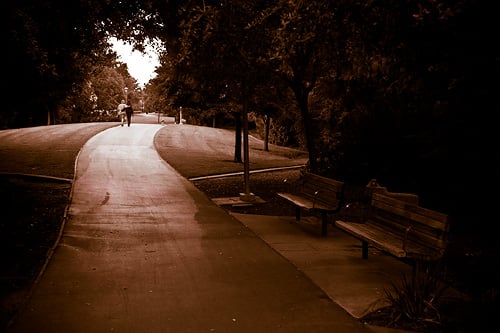 This isn’t the best of examples, but I’ll just start off with it. Notice how the trees create a shadowy, natural vignette around the two people walking arm in arm. You might be surprised, but you can find these “natural vignettes” everywhere you look — you just need to look for them! I do wish the couple was a little closer to me along the path, perhaps at the edge of where the trees’ shadows reach (you’ll see why in just a moment).

The other really interesting thing I like about this photograph is how the gap in the sky created by the trees is the shape of a heart, but I digress…

Let’s move on to another example…

Here’s a photograph I took back in February 2008 at the UC Davis arboretum. My family and I were walking along the path and passed under a tunnel (hover over it to see the original): 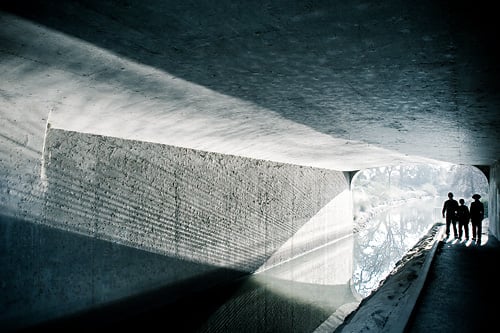 The light bouncing off the water was creating interesting patterns on the tunnel wall, while my family became silhouettes when framed by the strong daylight at the end of the tunnel.

This is slightly cheating, since a dark tunnel during the day will always be a place to shoot “tunnel of light” photographs. Thus, I find naturally occurring “light tunnels” much more interesting. They depend much more on where you stand and how you frame the shot.

This third and final example was taken back in April of this year outside the VLSB building on the UC Berkeley campus (hover over to see original): 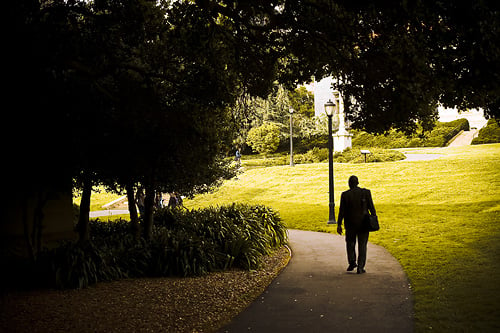 The man was still in the shadow of the overhanging branches, so he too became a silhouette when framed by the bright scene in the background.

Next time you’re outdoors, try framing someone using shadows and a tunnel of light!

Interview with Valerie J. Cochran of your waitress