Tomorrow is the 4th of July here in the United States (well, everywhere actually), which means there’s going to be FIREWORKS! Huzzah! 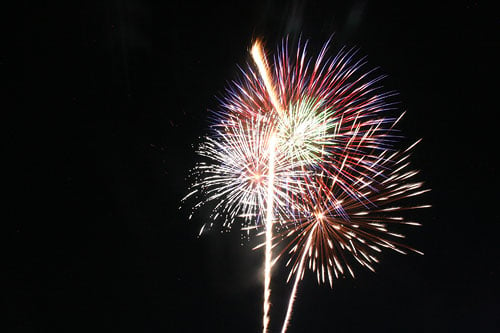 It also means a lot of photography blogs will be posting tips and advice on shooting these firework shows. Instead of posting some ordinary article with things I’ve learned, I decided to see what you all had to say about it, and asked for your tips on Twitter.

I’ll share some of the helpful responses and fill in some details as necessary. Let’s get started!

tripod, cable release and a bit of trial and error…

Use mirror lock up, use a remote shutter release, and, most important, bring a flashlight!

Since you’ll be photographing at relatively slow shutter speeds, a tripod is definitely important. You’ll be pointing the camera up at the sky, so you probably won’t be able to find anything to set the camera down on that will suffice if you don’t bring a tripod.

A cable release will allow you to avoid any blur caused by your finger pressing the shutter. The longer the exposure, the less this initial shake of the camera will matter, but having a cable release is still very helpful. You can get one for as little as $5 (shipping included) on eBay for either Canon or Nikon.

Finally, you can further reduce blur by using the mirror lock up feature of your camera if it has one (Perhaps Google it to find out?). What this does is cause the first press of your shutter to lock up the mirror of your DSLR, and allows the second press to take the photograph with only the shutter curtains opening and closing. This avoids the swing of the mirror that occurs when you normally take photos, reducing any blur that would have been caused by it.

Instead of having your photo turn out like this, 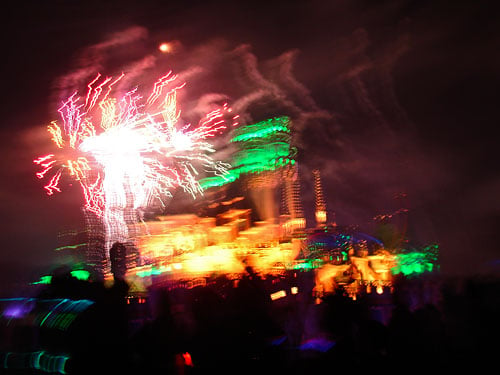 you can end up with clearer, sharper shots like this: 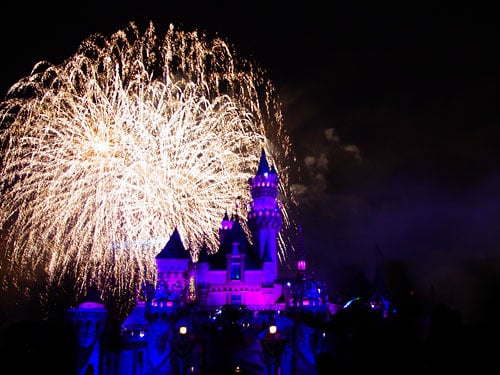 Fireworks look better in a context – just air as the background is boring – Get foreground; Try to be upwind of the launch site

My favorite fireworks-shots I’ve taken have all had people in them, holding very still. I like working with the silhouettes.

I’ve definitely found these things to be true as well. You can take really nice looking photographs of fireworks against the dark backdrop of the sky, or you can include things in the foreground, especially silhouettes of the people watching, to make the photograph a lot more unique and interesting. 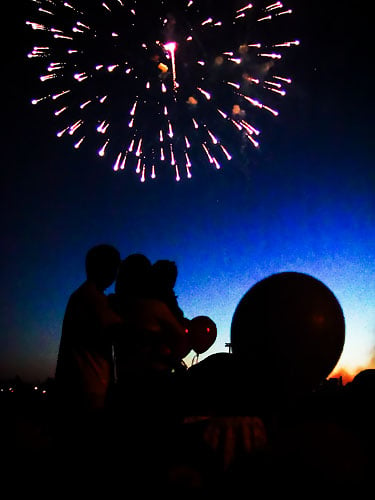 Persistance. Accept that to get 1 decent shot, you are gonna shoot 100 crap ones.

Definitely true. Out of the hundreds of photographs I’ve taken at firework displays, only a handful of them turned out well. The others were either poorly framed, poorly exposed, poorly timed, or all of the above.

Thus, shoot as much as you can to increase the chances that you’ll end up with a good shot. To do this, it would be wise to bring as many memory cards as you possibly can.

bring a tripod, find steady ground, shoot shutter and use a remote release. Shoot a pic or two before the start to check settings

If you’re intent on leaving the show with a good photograph, then go ahead and shoot the show like you would shoot any night shot. On the other hand, if you’d like to enjoy the show as well, figure out the settings you need to use, take some test shots, and from there on out just enjoy the show and snap shots using the remote shutter release.

Here’s a photograph that I took with a 10 second exposure and a remote release while watching the show at the Butchart Gardens in Canada: 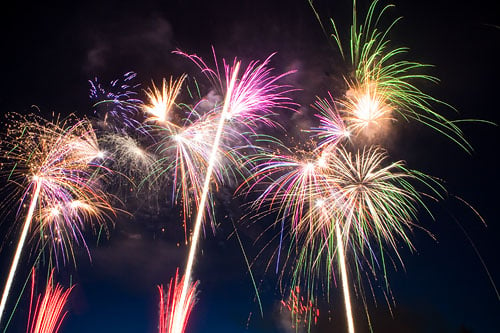 If you DO end up shooting through the viewfinder, you’ll probably want to shoot with both eyes open in order to see when the fireworks are launched and the path they’re following.

ohhh yeah bring a monopod too to prod people outta the shot..

Haha. I’ve never had to do this one before. Maybe it might come in handy for some of you though.

For unconventional advice, change the focus while shooting to get focus-to-blur effects.

Now this is interesting, and not something I’ve done before. During the exposure of the shot, manually throw the shot out of focus to end up with an creative and interesting effect. Here’s the example that @dhavatar provided: 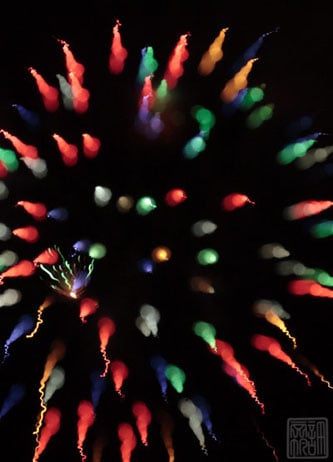 tripod and remote trigger. Use bulb to time the shots. Leave shutter open until the series of fw is over. Repeat process :)

fireworks, you hv 2 learn how to predict when firewrk will explode. I use bulb mode and expose for duration of burst, no longer.

The “bulb” setting on your camera allows you to determine how long the shutter stays open rather than having it expose based on a fixed amount of time. You can press and hold the shutter when a series of fireworks are launched, and then release to close the shutter after the series ends.

#8: Cover the Lens in Between Fireworks

If it hasn’t already been said, put the camera on bulb setting so the shutter remains open and use a hat or something dark to cover the lens between bursts.

If you’re not including things in the foreground, you might want to cover up your lens between firework bursts to prevent ambient light from adversely affecting your shot.

An interesting thing to do during firework shows is to turn your back on the fireworks and capture the expressions of the people watching, using the brief flash of the firework to expose the image. 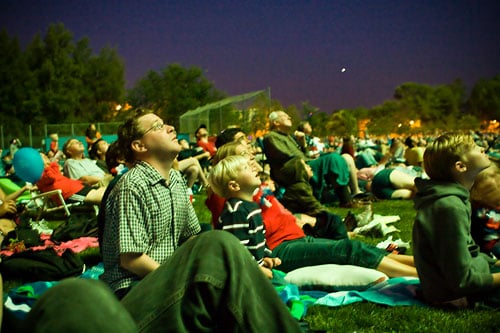 This sparkler and light painting idea is pretty great. Imagine a photograph of a firework exploding in the background while your friend holds a sparkler or writes a message with light in the foreground. That would be pretty epic. Be sure to let me know if you end up with a photo like this!

bulb mode with external shutter release. just make sure your aperture and focus are set correctly before shooting.

So what ARE the settings you should be using for this kind of photography?

ISO: You’ll probably want to use the lowest you can, which is most likely 100. Going with a high ISO will introduce a lot of noise in your photo, which is something you definitely want to avoid when taking long-exposure night shots.

Aperture: If you’re shooting just the fireworks, it will probably help to go mid to high (f/8-f/22). You don’t want any depth of field or the lack of sharpness that comes from lower apertures. If you’re taking portraits with fireworks in the background, then you might want to go lower to throw the fireworks out of focus.

Shutter Speed: This really depends on the type of look you’re trying to achieve. If you use a relatively fast shutter speed, your firework might look like this (this is 1/400 of a second): 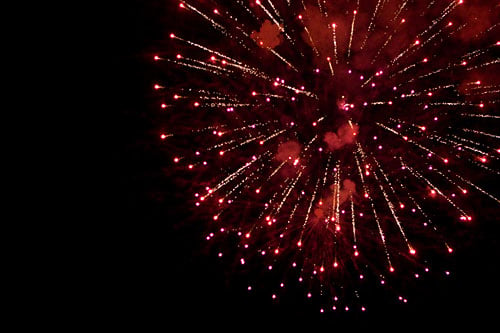 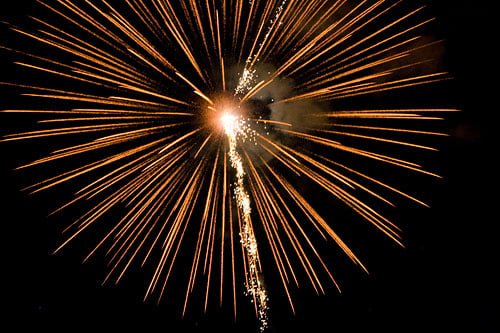 Focus: Since the fireworks are exploding pretty far away from you, set your focus on infinity and change it to manual. You don’t need the camera attempting to focus on the fireworks, since you know what it should be focusing on already.

Focal Length: This really depends on many factors, such as where you’re sitting and how much of the sky the fireworks take up. Generally I’ve found that it’s safer to go wide, since you can always crop afterwards if you capture too much sky. If the lens you bring isn’t wide enough, you might be fiddling around with the framing all night.

Modes: In general, try to stay away from automatic modes. This means setting both your exposure and focus to manual. This allows you to determine the correct settings for your photographs and have your camera come up with consistent shots. You don’t want the camera to try and figure out the proper exposure for each shot, since it’s not a situation where a camera excels at determining the proper way to expose.

Thanks to everyone who responded to my tweets asking for your personal tips. I definitely enjoyed reading through all the different things you guys had to say. Sorry if many of you weren’t mentioned or included. We had many overlapping tips, and I went with the first one or two people who responded. Hopefully this was a helpful and informative article. I hope to do more “reader generated” articles in the future! 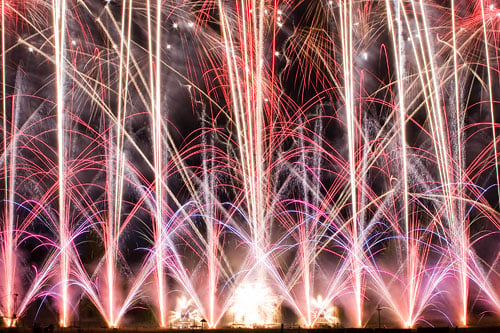 Interview with Faisal Sultan of friskyPics

And the Winner of the QuikPod is…