This entry will describe my thought process when editing a portrait, though it could apply to general photos too.

Here’s the original photo I will be working with straight out of camera (i.e. RAW but processed to JPEG without any edits using Adobe Standard for color settings). My initial reaction is that it’s underexposed on the skin. Then I notice that it’s crooked, but that doesn’t bother me too much in this picture. I also notice that it’s a bit on the cold side. (Read: Check exposure, composition, and white balance. Not necessarily in that order).

So I make some really basic edits. Since I’m not going to crop or rotate (I usually worry about composition first), I increase the exposure until I like where the skin tones are (while making the WB a bit warmer). Sometimes I’ll use fill light or recovery depending on the situation but in this case increasing the exposure was sufficient. In the end, it’s about making the skin look as I want (and harsh change in dynamic range on the skin usually looks bad but it’s not a problem in this picture). The next thing I usually do is to play with the black clipping and contrast until I’m happy. However the contrast in this picture is already to my taste so I didn’t touch anything. Then I sharpen using preset sharpening in LR. I usually don’t change the preset sharpening unless I think it looks bad. So here’s the picture after those edits (hover over to compare): 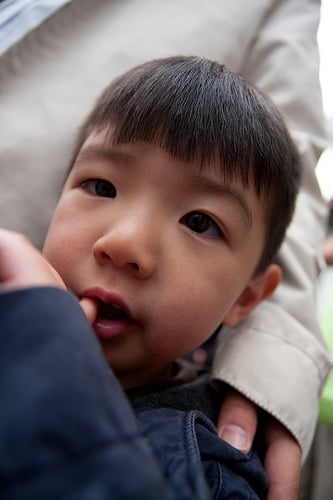 Now take a look at the following picture. Can you figure out the two things I did to finish it off? (Hover your mouse over it to compare) The first edit is a bit more obvious than the second. I added a lens correction vignette to the outside. I do this to most of my images and it’s more of a personal taste thing (and to bring the subject out more) than anything else. The second edit is a bit harder to catch, but it’s all in the eyes…

Did you catch it? Look at his eyes. Often for single person portraits, I will do spot editing on the whites of the eyes to make them a bit whiter because they tend to be shaded in soft lighting due to eyebrows/eyelashes/eyelids.

That is all! Of course, this isn’t comprehensive in any way but is just an example of how I typically think and how I thought about this picture.

This article was originally published here.