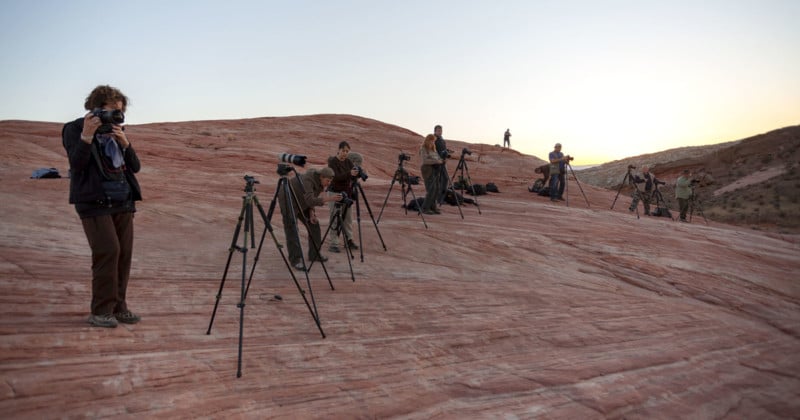 Have you ever noticed that when you go to a Costco gas station, the rows of vehicles can be so orderly with everyone nicely lined up with a generally polite and cordial demeanor? But once those friendly drivers park their fueled cars in the lot and trek inside the Costco store, all matters of civility, politeness, and order disappear the moment you approach one of the food sample stands.

Shoppers jockey their carts for position to seize that small pizza sample, blocking the little ones from taking cups of trail mix, and snatching that last mini-cup of yogurt like it’s the last cup of yogurt for all of mankind. 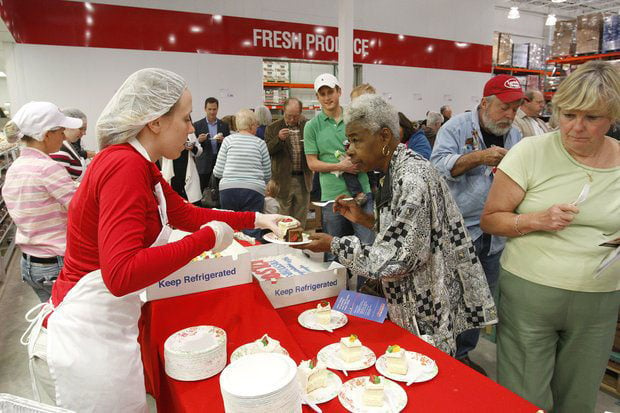 What has become of our society, with an attitude that something there for the taking can’t be taken by others? A mindset that it is only his or hers for the taking, and to be damned sure no one else can get one before them… or after. Where has common decency gone?

And I’m not talking about just the Costco shoppers. They are a perfect analogy for today’s landscape photographers.

I will put this out there right now: I am generalizing about the mindset of landscape photographers overall. For every rude and inconsiderate photographer standing at Yosemite’s famed Tunnel View, there are 2-3 photographers that are courteous. But as your mother told you, all it takes is for one person to ruin it for everyone else.

So for those photographers who block others’ shots with their setup, who hold court at a location for hours on end to keep others from their precious 3-foot-square tripod property, who trek through a scene and mar it for those that follow, and who give complete disregard to the soil, sand, foliage or scene to ensure that they have an ‘original’ photo…

Face It: Your Photo is Not Better. It’s Not Original

I hate to break it to you. Your photo that you strived so hard to get, seeing where everyone else was set up and where you could get closer, albeit in their angle of view; breaking branches as you bushwhacked your way up the mountain; trying to copy that one photo you saw one time on Flickr, a post-processed, over-saturated photo that got tons of ‘oohs’ and ‘aahs’; ignoring the cries and pleas from other photographers that you were in their shot or ruining their shot…

Well, that didn’t make your picture unique or better. It just was different than everyone else. And different certainly doesn’t mean good.

And that ‘different’ was at the sacrifice of all the other photographers you screwed over.

We see it all the time during the Death Valley workshop course that I run when a photographer will trek up a distant sand dune that the students are shooting. Even as everyone hollers out to stop, yelling for the photographer to walk on the shadow side so as to leave no visible footprints, the response yelled back is, “I don’t care. I’m getting the shot you aren’t getting!” Or, even worse, “I was here first. Live with it.” 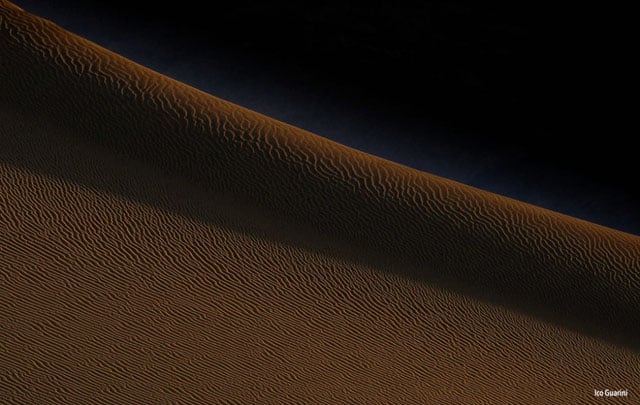 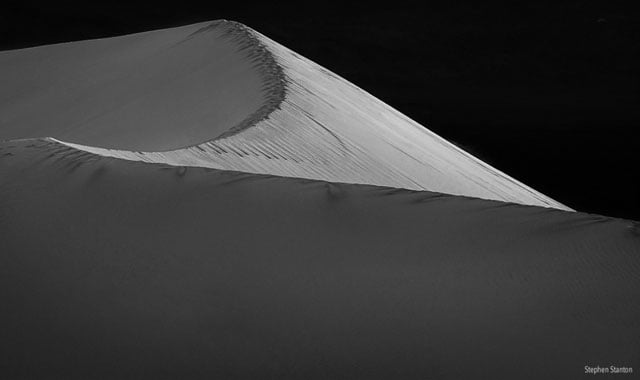 Look at the two photos above. Yeah, the footsteps can ruin a perfectly pristine dune face. But in the top photo, the dunes were tracked over by our workshop photo students, but on the backside — the shadow side that doesn’t face the camera.

It doesn’t take a lot of common sense to see that your shoes leave footprints. But when some of these photographers have a goal in sight, either it’s ignorance, carelessness, or intentional that they leave footprints behind.

Heed the Old Photo Adage: Look Behind You

One of the greatest little sayings in photography has a simple premise: once you are set up with your shot, don’t forget to check the scene behind you. Something amazing might be happening that you have your back facing. Or it could be a large group of angry photographers.

Several years ago at Zabriski Point in Death Valley, where photographers flock to the vista point for first light on Manly Beacon at sunrise, about 40 photographers were lined up on the paved viewpoint while one photographer hiked down to a rise below the vista point — clearly in everyone’s angle of view — and proceeded to ignore the yells and requests to clear out of the shot. The photographer, wearing a bright orange and black jacket, never once even turned to acknowledge or acquiesce to the requests. The sun rose and everyone was planning the post-production cloning to remove the photographer. 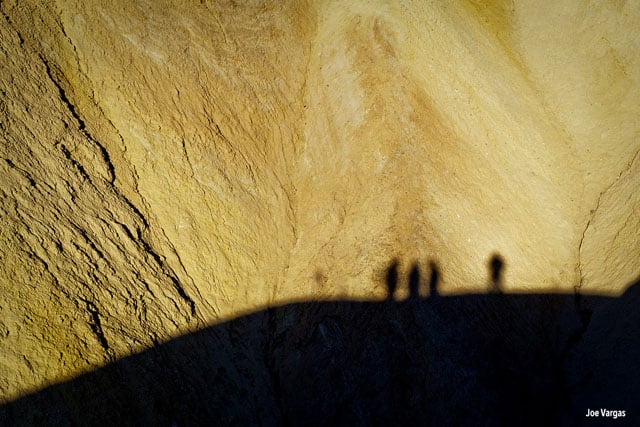 And what about her shot? It wasn’t that different. From the lower vantage point, if anything, it put the horizon right through the middle of Manly Beacon. Her shot wasn’t better than everyone else’s. It was just different.

To that photographer: you weren’t the better or smarter photographer. Your photo didn’t beat out everyone else.

It made you the scorn (and disgust) of the landscape photographers that do try to capture something in a respectful way.

Take Photos. Don’t Leave Anything Behind… Not Even Footprints

“Has ‘tread lightly’ become a phrase that is as common as ‘recyclable cups,’ easy to recite but which takes effort to actually apply?” 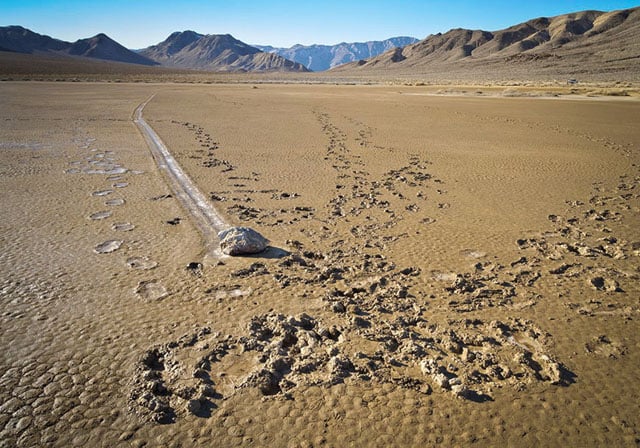 A while back, an unknown photographer trekked out through the mud at the Sliding Rocks at the Racetrack in Death Valley. The playa there is so delicate that a mark just ½” deep on its surface is visible for years.

This damage would have been something that lasted for generations, but the National Park Service stepped in to perform some “reconstructive surgery” on the damaged playa.

We should never leave any sign of our presence at a location. That includes not just trash but also footprints, tripod holes, or broken branches. We want to arrive at a scene and see it in its natural state, photographically pristine for our creative vision, and not in a state that looks like Bigfoot was there with his 4×5 camera.

Doctoring the Scene? Really? You Have to Stoop That Low?

It’s one thing to place a colorful leaf on a streamside rock, creating that anchor in what will probably be a nice photograph of flowing water. (I knew a photographer that kept a collection of leaves just for that purpose!) This doesn’t alter the scene or make it irreproducible for later photographers.

Tip: The rocks aren’t special. It’s the location. If you bring them home, I guarantee you they won’t slide across your kitchen floor. 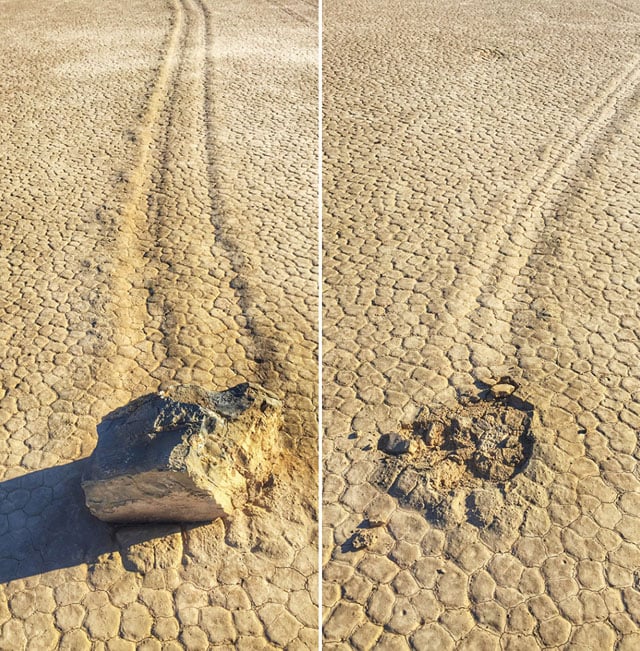 I would attribute this rock theft to tourists who want that special (albeit illegal) souvenir to take home. That is until I spoke with a photographer friend who shared a story that took the lack of photography ethics to a whole new level of dastardly low.

My friend shared that when he was at the Racetrack several months ago, he witnessed a photographer picking up one of the sliding rocks and moving it to a different track. He then proceeded to carry the rock off the playa and discard it.

When he was questioned, his response was “Now nobody will get that shot ever again. It’s one-of-a-kind.”

Think about that statement for a second and the rationale behind it. This is the new level of low photographer ethics that we are seeing propagate at photography locations lately.

What narcissistic, self-absorbed, holier-than-thou, pompous, and arrogant level of conceit leads you to believe that you are better than the rest and therefore worthy of a location that only YOU should have the God-given right to photograph, rooted with such a complete disregard to nature, dictated by a guttural fear inside you that someone else might actually take that same, cheap, boring, and stereotypical iPhone-level snapshot lacking any creativity that you so callously created?

Give me a second to climb down off this soapbox…

You Are Not the Protector of the Realm

It’s about 30 minutes after sunrise in the Alabama Hills. At the Mobius Arch, a beautiful natural arch that frames Mt. Whitney in the distance, photographers trek up throughout the morning to capture an iconic shot.

Making camp there, in your collapsible chair with your camera bags surrounding you like a harem, keeping other itinerant photographers at bay, lined up but denied their opportunity as you hold court and wait for that perfect, exact millisecond of shutter click. It does not exactly paint a picture of you on a pedestal, “smart enough to get here before everyone else to get the shot,” as you say.

No, you are not the better photographer because you got there early. No, you’re a jerk. You could easily yield your position for 30 seconds to let another photographer in to get the photograph they see right then and there.

There is no public location that Mother Nature created that is exclusive access to a photographer that “got there first” or “waits for the perfect moment” and no other photographer can’t enjoy.

Don’t let your fear of someone else getting “your” shot dictate your actions of keeping it from others. Everyone sees a scene differently, even at a place that is so photographed over like Mobius Arch. Or Tunnel View in Yosemite Valley. I just can’t see Ansel Adams using his 4×5 camera to block others from getting a shot. 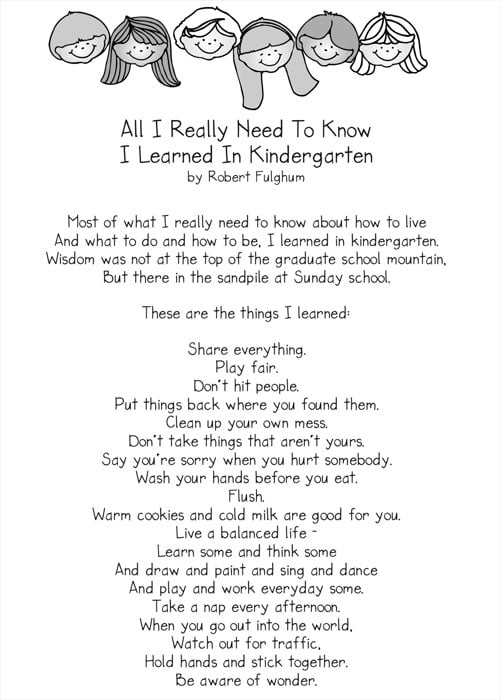 It’s Time to Step Up. We’re All In This Together

Just because you have a self-inflicted belief that you have a right to do something, that doesn’t mean morally or ethically it’s the right thing to do. Quit screwing over your fellow photographers!

It’s time for all of us to step up. We need to watch where we are going and make sure that nobody can tell where we’ve been. We need to listen to the requests of other photographers when we are entering a scene that they are shooting. Share your spot with others. Play nice. Be aware of wonder.

Maybe we all need a refresher that goes back to kindergarten, where we all learned to play fair. Remember the rules of kindergarten? Those rules apply to everything we are talking about here.

The rules will not only put a smile on your face and brighten your day but also make more sense than anything else you’ve read in this article.

In the name of landscape photographers everywhere, let’s be the photographers we wish the others to be that precede us. Let’s bring back the common decency.

P.S. Share this with every photographer you know. And tell them to share it with everyone they know. It will land on the screens of those that need to read these words the most. Let’s make it count.

About the author: Michael Mariant is the Director of Workshop Operations at High Sierra Workshops, which offers world-class photography workshops for those interested in shooting in the great outdoors. You can find out more on their official website.