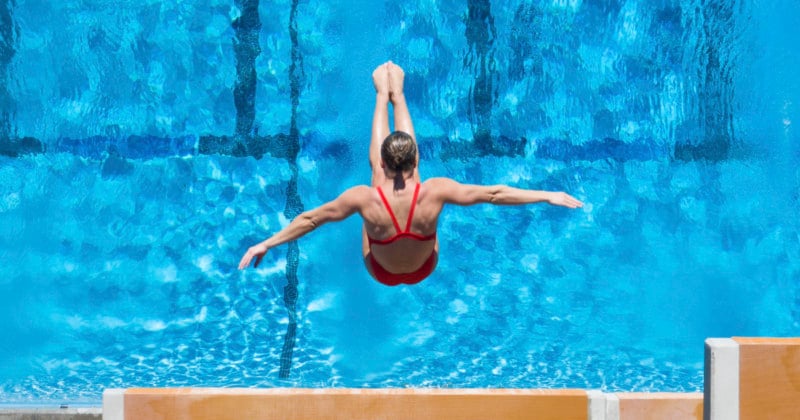 A photographer teamed up with a drone company to create an incredible FPV shot following a Team USA Olympic diver as she splashes into a pool.

Ilanna Barkusky was scheduled to shoot with two-time Olympian Katrina Young and to pull off something special she brought in Jake and Ryan from Drone Dudes.

The resulting shot is a compelling action shot following Young as she gracefully tumbles off a 10-meter platform.

“The drone follows her off of the 10-meter platform and gives the viewer a look into what it feels like to dive into the pool with her,” Barkusky tells PetaPixel.

“As she is flipping and descending into the water so quickly, we needed a way to keep up with her if we wanted to showcase her ability in the best way possible.

“The creative concept for a video we were working on (coming in early 2023), was about putting the viewer into Katrina’s position and mindset to understand what goes through her head during big competitions such as the Olympics.”

A first-person-view (FPV) shot was the obvious choice so Barkusky contacted Done Dudes with her idea.

Jake and Ryan from Drone Dudes suggested that the creative crew use a waterproof drone so the GoPro Hero 11 attached to it could follow Young into the water.

“It involved building a custom housing inside to protect the electronics and a lot of conformal coating,” explains Jake.

“A diver retrieves it and we let it dry out — sometimes some of the electronic parts need to be quickly replaced but other than that we just give it some time between uses.”

The team from Drone Dudes used a modified Shendrones Hydrophobe that was altered to be totally waterproof, as opposed to just being water resistant.

“We built and tested it in about two weeks — there were a couple of rebuilds along the way while we were getting the waterproofing down correctly,” adds Jake.