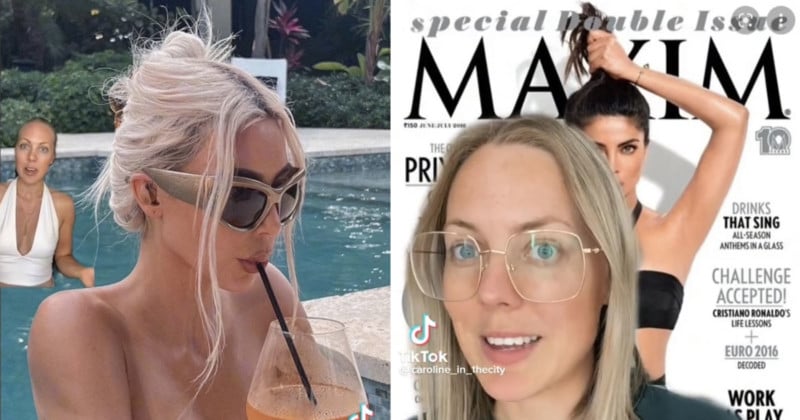 A photographer has become a TikTok star educating the internet on how to spot if a celebrity image is Photoshopped.

Commercial photographer Caroline Ross is teaching “digital media literacy skills” on TikTok — asking viewers if they can spot what is “fake” in a celebrity’s image and revealing exactly how stars edit their photos.

Ross went viral on social media in September this year when she exposed how Kim Kardashian warped her body in an Instagram post.

@caroline_in_thecity Nerd out with me and test your media literacy skills! Can you tell what is fake in this image? #medialiteracy #photoshopskillsonfleek #carolinesediting #photoshopgametime #greenscreen #greenscreenvideo ♬ original sound – Caroline In The City

In other fascinating videos on her TikTok page “Caroline in the City,” Ross reveals how celebrities’ armpits are almost always photoshopped out on magazine covers and how actress Nicole Kidman’s arm was bizarrely shortened in a photo for fashion brand Balenciaga.

@caroline_in_thecity I wonder if her dress is also non-stick? #maybeitsphotoshop #carolinesediting ♬ original sound – Caroline In The City

Ross, who is based in Vancouver, Canada, speaks to PetaPixel about her mission to educate people about Photoshop.

The photographer also reveals the telltale signs that an image has been altered.

Nearly Every Celebrity Image is Retouched

As an experienced commercial photographer and photo retoucher, Ross can usually tell what has been edited in an image immediately. However, she realized that others are not so wise to the widespread use of Photoshop in today’s media.

“I realized most people don’t understand the amount of Photoshop that’s applied in media today,” Ross says. “This encouraged me to start creating TikToks about Photoshop on images.”

@caroline_in_thecity To everyone who looks like Beyoncé from the behind the scenes video, you’re enough exactly how you are. ❤️ #medialiteracy #digitalmedialiteracy #maybeitsphotoshop #photoshoppedcelebrities #carolinesediting #greenscreen ♬ original sound – Caroline In The City

She says: “Nearly every published image of celebrities is retouched. It’s more prevalent on photos of women over 50. Women in media aren’t allowed to age.

“Retouchers try to hide all signs of Photoshop. For example, a 60-year-old plus woman may still have a few wrinkles in the published image, as removing all of them would look too fake. This often tricks viewers to think that the image is real, as there are wrinkles in the image.”

@caroline_in_thecity I did a really quick edit on this photo to bring back #EvaLongoria ‘s features. #carolinesediting #maybeitsphotoshop ♬ original sound – Caroline In The City

She adds: “Digital media literacy is about reading and analyzing digital media. My TikTok aims to help people apply critical thinking to photos and discern what is real and fake in images.”

Ross, has over 106,000 followers on TikTok. Although the photographer doesn’t follow many celebrities on social media, her followers send her images to analyze for Photoshop. She will then attempt to find hard “proof” that the celebrity photo has been edited.

“On TikTok, someone will ask for an analysis on a recent celebrity magazine cover or photoshoot they saw and I talk about the photoshop (or lack of it) in the photo,” Ross explains.

“Through many years of photographing people, and then Photoshopping them, I can usually tell by looking at an image whether or not it’s been Photoshopped.

“In order to create the TikTok videos, I like having ‘before’ images of the celebrity and use paparazzi photos and images taken at recent events, as well as images from fans sightings on social media. I also try to find behind the scenes videos of the photoshoot for proof that it’s been altered.”

@caroline_in_thecity If anyone wants a part two on other photoshopping in the ad, reply in the comments. #maybeitsphotoshop #medialiteracy #tyrabanks ♬ original sound – Caroline In The City

Ross says there are some giveaway signs that a celebrity’s image has been Photoshopped.

She explains: “A telltale sign is when frequency separation is evident in the texture of the skin. When done poorly we can see areas of smoothness beside textured areas or the same spot cloned multiple times.

“Other signs of Photoshop on the body when the areas closest to the model’s waist is curved or warped such as arms. Often, our elbows sits near our waists and this area can appear large because the waist has been pulled in.”

@caroline_in_thecity There is a name for the inner elbow, however based on my track record I’m not going to attempt to pronounce it. #maybeitsphotoshop #photoshoppedcelebrities #howtoreadanimage #digitalmedialiteracy #bodypositivity #greenscreen ♬ original sound – Caroline In The City

Ross says that some celebrities seem to edit their images far more than others — most notably the Kardashian family.

The photographer explains: “The Kardashians are some of the worst culprits for Photoshop.

“However, the Kardashians themselves are unique and extreme and people love them.

“The Photoshop the Kardashians do isn’t unique or extreme. They do skin softening and body modifications.”

@caroline_in_thecity It doesn’t take a professional to see that something in this area has been edited 😒. #maybeitsphotoshop #photoshoppedcelebrities #letwomenbe #bodypositivity #photoshopfree #greenscreen ♬ original sound – user90949923397

She adds: “Because they have so many followers, people notice the bad Photoshop immediately. Perhaps it appears they Photoshop more than other celebrities, but, in reality, they’re just getting caught Photoshopping more.

“Celebrities in their late 40s and 50s are also very often shooting with skin softening filters on their videos and photos on Instagram.”

Ross believes that Generation Z are less likely to Photoshop their images.

“I think Generation Z Photoshops less because it’s the trend of the generation,” Ross explains.

“They see overly filtered and ‘fake’ content from their parents’ generation and they want to be different. SOOC and RAW images are the trend on social media photo dumps for Generation Z.”

@caroline_in_thecity Replying to @user8618809211221 if I were a celebrity hiring a body double, I would make sure it has my ideal body at least, that way I wouldn’t have to photoshop it. #britneyspears #maybeitsphotoshop ♬ original sound – Caroline In The City

While Ross is an avid user of Photoshop, the photographer thinks that there should be more transparency about its usage.

“When celebrities photoshop their images and post them on social media, their main audience is fans, millions of fans, who people don’t see this celebrity in real life,” she says.

“This is an issue when all images from a celebrity are retouched and this unrealistic beauty standard is now being presented as reality.”

Ross adds: “I love Photoshop and use it frequently. But I think when body modifications have been done on images used for advertisements and commercial purposes like social media influencers and ads, there should be a disclaimer at the bottom of the photo stating that the body has been modified.”

Image credits: Header photo by Caroline Ross/Caroline in the City.