A team of photographers built a super fast f/0.3 29mm lens from a Leitz projector lens to shoot a beautiful short film.

Achieving an aperture of less than f/0.5 is technically impossible, but the team at Media Division created the “Impossible Lens,” an f/0.3 29mm equivalent lens.

“The journey started three years ago after we finished our f/0.7 project. Could we get an even more dramatic depth-of-field even in wide-angle shots?” He says.

“After experimenting with ultra-large format (Spy Plane Lens and one square meter ground glass) we settled for a more practical approach, that would still allow going on location. 8×10 would be our format.

“Fortunately, we already had a fitting lens for the project. A Leitz 300mm f/2.8 that would generate a depth-of-field/field-of-view equivalent to a 29mm f/0.3 on something like an Alexa.

“The practical part kicked off about a year ago, with the build of the camera. Trying different things, experimenting with glasses, lenses, fresnels, bellows, it was a long stony road.” 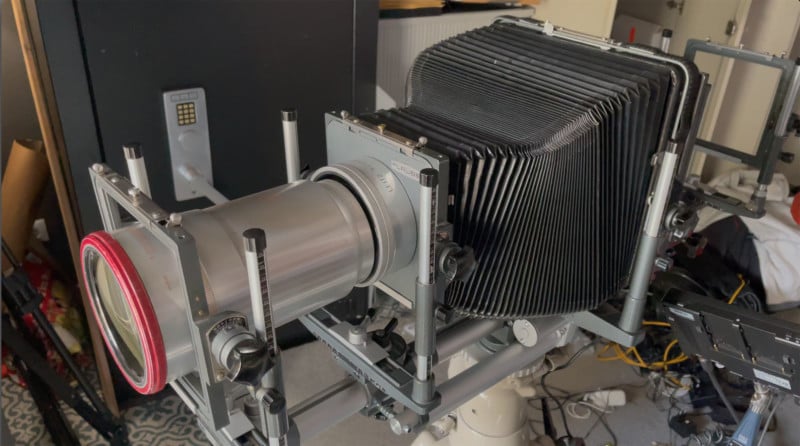 Moldenhauer says that the team realized early on that the focus system would be “make or break.”

He says: “Without being able to pull focus, a movie camera would just not give us what we needed.

“Again we experimented with different solutions and settled on a Servo Actuator with a mechanical gearbox on the controller.

“The system allows you to focus the 5.5 kilograms (12 pounds) heavy lens/matte box block without touching the camera (which would cause visible vibrations). The precision is so good, that focus remained manageable during the shoot.”

After Moldenhauer had established the Frankenstein camera setup, they needed to find something worth shooting.

“We wanted human bodies to display the shallow depth of field. Only this kind of depth of field Camera would allow a depth of field so thin, that it would separate a hand from a face even at a distance,” he says. Inspired by a Caravaggio painting, he decided on a model floating in the water.

“We had to wait until summer to be able to shoot on location and in the pool without freezing our actor Max, and it was still an endurance challenge for him,” he says.

“A friend of mine owns a pool with underwater windows, perfect for us. We just had to black it out to get the feeling of deep water.”

The resulting short film entitled The Iron Sea is an aesthetic feast. To see the full video and behind-the-scenes, and for the full explanation as to how the camera is built, check out the video at the top of this page.

Update: This article has been amended to clarify that the lens is an equivalent lens. An aperture of less than f/0.5 is impossible.