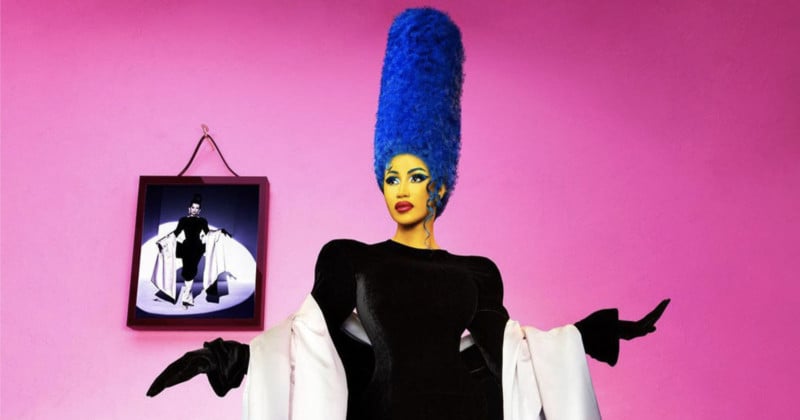 Rapper Cardi B is being sued for posting a Marge Simpson photograph that allegedly copies another artist’s work.

On October 31, Cardi B posted a series of images on Instagram taken by photographer Jora Frantzis in which she dressed up as the cartoon character Marge Simpson for Halloween.

Artist aleXsandro Palombo is claiming that one of Cardi B’s photographs is directly lifted from a piece in his artwork series, Marge Simpson Style Icon that he designed in 2013.

Palombo’s collection of images, which were first published in Vogue in 2013, showed the Simpsons character posing in a series of classic outfits.

In the photograph posted on Instagram, Palombo says that Cardi B is copying her image of Marge Simpson in a 1995 Thierry Mugler dress.

Palombo also claims that the rapper and her photographer, Frantzis shared his picture on social media without credit.

The artist writes: “Dear Mrs Cardi B, based on your reasoning, shall everyone illegally download your music?”

In a statement to Newsweek, Palombo’s lawyer, Claudio Volpi of Barberi & Volpi, says that the artist is taking legal action against the American pop star and her “closest collaborators” for unauthorized use of the artwork.

“Cardi B has illegitimately appropriated the work of aleXsandro Palombo for mere business purposes in defiance of the most elementary rules on copyright and Instagram policies, with the consequent serious risks, both of compensation and of discredit for her public image,” Volpi says.

In a separate statement, Palombo tells Newsweek: “Cardi B and her collaborators have used my artwork without any authorization, debasing its original meaning and only to amplify their image with a clear commercial purpose that has nothing to do with that path of social awareness that has always characterized my works.”

Earlier this year, PetaPixel reported on a plagiarism debate that ensued online after an artist was accused of copying the work of a photographer in a painting that was on display at Guggenheim Museum Bilbao.