During his recent trip to Iceland, landscape and adventure photographer Michael Shainblum managed to check a decade-old subject off of his photography bucket list by capturing some incredible images of lava during a volcanic eruption in Fagradalsfjall.

In a 15-minute video, Shainblum shares some of his landscape, timelapse, and aerial images that he captured at the breathtaking location and discusses some of the challenges he encountered during his time there. He also provides some tips for those who plan on making the trip themselves, including tips on which lenses to use, how to get the best focus through the intense heat waves, and even why you shouldn’t fly a drone near lava unless you plan on retiring it after the flight. 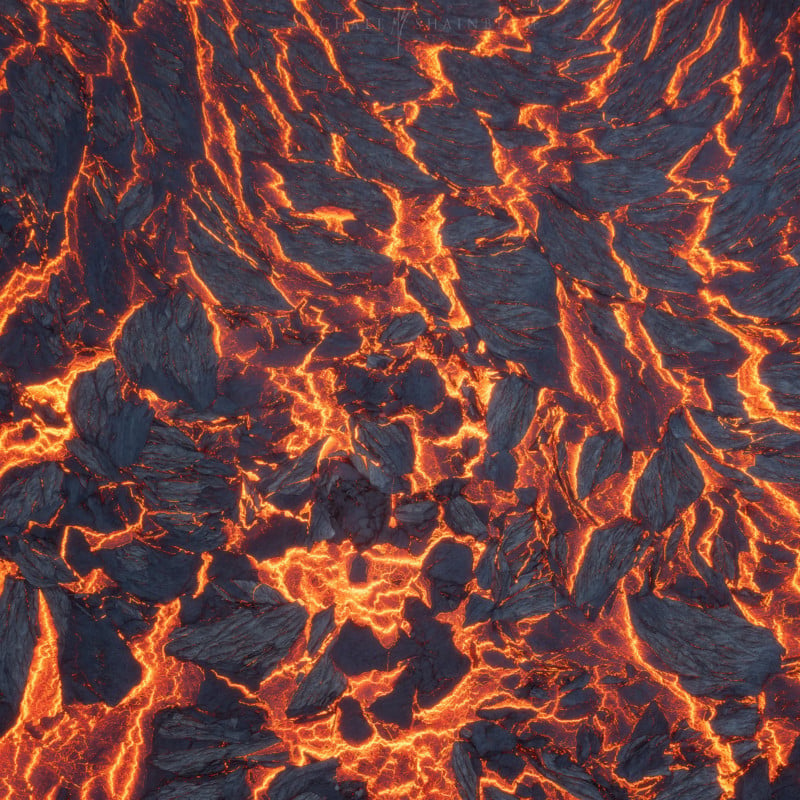 Beginning with a 100-400mm lens, Shainblum wandered around the location and found what he though were interesting vantage points and leveraged the maximum zoom of the lens to compress the layers and textures. Since the plan was to capture as much of the texture as possible, long exposures were scratched off of his shot list. Bumping the ISO and dropping the shutter speed down (along with the aperture) while focusing to infinity allowed for some interesting compositions, however, with the extreme heat, the images started to look out of focus, and that’s because there was so much atmosphere around the lava with the smoke and haze from the heat. Shaninblum says things got a bit tricky to stay sharp no matter what settings were used. Compensating for this, he moved to a variety of perspectives from eye level to slightly above to find a view where a sharper shot could be achieved. 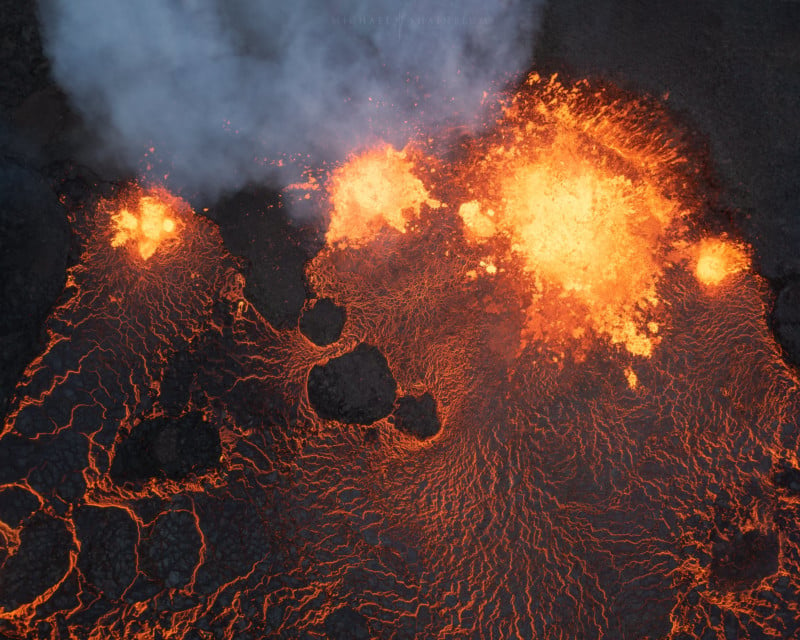 After shooting from the ground for a while and setting up a timelapse, Shainblum then decided to take to the skies with his drone for some aerial views of the volcano. He says “the different perspective was amazing and offered endless composition opportunities,” even letting him capture his favorite “dragon-shaped lava flow” seen below. The challenge he faced while in the air was having to set up panoramic and composite images, effectively taking images exposing for the sky and terrain while doing an additional set of images exposing just for the lava flows, and then blending them together. Additionally, Shainblum recommends changing out the memory cards in your drones regularly (even on the same flight session) as you never know what can happen while the device is in the air. While the drones can be pricey, they are at least replaceable, while your shots may not be. And this proved to be good advice for him as well, as his drone did not emerge unscathed. 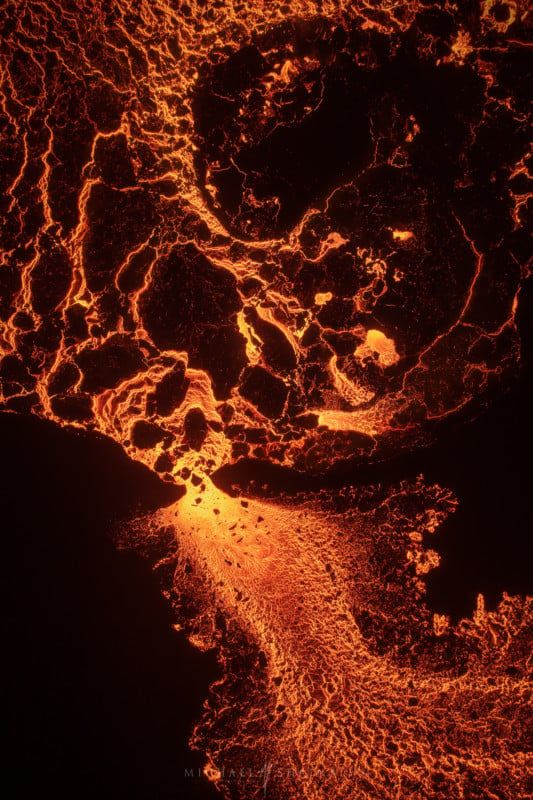 Even though he says the images were absolutely worth it, Shainblum managed to melt his drone while shooting photos and videos on this particular adventure. After capturing some of his favorite images from the sky, the DJI Mavic 2 started to throw some critical temperature warnings on his screen which prompted him to quickly return the drone, which is where he noticed that the damage was already done. 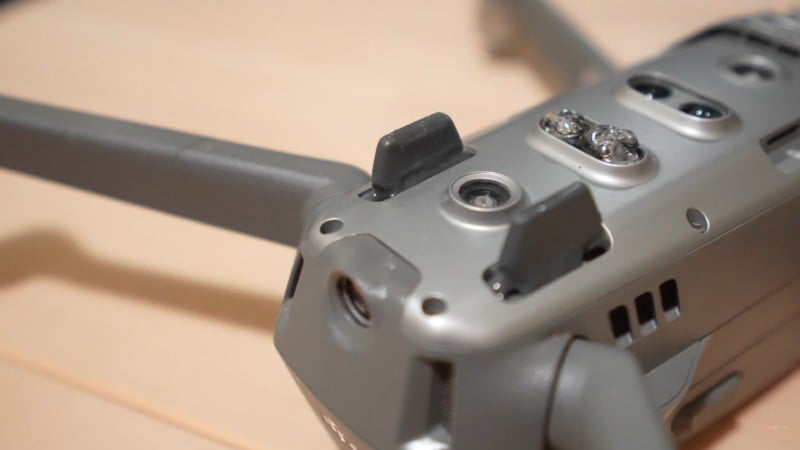 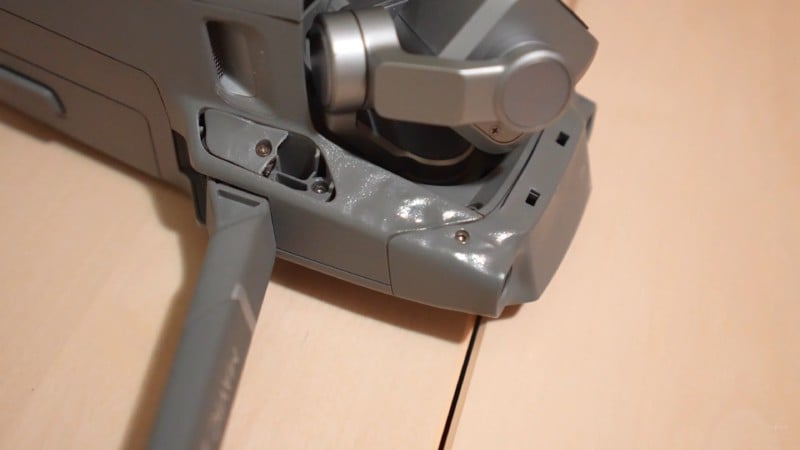 Shainblum says that while he wouldn’t recommend doing this with a new drone, at the end of the day the footage and images were more than worth it to him as they will be something he can cherish and remember for the rest of his life. More of Shainblum’s educational videos can be viewed on his YouTube Channel and his photographic and video work can be found on his website and Instagram.