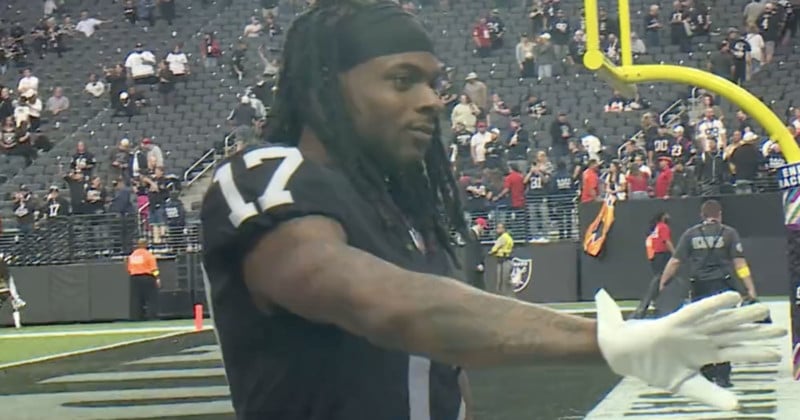 NFL player Davante Adams took no chances while leaving the field of play by carefully clearing photographers out of his way after he was charged with a misdemeanor assault for shoving a cameraman.

The Las Vegas Raiders star was exiting the pitch on Sunday and as he approached gathered media he wryly beckoned with his hands to make a path for him in clear reference to the prior incident.

Raiders WR Davante Adams didn’t take any chances leaving the field after the game yesterday against the Texans… pic.twitter.com/pp22LxEH37

Adams was in a better mood than when he shoved the photographer over in Kansas. No doubt helped by the fact his team had just beat the Houston Texans 38-20 at the Allegiant Stadium.

After making a path, he was seen sprinting down the tunnel with a big smile on his face and politely stopped to sign a shirt that someone had dropped down from the stands above, joking and throwing merchandise to the fans.

Kansas City Police charged the wide receiver with a misdemeanor assault for intentionally inflicting “bodily harm” after he shoved the freelancer while leaving the field in a bad mood two weeks ago.

According to Fox News, the photographer claims to have suffered “whiplash and headache” from the incident and possibly suffered a concussion.

“I want to apologize to the guy running off the field, and he ran and jumped in front of me,” Adams said of the incident.

“I’m coming off the field and I bumped into him and pushed him. I think he ended up on the ground, so I want to say sorry to him because that was just frustration mixed with him running in front of me and I shouldn’t have responded that way and that’s how I initially responded. I want to apologize to him for that.”

Adams seems to not be too worried given that he is making light of it, but he could still face discipline from the league for his behavior.

Also on Sunday, at a college football game, was a photographer caught up in an assault, but this time it was the lensman initiating the attack.

During Penn State’s game versus Minnesota, a fan ran on to the pitch and a photographer took matters into his own by taking the pitch invader down.