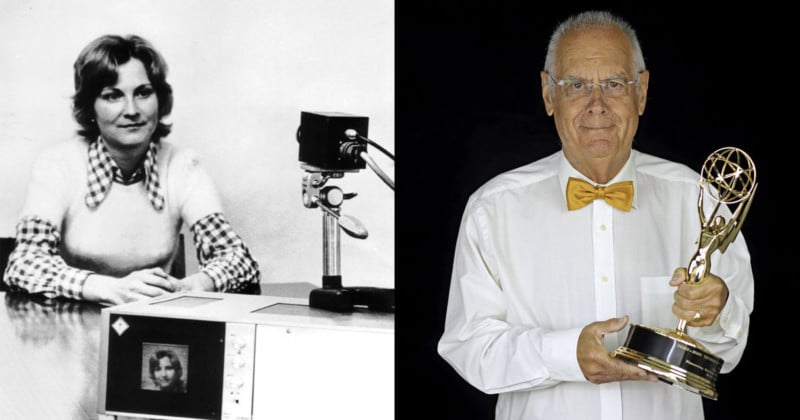 81-year-old Noble tells PetaPixel from his home in Dorchester, England that he considers himself to be “one of two or three fathers of digital photography,” but he never made a penny from his invention.

In 1966, Noble took a job at Plessey, a general electronics company, and took charge of a team that was tasked with creating a 72×5 solid-state sensor that ran five outputs with a five-megabyte lineup.

“In rough terms, it was impossible at that time,” explains Noble.

Laying the Foundation of Digital photography

Early on, the team realized that cleanliness was an issue owing to the extreme scale that the engineers were working on. With elements that only measured 10 microns, a single speck of dust could destroy a product, meaning a deep clean had to be carried out before work could commence.

Also facing the team was the lack of technology that engineers take for granted today. There was no Computer Aided Design (CAD) system or any type of personal computer whatsoever. Not even handheld calculators existed which meant that the original designs were all done by hand on a piece of paper.

“It should be remembered that at that time there was no such thing as the internet, facsimile transmission, or even a telephone service that was readily affordable internationally, so our work was carried out in almost total isolation,” explains Noble.

“All I had for reference was published papers in various learned journals.”

Noble had very little experience with microelectronics when he joined Plessey and therefore had to learn about MOS technology.

“I couldn’t work out why I was headhunted until years later, it was because of my background with optics and sensors,” Noble says.

Beginning on May 1, 1966, Noble and his team tried to find a way of implementing the difficult task of creating a solid-state 72×5 sensor.

“We came across the idea of using the diode as the sensor, and by connecting the diode to the gate of a MOS device effectively adding an amplifier of the signal,” he explains.

“The ‘charge’ line charges the diode (and the arrows show the light coming in). The diode is connected to the gate of the MOS device, and you have the active pixel. The ‘sample’ line switches the signal to an external amplifier – so you scan the line of diodes sequentially.”

By extending this complex theory Noble and his team invented the active pixel.

Breaking Out on His Own

Noble left Plessey after it had lost interest in the potential of the active pixel and he set up his own company to carry on the research.

“I took it to people and nobody showed the slightest bit of interest, it was very depressing I thought we had something big time and we did but we couldn’t do it,” he says.

“It comes back to national differences if you look at this country at the time, we were not that long after the war, and people weren’t prepared to take any risks and the attitude in Britain was don’t take any risks that might have a gestation period of longer than a year or two and this was 15 or 20 years.”

After setting up Integrated PhotoMatrix Limited, so he could pursue his interest in the active pixel sensor, Noble made the world’s first image with a MOS sensor.

“We managed to make a crude camera, 72×72, 4,096 pixels with scanning built in. We made a dummy television system so we could focus it on somebody and show the image on the screen,” Noble explains.

The team had no way of recording the image that was being transmitted to the screen but it was the world’s first digital image on a screen.

While Noble was busy creating the active pixel, which would lead directly to CMOS sensors, similar work was being done that would lead to the CCD sensor, the other main type of sensor used in modern-day digital camera equipment.

“A lot of people were working on the same tech at the same time and an American company was working on it and they wanted me to join them,” explains Noble.

A recent PetaPixel article detailed how Steve Sasson, a Kodak electrical engineer, invented the digital camera by using a CCD sensor with a camera that recorded photos via a cassette tape.

The term active pixel sensor was coined by Tsutomu Nakamura while working for Olympus in 1985 who implemented a charge modulation device thanks to MOS technology reaching smaller micron and then sub-micron levels.

Recognition, But No Bag of Coins

Despite creating such a crucial piece of technology that almost 70 years later is used in smartphones, mirrorless cameras, drones, and many other devices, Noble didn’t make any money from his invention.

“My sense of humor suggests wouldn’t it be nice if they all gave me a penny,” he says wryly.

“Nothing was patented at the time, it’s free issue. And for what it’s worth, the cost of patenting put it out of court.”

Shockingly, Noble’s work was largely forgotten for decades until he received an email that read “Are you the Peter who developed the active pixel, and are you alive?”

The email led him to give a keynote talk at the International Image Sensor Society. Without that out-of-the-blue message, he may never have been discovered at all.

When asked if Noble feels put out for not being recognized more he says that it isn’t the issue.

“I really didn’t look back at it and any point and think ‘oh I did that.’ Mentally, I’d done that and let it go,” he says.

“I didn’t follow what was going on, we go back to the era of no Google.”

Noble also says he is not rueful that he didn’t make any money from his invention.

“I can look at it the other way round because it is basically open source. The guy who invented the first polio vaccine refused to patent it on the grounds the world should get the advantage of it, I’m not saying that was my thinking but…”

Noble says that there is a truism in inventing which is: “If I hadn’t done it, someone else would have.”

“There is engineering creativity and fundamental creativity, there is a difference,” he adds.