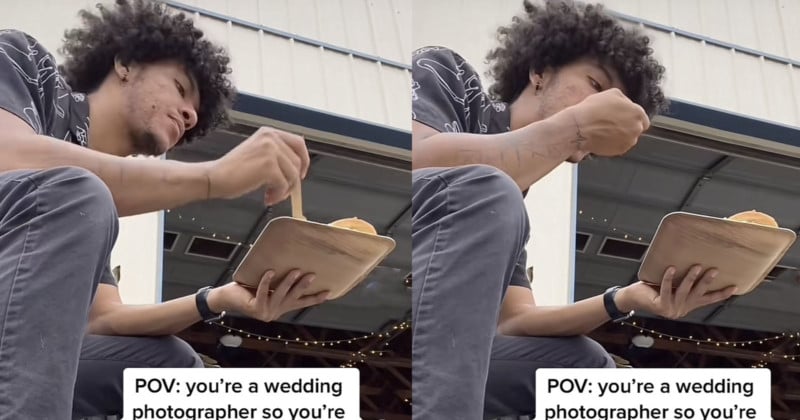 A wedding photographer who posted a video of himself eating his dinner alone while he was on the job has sparked a lively debate on social media.

Photographer and cinematographer Julian Troncoso tells PetaPixel that he did not expect to start an online discussion around the ethics of making wedding photographers eat their meals by themselves when he shared the lighthearted clip on TikTok earlier this month.

In the video, which racked up 4.1 million views on TikTok, Troncoso can be seen dining solo at a wedding, away from the other guests, alongside the caption “POV: you’re a wedding photographer so you’re used to eating alone during dinner in the corner while everyone engages in conversations.”

The clip drew thousands of comments from TikTok users and sparked a conversation about the etiquette with wedding photographers. The majority of viewers were left saddened by Troncoso’s clip and vowed to make sure their future wedding photographer ate at a table with the other guests.

“This is why when I get married my photographer will have a spot at a table,” writes a viewer.

Another user comments “If my wedding photographer doesn’t feel like they’re a part of the family at my wedding we didn’t do it right,”

“Nah my wedding I’m not allowing the photographer to be alone,” an individual comments. “He captures the moments for us so we gotta feed him and make him feel it in return.”

A shocked viewer says “I never realized it’s like this. I would never!” — while another moved TikTok user remarks “most people don’t see this side of a job. I appreciate your work.”

Meanwhile, other TikTok users said that wedding photographers should expect to eat alone as they are getting paid to work.

“That’s the job,” writes a viewer. While another user says Troncoso should be happy for getting “free food.”

Troncoso, who is based in Philadelphia, Pennsylvania, tells PetaPixel that he never expected such a reaction to his TikTok video. The photographer, who has been shooting weddings for over three years, says he posted the tongue-in-cheek clip as part of a trend on TikTok.

“I actually got the idea from the original sound I used on the video itself. The ‘trend’ is to show situations where you find yourself eating alone and once I realized I do that at almost every wedding (with the occasional coworker) I knew it would fit perfectly,” explains Troncoso.

“While the video itself was mostly intended to be light-hearted, being alone at weddings is definitely something me and coworkers talk about is one of the least fun aspects of capturing someone’s special day.”

“I half expected if I got any response or engagement on the video it would be from other photographers who have also experienced it, but reaching over 4.1 million views and gaining something like 10k followers was the last thing I expected!” He adds.

Troncoso says that he was blown away by the mostly positive response to his video and the subsequent interest in his wedding photography afterward.

“I’d say something like 80 percent of the comments on the video are people feeling bad and saying that it made them sad to see me eat alone or saying that they didn’t realize this happened or wishing they could’ve come and sat with me,” says Troncoso.

“Other than that there were definitely people who said that I should ‘suck it up’ or that ‘at least you’re getting paid,'” he says.

“While some people had some back and forth with each others’ viewpoints on the subject, the general consensus was just feeling sorry for me or saying that they now know to reserve a table for their wedding vendors in the future (which I take as a win).”

Troncoso says he loves being a wedding photographer and does not mind eating alone on the job.

“At this point, after three years and over 150 weddings, it’s something I’ve grown to not really get bothered by. I can always appreciate when our lovely couples reserve us seating but it’s never something I see as a ‘requirement; but more as a nice gesture to show appreciation for us,” he explains.

“Either way I don’t take it personally, but it’s definitely more fun to have a table to talk to in our downtime versus having to find an empty chair somewhere, or even just sitting on the floor occasionally.”

“In the time that I’ve been doing wedding photography, something that has never gone away for me is just the magic and sense of accomplishment when you see that one photo. Sometimes it’s the first kiss, or the first dance, or even just the one of their hands with their rings. But just that feeling of knowing your work that day will forever be an important part of someone’s life is irreplaceable,” says Troncoso.

“As for any downsides, it’s hard to find anything that I can say I don’t like about the job. But I will say the stress of being the one tasked with capturing those once-in-a-lifetime, forever important moments is definitely not for the weak-minded!”

More of Troncoso’s work can be seen on his Instagram, TikTok and check out his Instagram for his wedding photography.