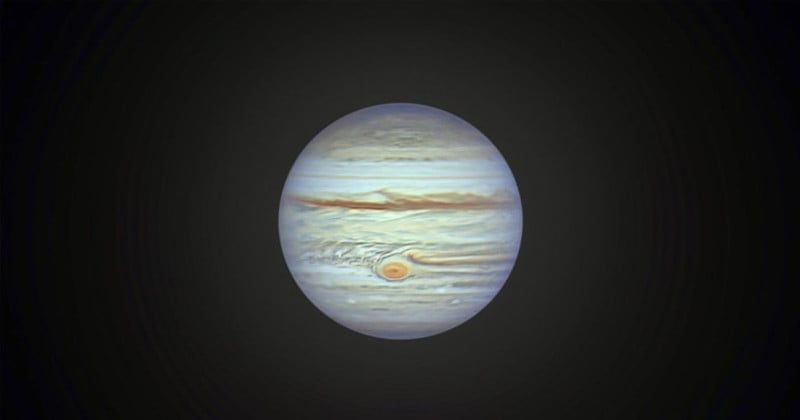 Accomplished astrophotographer Andrew McCarthy captured his “sharpest Jupiter shot”, as the planet comes the closest to Earth it has been for nearly 60 years.

McCarthy “spent all night” shooting an estimated 600,000 photos of the solar system’s largest planet and says he was “thrilled” with the photo.

“This was captured rising an 11″ telescope and a camera I usually use for deep sky work,” McCarthy writes on Twitter.

I spent two consecutive nights shooting Jupiter for hours. Here’s all the images played back in a sequence. You can watch the transit of Io and the appearance of the Great Red Spot. pic.twitter.com/gY1eBtMtvL

The celestial photographer also posted the above video of his images being played back in a sequence where viewers can watch the transit of Io, one of Jupiter’s moons, as well the appearance of the Great Red Spot.

“Viewing Jupiter never gets old. It is a magnificent planet,” McCarthy tells Space.

“And while the number of photos seems like a lot, I was capturing them at about 80 per second, so it went by relatively fast. In all, it took about two hours to snap the photos,” he adds.

The conditions for the night of his Jupiter shoot were particularly good allowing incredible detail to be captured through McCarthy’s lens.

However, there is an opportunity to get even clearer images of the “King of Planets” as today, September 26, Jupiter is closer to Earth than it has been since 1963.

In an email to PetaPixel, McCarthy says he will be “shooting it nightly for weeks, weather permitting.” But the peak is today as Earth finds itself in “opposition” to Jupiter. This is when Earth finds itself directly between the Sun and one of the other planets, which happens yearly, but 2022 is special because of a particularly close orbit.

Even those with handheld binoculars should be able to make out Jupiter’s disk shape, thanks to the planet’s massive size. Astronomers with more powerful equipment should be rewarded with richly-detailed images, weather permitting.