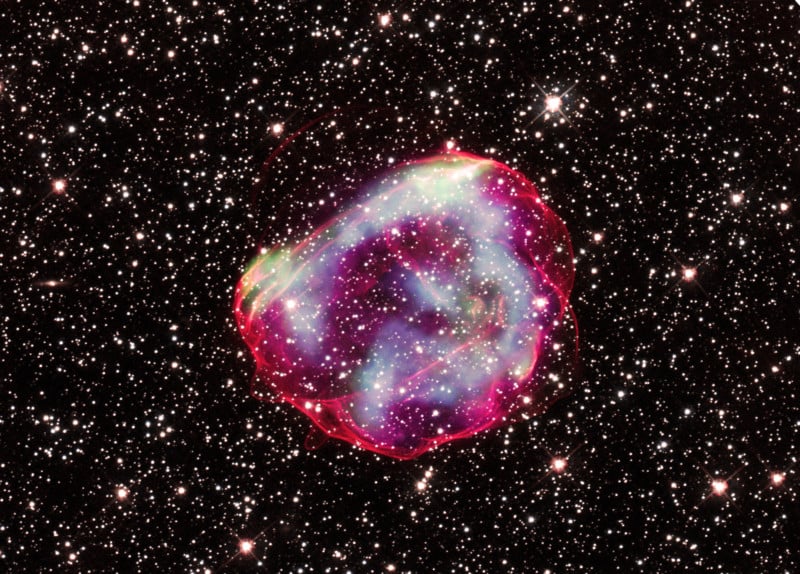 A team of astronomers used three NASA space telescopes to create a composite image of the remains of a supernova that reveals details about the star’s death.

A supernova remnant called SNR 0519-69.0 (SNR 0519 for short) is what remains from a stellar explosion of a white dwarf star that took place several hundred years ago in the medieval period.

SNR 0519, located in a Milky Way satellite galaxy called the Large Magellanic Cloud some 160,000 light-years from Earth, reached critical mass and underwent a thermonuclear explosion by pulling matter from a companion star or merging with another white dwarf.

“This data provides scientists a chance to ‘rewind’ the movie of the stellar evolution that has played out since and figure out when it got started,” Chandra scientists wrote on its website.

To chart the supernova the researchers compared Hubble images taken in 2010, 2011, and 2020 to measure how fast the blast wave moved from the explosion and the data suggests that the light reached Earth around 670 years ago. That would make the year 1352 when the Hundred Years War between France and England had begun to rage and the Ming dynasty in China was establishing itself.

It is estimated that the light from the supernova was traveling at 5.5 million miles per hour but data from the Chandra and Spitzer telescopes suggest that the blast wave slowed down after it hit dense clouds of gas. This means that the initial explosion would have occurred more recently than 1352 and the researchers plan to use Hubble in a bid to pinpoint exactly when the start exploded.

By combining the data from three space telescopes, the astronomers created a composite image of SNR 0519. Chandra is sensitive to X-ray sources with low energies being shown in green, medium energies in blue, and high energies in purple.

The brightest regions in the X-ray data represent the slowest-moving material, whereas areas with no X-ray emissions are associated with faster-moving material, according to the team at Chandra.

While the optical data from Hubble displayed the perimeter of the explosions in red, as well as captured the surrounding stars that twinkle in the background.