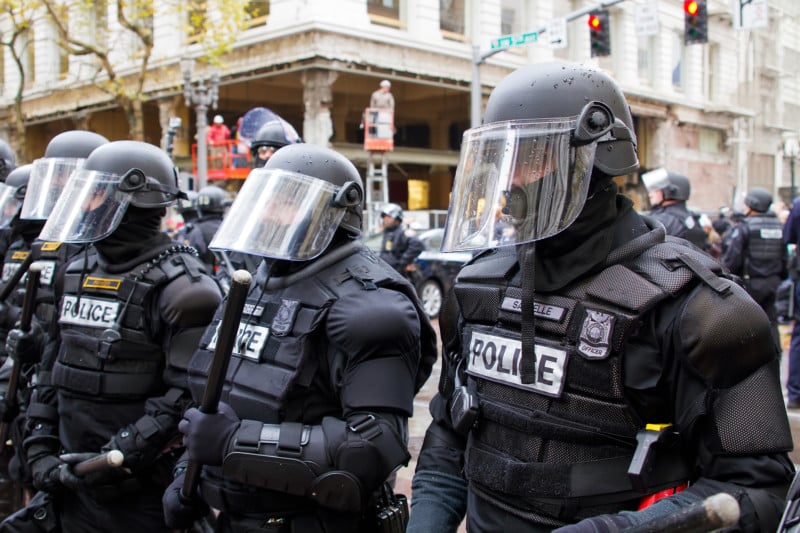 The National Press Photographers Association (NPPA) has joined with the Arizona Broadcasters Association and the American Civil Liberties Union of Arizona (along with eight other media organizations) to file a lawsuit against Arizona’s law that restricts the recording of police.

The controversial Arizona law HB 2319 was signed into law in July and was set to go into effect on September 24. The law prohibits anyone within eight feet of law enforcement officers from recording police activity. Violators would face a misdemeanor charge that carried up to thirty days in jail, though the law states that a charge could only be levied if the photographer ignored a verbal warning and continud to record anyway.

This new lawsuit challenges the law as a violation of the First Amendment and seeks to stop it from going into effect.

In a press release, the NPPA states that the constitutional right to record police engaged in official duties is one of the public’s most effective accountability tools against police wrongdoing and is one of the few ways community members and the media can hold police accountable.

“Over the last decade, the simple act of recording police activity has raised public awareness about police brutality and ignited movements to demand reform across the country. Arizona’s HB 2319 would directly suppress free speech rights, while also limiting public accountability and effective monitoring of government actions,” the organization says.

“We fear that, rather than acting as a shield to ensure ‘officer safety,’ this law will serve as a sword to abridge the ‘clearly established’ First Amendment right to video record police officers performing their official duties in public,” NPPA general counsel Mickey H. Osterreicher says.

“We hope the court will agree and strike down this law as unconstitutional.”

The NPPA argues that the law puts too much power in the hands of individual officers to stop someone from recording them if they don’t want to be recorded. The organization also argues that it makes it nearly impossible to record police in large protests, since protestors may walk within eight feet of a line of police that would be monitoring a protest from all sides.

“At a time when the public is demanding police accountability, Arizona wants to criminalize the public’s most effective tool for shining a light on police violence,” Jared Keenan, legal director of the ACLU of Arizona, says. “This law is not only unconstitutional, it is bad public policy.”

“We have a right to hold police officers accountable by recording their activities in public,” Esha Bhandari, deputy director of the ACLU Speech, Privacy, and Technology Project, adds.

“Arizona’s law will prevent people from engaging in legitimate recording that doesn’t interfere with police activity, and it will suppress the reporting and advocacy that results from video evidence of police misconduct. The First Amendment does not permit that outcome.”

The case has been filed in the U.S. District court for the District of Arizona.