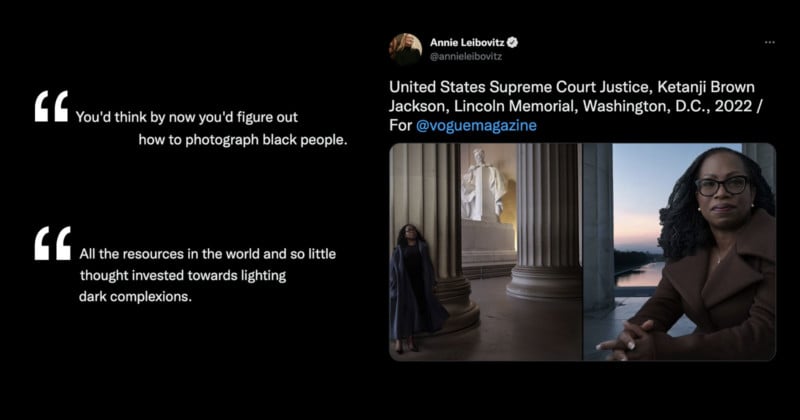 Photographer Annie Leibovitz is facing criticism for her photos of United States Supreme Court Justice Ketanji Brown Jackson as many argue the photos are poorly lit.

On June 30, Ketanji Brown Jackson became the first Black woman and first former federal public defender to serve on the Supreme Court. Leibovitz photographed Jackson to accompany a story published on August 16 for Vogue. The story includes two images, both of which have become heavily criticized online since Leibovitz shared them on Twitter, reports Black Enerprise.

“I really wish this artist knew how to photograph Black people,” another user writes on Twitter.

“All the resources in the world and so little thought invested towards lighting dark complexions,” says another.

Some even go so far as to accuse Leibovitz and the photographer’s post-production team of knowingly and intentionally underexposing or poorly lighting the photo.

“Those pics would be stunning if not so dark. Some feel it was purposely done, but it is a strain to view,” says another in response.

This is on purpose. I mean, it took less than five minutes for both of these, and I know I don't even have the cameras, lighting rigs and software she does. pic.twitter.com/RDvaMOtBXY

“This is on purpose,” Ray Mitchell says accusingly. “I mean, it took less than five minutes for both of these, and I know I don’t even have the cameras, lighting rigs and software she does.”

Ernest Owens, an award-winning journalist and Philly Mag Editor-at-Large, compares Leibovitz’s work against that of a Black photographer.

Guess which one is from Annie Leibovitz.

HINT: It's not the glowing one of Viola Davis being photographed with care, love, and consideration for her beautiful dark skin.

It's 2022 and we shouldn't be having this conversation anymore. pic.twitter.com/6wt5FIXi1W

“Guess which one is from Annie Leibovitz,” he writes. “HINT: It’s not the glowing one of Viola Davis being photographed with care, love, and consideration for her beautiful dark skin. It’s 2022 and we shouldn’t be having this conversation anymore.”

The conversation around Leibovitz’s photos of Black women isn’t new. In 2020, Leibovitz was heavily criticized for her photo of world-renowned gymnast Simone Biles. Many were upset at both the style of the images and the fact that the photos weren’t taken by a Black photographer. Those complaints are echoed in the outcry against Leibovitz’s photos of Jackson.

I adore Simone Biles and am thrilled she’s on this cover… but I hate these photos. I hate the toning, I hate how predictable they are, I hate the social crop here (wtf?) and I super hate that Vogue couldn’t be bothered to hire a Black photographer. https://t.co/az0gLugdzS

This photo of THE Simone Biles for Vogue magazine was taken by “THE” Annie Leibovitz. How a person can work as a professional photographer for decades and still be this bad at lighting and photographing dark skin is baffling to me. Annie are you ok? pic.twitter.com/ycaH9LxsLL

On the other side of this argument, the dimly-lit, low-key look of Leibovitz’s photos can easily be described as her style. Looking at her history, most of Leibovitz’s images follow this trend.

As was the case in 2020, neither Vogue nor Leibovitz has responded to the controversy.