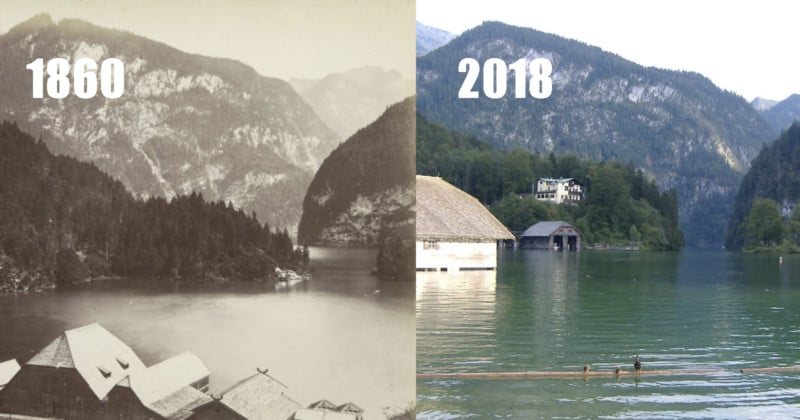 Image search technology is evolving to a point where researchers can gather information on old photos that was previously impossible to attain.

Using these easily available tools, Postma could create context for old photographs taken in the 19th-century that previously had either no date, no location, or no photo credit.

Postma took a digitized photo album, made available by the Rijksmuseum in the Netherlands, that contained images taken across Europe and India in the mid-1800s.

While some of the prints are of well-known landmarks or taken by established photographers of the time. Some of them contained no discerning clues for the viewer.

One of the photos was of a boating lake with peaks in the background. When Postma ran the image through Yandex it returned an image that had been uploaded to Tripadvisor in 2018 of the same lake identified as the Königssee in Bavaria, Germany.

A second image of a picturesque town in the Alps returned a postcard of the Bavarian town of Berchtesgaden from 1911 that someone was selling online. Despite the two images taken from different angles and buildings present, the software picks up on the distinct mountain peaks in the background.

Berchtesgaden is close to Königssee lake so it is easily inferred that they were taken around the same time by the same photographer.

A third image, placed the near the other two images, is clearly also from the same region. However, when Postma ran it through Yandex no results came back.

But, when he used Google Lens, the browser-based software confirmed the hypothesis and brought up the right spot on the Königssee.

The Power of Colorization

Further into the article, Postma runs into an image that cannot be traced through any of the search engines.

To help the algorithm, Postma colorized the photos using the free AI software program Hotpot. The new color image returned a clear match, showing the photo is of the Swiss capital Bern.

As more museums and galleries digitize their collections and make them available online, researchers can more easily access the source material.

The Bellingcat article can be read here.