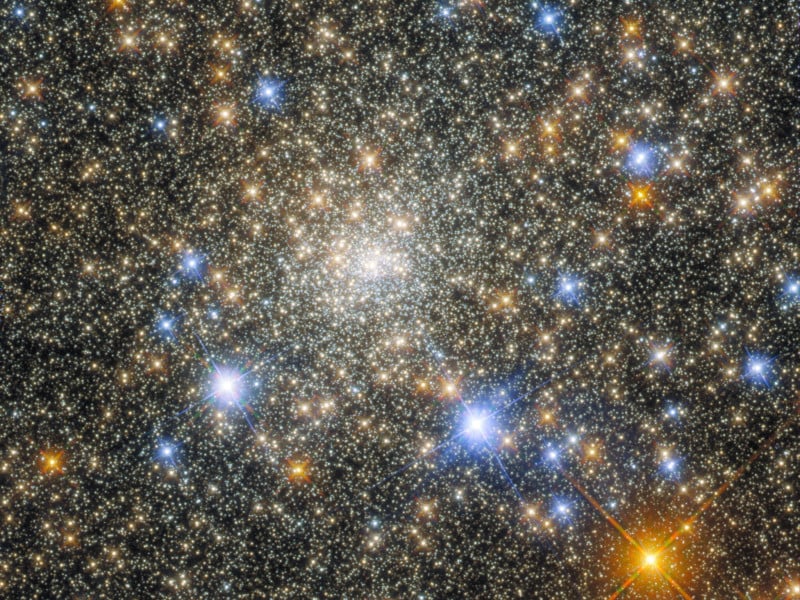 While the James Webb Space Telescope (JWST) is the focus of most space-related headlines lately, Hubble is still hard at work and recently captured this stunning star cluster photo.

The image shows what NASA calls globular cluster Terzan 2, which exists in the constellation Scorpio.

The photo was captured using two of Hubble’s imaging systems, the Advanced Camera for Surveys and the Wide Field Camera 3. NASA says that the photo is made possible thanks to the complimentary capabilities of these two instruments.

“Despite having only one primary mirror, Hubble’s design allows multiple instruments to inspect astronomical objects. Light from distant astronomical objects enters Hubble where the telescope’s eight-foot primary mirror collects it. The primary directs that light to the secondary mirror that reflects the light into the depths of the telescope where smaller mirrors can direct the light into individual instruments,” NASA says.

The Advanced Camera for Surveys (ACS) is Hubble’s most used camera, but it wasn’t part of the telescope when it was originally launched, but was added to the observatory in March of 2022. The ACS wavelength range extends from the ultraviolet, through the visible spectrum, and out to the near-infrared. Hubble recently celebrated the 20th year of the ACS which has captured 125,000 photos in that time and are the source of numerous discoveries.

Hubble has been the backbone of celestial observation for decades and it continues to help scientists and astronomers study the night sky. Even though the JWST has considerably more observational power, Hubble will still be relied upon by scientists alongside the new telescope. In fact, Hubble recently helped scientists reach a major milestone in measuring the expansion of the universe as it has calibrated more than 40 “milepost markers” of space and time over the course of the last 30 years.