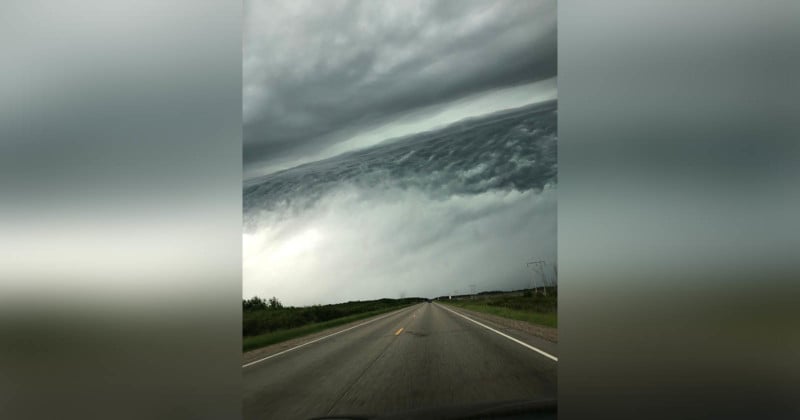 A woman driving home in Minnesota recently captured an incredible photo of an unusual cloud formation that looked like a stormy seascape in the sky.


Theresa Birgin Lucas of Bemidji was on her way home on June 18th after visiting family at a hospital in Rochester, Minnesota. Her daughter was concerned about a storm brewing to the north in the direction Lucas was headed, so Lucas decide to send a photo to reassure her daughter.

“I took this photo while I was driving (oops) and just sent it to her telling her I was not that far from home and just to stay in the basement,” Lucas tells PetaPixel.

The photo was captured on an iPhone 8 and is “straight out of the camera” with no editing afterward — “I really like the beauty in the photo knowing that nothing has been touched,” Lucas says.

“I did not look at the picture until I got home, and my daughter and I decided it looked pretty cool when I was driving — the sky looked like it was going to unzip,” Lucas says. “I am not sure why I was the one to catch that photo but I was.”

After sharing the shot on her Facebook account, Lucas watched in amazement as the picture went viral across the Web over the following days, from appearing on Reddit to getting featured by local and national news outlets.

A Seascape in the Sky

Cropping and rotating the sky in Lucas’s photo shows how much it actually looks like its own seascape scene.

Lucas says she has named her photo Ocean in the Sky and has entered it in this year’s photo contest at the Minnesota State Fair.

“This is a very rare photo,” says KVRR meteorologist Mariah Bush. “My initial thought was maybe some basic clouds, cumulus nimbus clouds, or even a shelf cloud, but then after further looking there are some clouds I have never even seen before myself. So, pretty unique, actually.”

“I am happy so many people are enjoying it,” Lucas says. “It truly was just a quick picture taken off my iPhone 8, which cracks me up. It is a Live Photo — it’s funny to watch it, music playing and bug splats on my windshield!”