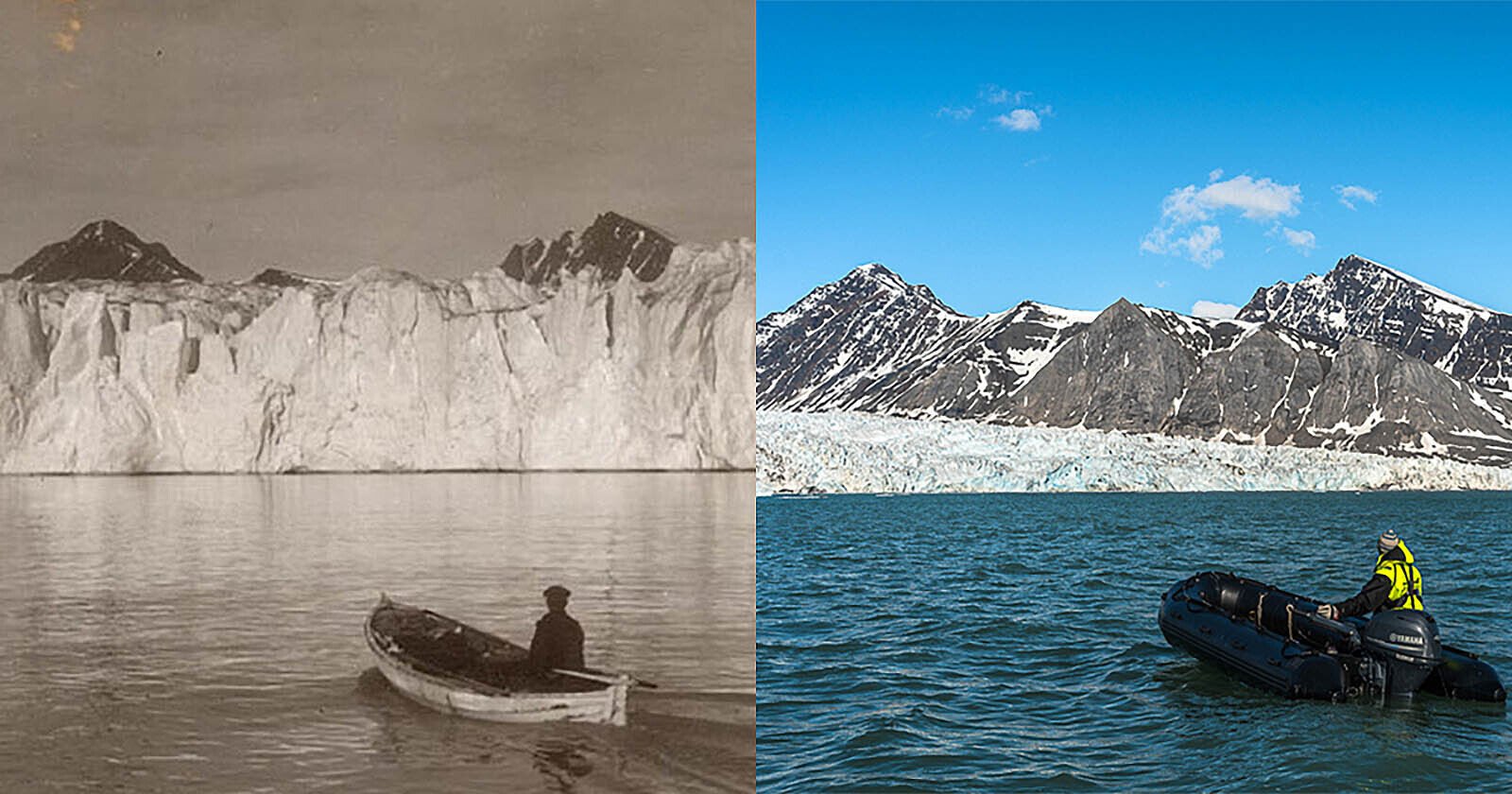 Photographer Neill Drake recreated a photo of a glacier taken in the Arctic over a century ago which highlights its drastically reduced mass and acts as a warning about the effects of climate change.

The Blomstrand Glacier, located in Svalbard, was photographed in 1918 by the Norwegian Polar Institute and shows it as a tall, impenetrable wall of ice.

However, 104 years later, Drake has recreated the image that illustrates a devastating decline that scientists say is a result of global warming. 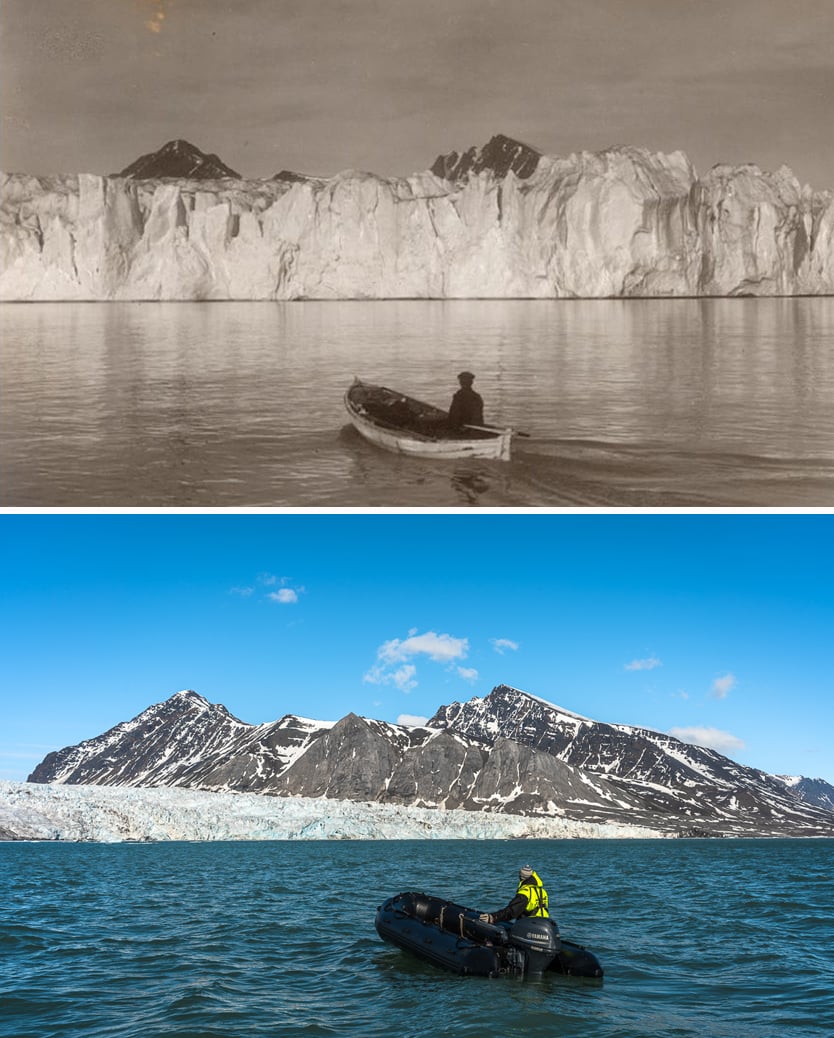 Speaking to PetaPixel, Drake explains how he felt a great responsibility to do the photo recreation justice when he found out he would be visiting the spot where the famous old photograph was taken.

“The first thing I asked myself was: ‘What focal length are we going to use to most closely represent the original.’ I wanted to avoid any sort of lens compression or distortion,” explains Drake. 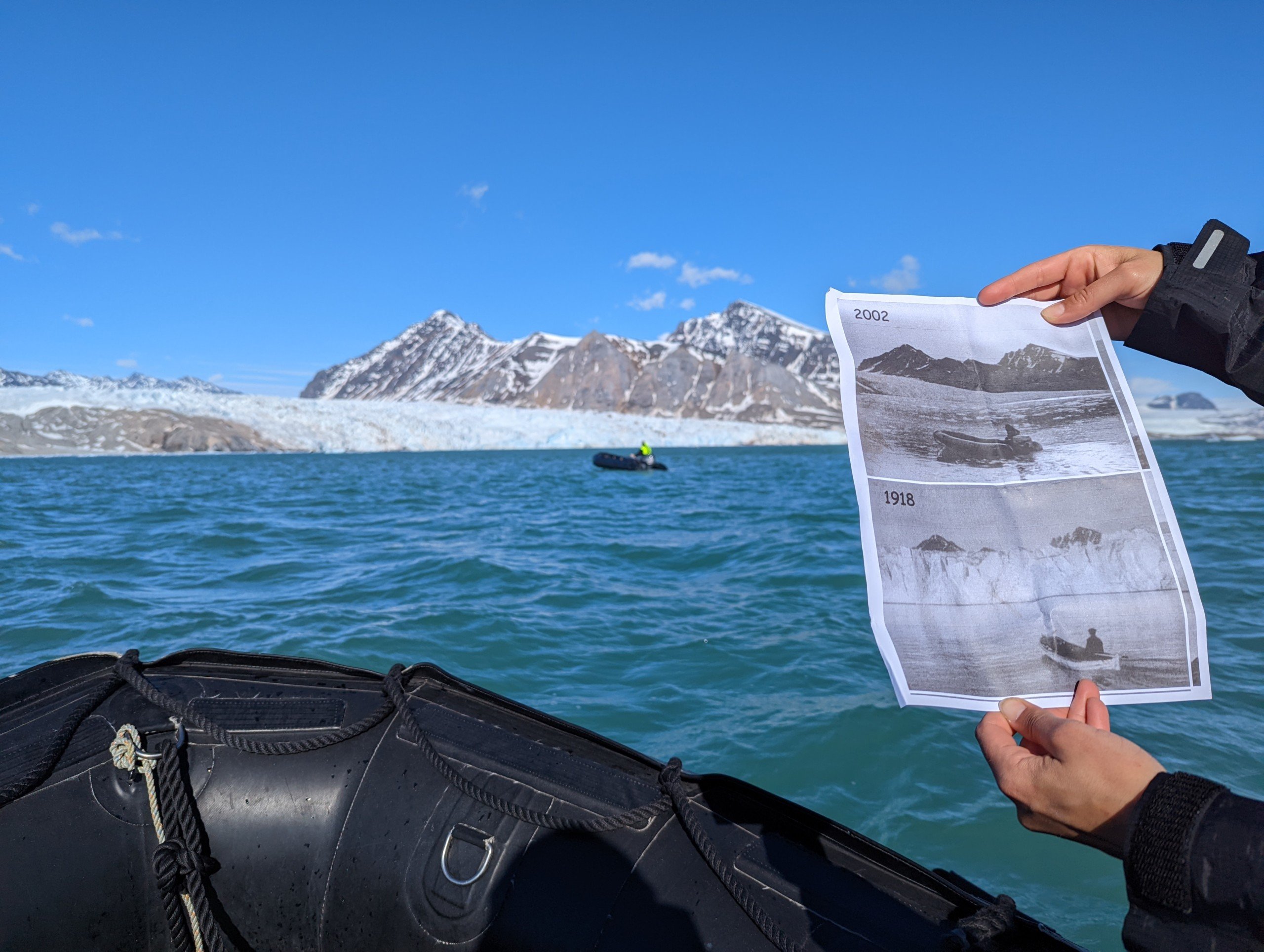 Armed with a printout of the original 20th-century photo as a visual guide, Drake set out to capture as similar a photo as possible.

“Lining up the photo took some time. But I had one visual cue in the photos that stood out to me to make sure we were as close to the same distance as the original as possible as well as at the correct angle,” he says.

“There is a distinct wishbone-shaped snow pattern on the right peak. As we move left and right, it would change shapes or get hidden behind some part of the peak. Once we had the alignment, it just became the closest guess we could to the distance.

“I honestly don’t feel it needed to be exact because the message would be clear either way. Looking at the overlay, I think we nailed the distance spot on.

Drake isn’t the first photographer to recreate the Norway Polar Institute’s 1914 image. In 2008, Christian Aslund recreated the photo which even then served to inform the world to the threat of climate change.

Drake became passionate about the environment after working as a guide in the South Pole.

“I absolutely fell in love with Antarctica and felt a deeper connection with it. I wanted to become a bigger part of the overall goal of the expeditions there which is to promote the conservation and preservation of Antarctica through education programs on the ship from our team of scientists.

“I use my photography as a way to show the beauty of this amazing place and help people understand why it’s worth protecting. I try to abolish the ‘out of sight, out of mind’ mentality. The more I show how beautiful and pristine Antarctica is, maybe people will consider visiting themselves.”

Drake says he has witnessed dozens of glaciers receding or disappearing altogether but says the shock factor has worn off him.

“It’s all about putting out as much of this information as I can and sharing the message,” he says.

“It doesn’t mean it’s any less sad or tragic for me, or that I’m jaded. It’s just frustrating; especially when climate change deniers get loud and start making baseless claims they heard from some joke of a Youtuber,” he adds.

“I wish people would get off their couch, go see the world and go learn something with their own eyes. It frustrates me that people just don’t want to acknowledge the evidence,” Drake continues.

“99.9% of credible scientists all support the fact that climate change is happening, and it’s real. Then some discredited conspiracy theorist scientist puts out one article that this is just ‘the world in a normal cycle’ and then that’s who these people will back to. It drives me absolutely bonkers.”