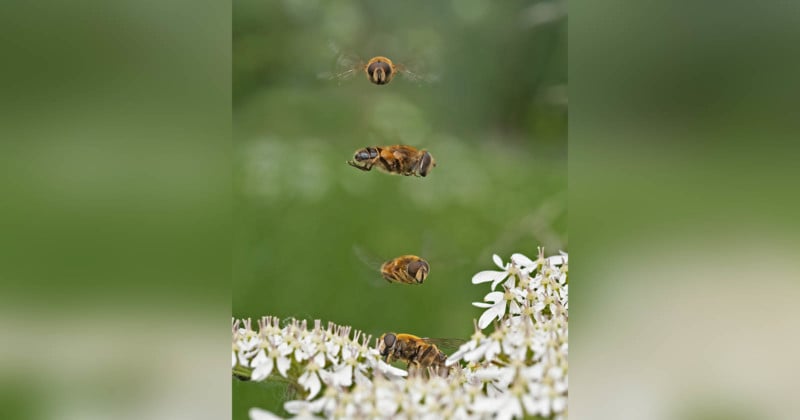 A nature photographer has captured a remarkable one-in-a-million macro photo of four hover flies aligned in a perfect mid-air formation.


The photo looks almost like something out of an entomology textbook, as each of the four flies is facing a different direction, giving the viewer a nearly 360-degree look at the body of the species.

Photographer Jamie Thorpe recently captured the photo in Bungay, Suffolk, UK, after noticing two of the hover flies. They were engaged in a lek mating ritual in which males of an animal species gather to perform courtship displays at the same time and females survey the prospective partners to choose which one they wish to mate with.

After overexposing his initial photos, Thorpe paused to adjust settings on his camera, and that’s when two other males arrived to form a dancing column. As they performed, Thorpe was able to snag a photo of them lined up vertically over the flowers. 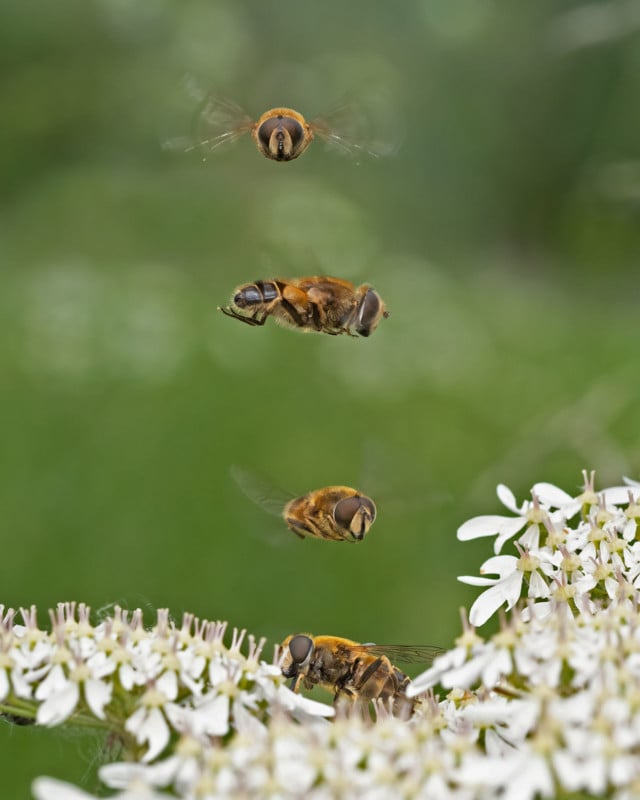 “It really is a one in a million shot and I am really chuffed,” the photographer says. “I was photographing other insects and noticed them out of the corner of my eye.”

The Role of Luck in Nature Photography

For the 46-year-old Thorpe, a hobbyist photographer who works full-time as a painter and plasterer, this shot is a perfect example of how luck can play a big role in nature and wildlife photography — so much of what goes on in front of a camera is outside a photographer’s control.

“This isn’t the sort of picture you can really plan, but they managed to stay still enough for me to get the shot,” he says. “I love macro photography because things look so cool when they are magnified, you see details and colors that you would not be able to see with just your eyes.”

The photo may look like some kind of digital manipulation, but it’s a single shot captured at the right place and right time.

“Many people thought that this was a composite image that I had put together, but it really just was a lucky moment,” Thorpe says.

There are over 280 hover fly species in the United Kingdom, and they are often confused for bees or wasps due to the similarities in their yellow and black patterns. They are typically found between March and November each year, living out their lifespan that averages just twelve days.