Janssen is a Dutch photographer who often spends weeks to months at a location, shooting destinations around the world. When he first picked up his DSLR at the age of 30, he mostly focused on the beauty of the world around him, from cities to landscapes, often observing the sky.

“But rather than that perfect moment in time, it was time itself that fascinated me,” Janssen tells PetaPixel “I found myself shooting a series of a sunset to capture the change in colors or a series of wild morphing clouds. So uninteresting for the viewer, who just sees the same photo over and over.”

Two years later, when shooting a storm with a friend, Janssen discovered timelapse, which he found to be the perfect method to “capture time.” 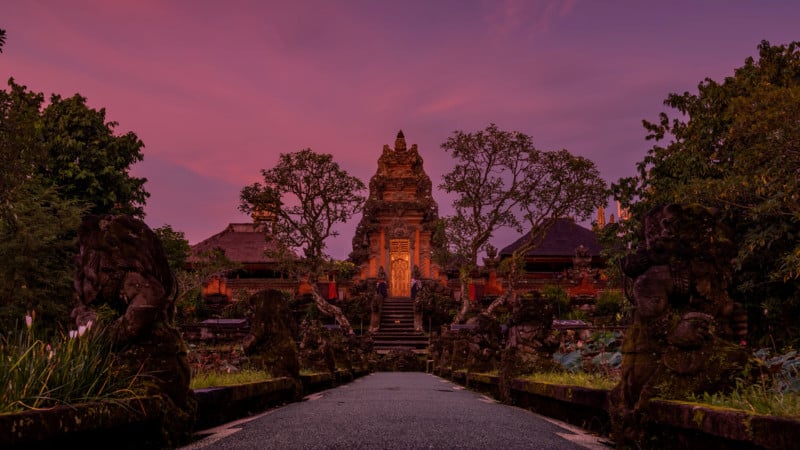 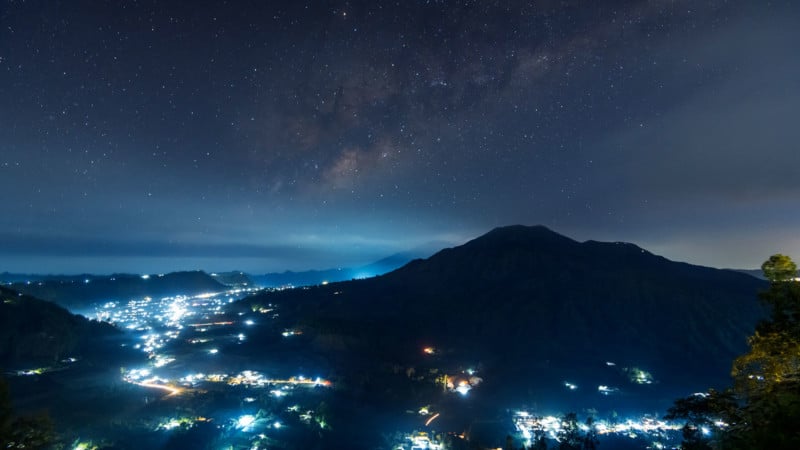 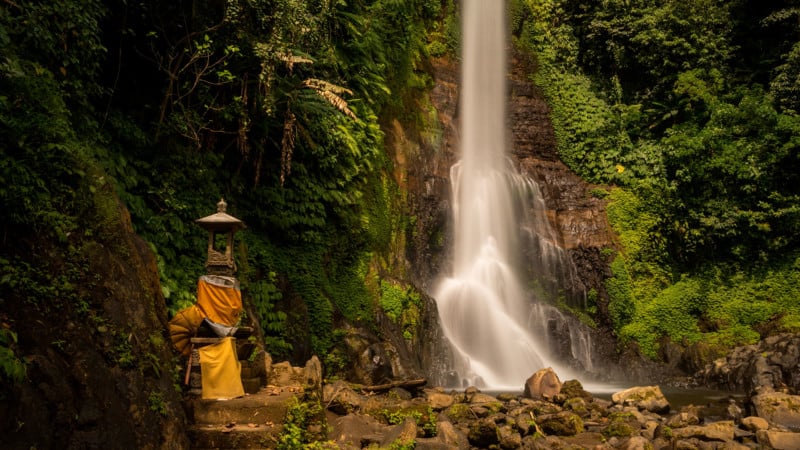 “So here we are, dozens of videos later. What I like to do most with timelapse is create videos of certain locations or countries,” he explains.

“There’s nothing better, to me, than to travel to a beautiful place and stay a few weeks or months to work on a timelapse or drone project while exploring it.”

Plenty of Footage for One TimeSlice

While thinking about different ways to use his footage, Janssen started brainstorming and turned to blending, used for star trail shots, and slicing, which shows multiple points of time within the same frame. With that in mind, Janssen started his TimeScapes project.

For the TimeSlice, Janssen realized he needed dozens of long day to night and night to day recordings, even despite already having a few hundred timelapses. 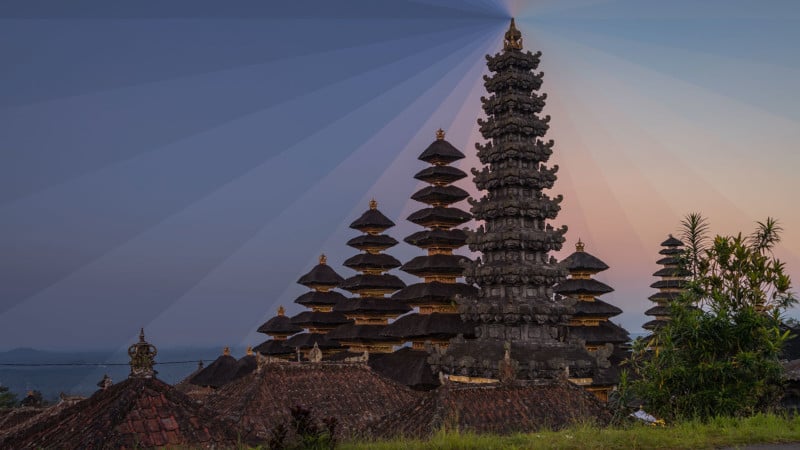 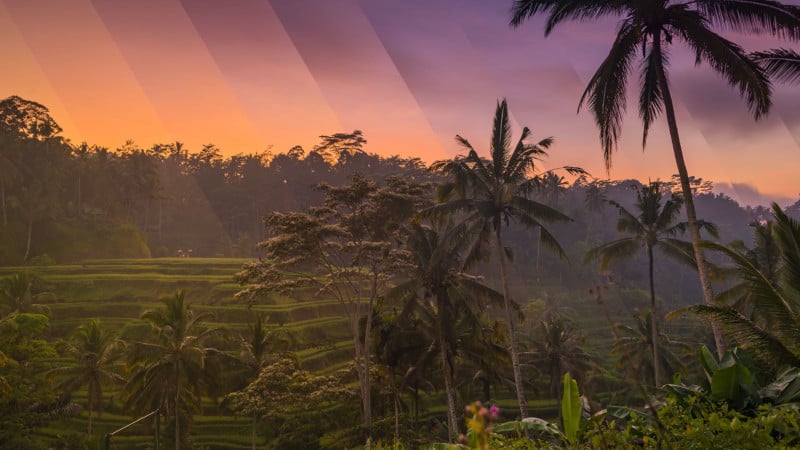 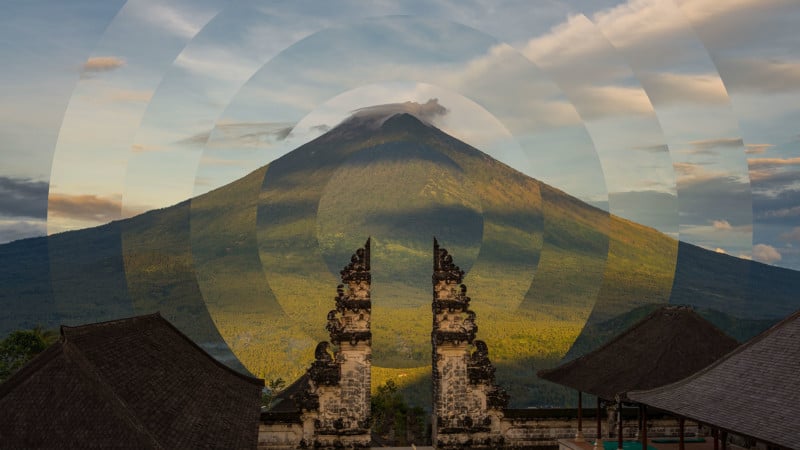 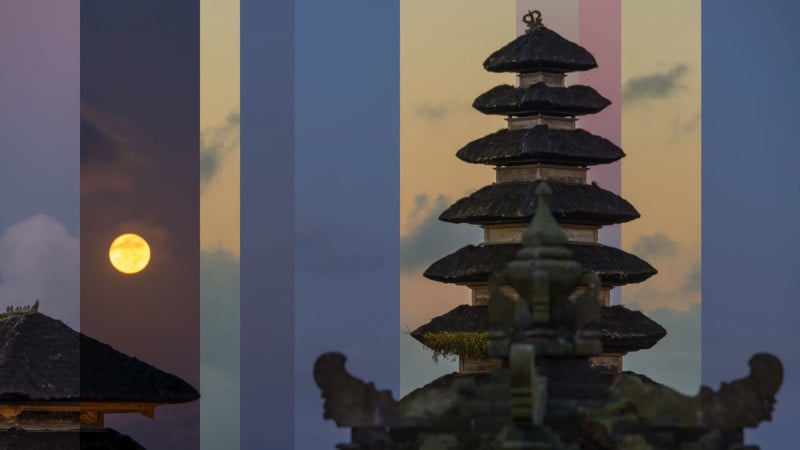 “A breakthrough moment though, was when I realized I could simply copy a mask from Illustrator to After Effects,” he explains. “That opened possibilities for designs, since, as a graphic designer, I’m good at Illustrator, not After Effects.”

To get plenty of footage, Janssen arrived in Bali in March 2020, right before the first lockdown, and had planned to stay for three months as part of a larger trip through Southeast Asia. Instead, he ended up shooting in Bali for 15 months. 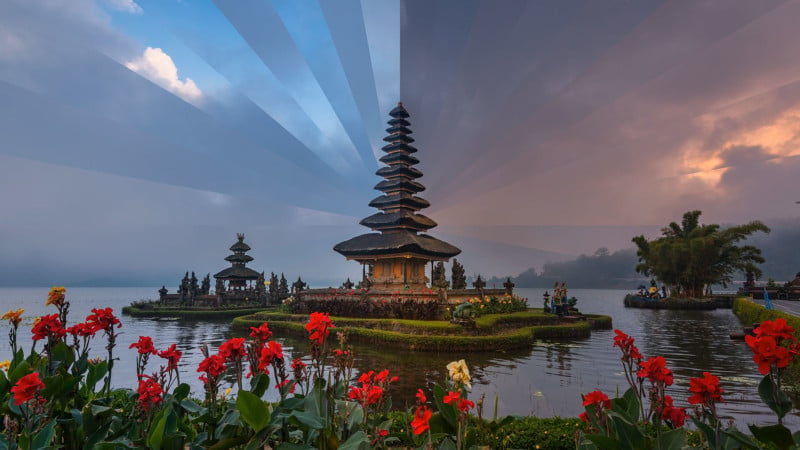 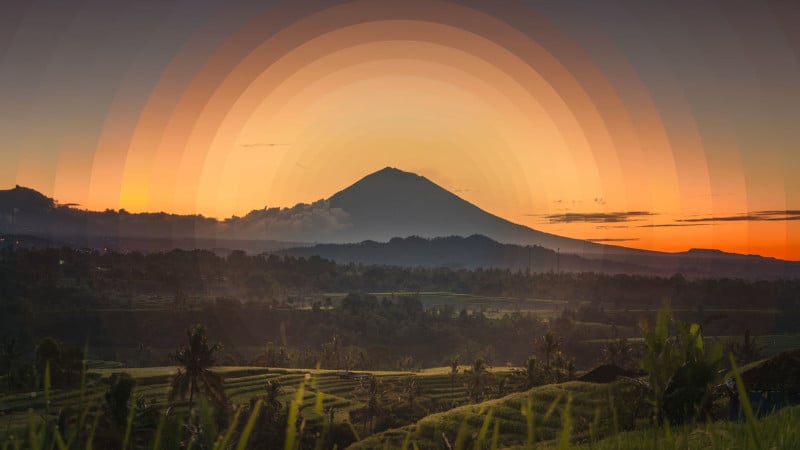 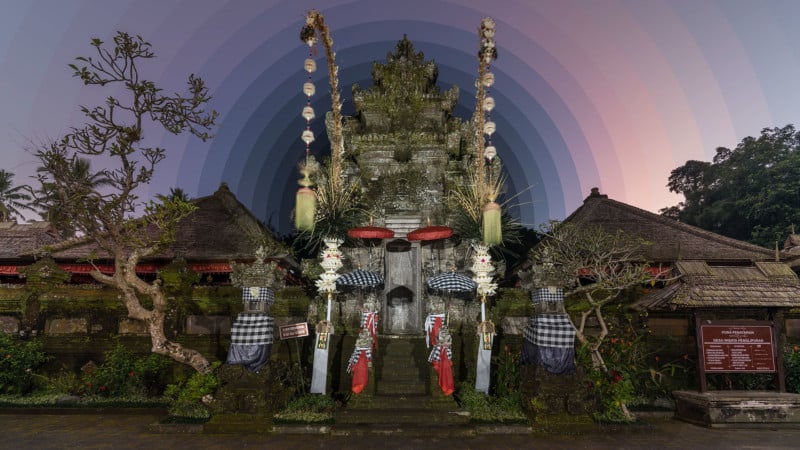 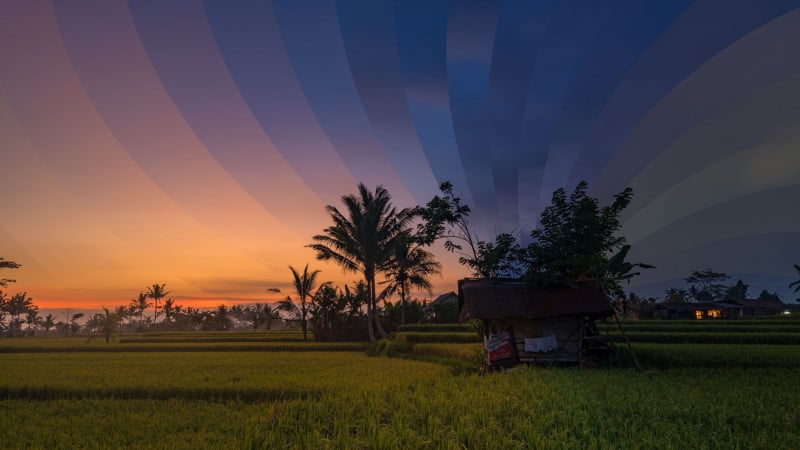 “It proved the right opportunity to capture the required footage for TimeSlice, one of many videos I eventually worked on,” he says. “I already knew Bali well from two previous visits, but this time I explored every corner of it.” 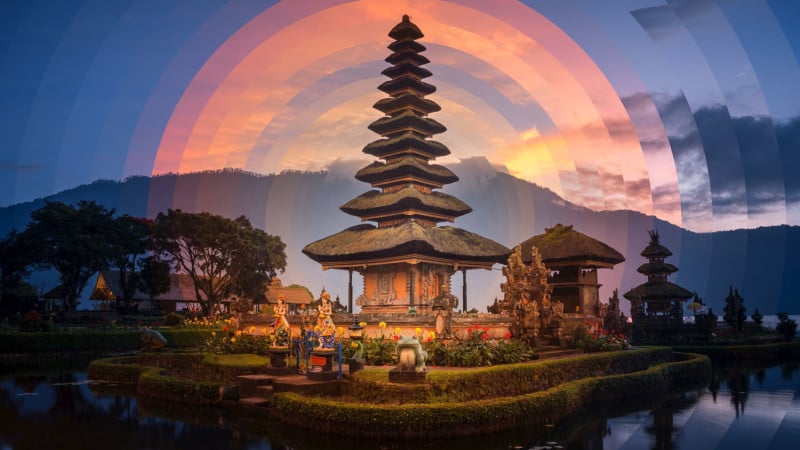 “Almost every scene in the video is a famous or iconic Balinese location, most of which were shot many times over to get the best result,” Janssen adds. “Being in Bali without all the tourists was a unique opportunity, despite much being off-limits.”

Janssen used Maps.me app to mark all shooting locations and color-tagged them for sunrise, sunset, night, or other. He also used it to add notes about the types of possible shots, what times of day and year are best to shoot it, created ratings for the location, and more.

“A lot of research, scouting, and planning went into it all and the app really helps me keep things organized,” he explains. “PhotoPills was used to plan my Milky Way shots, keep track of the sun and moon and all that.” 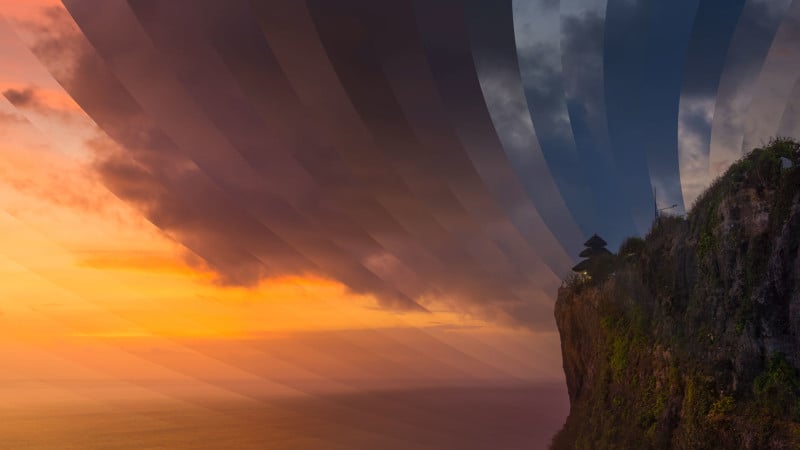 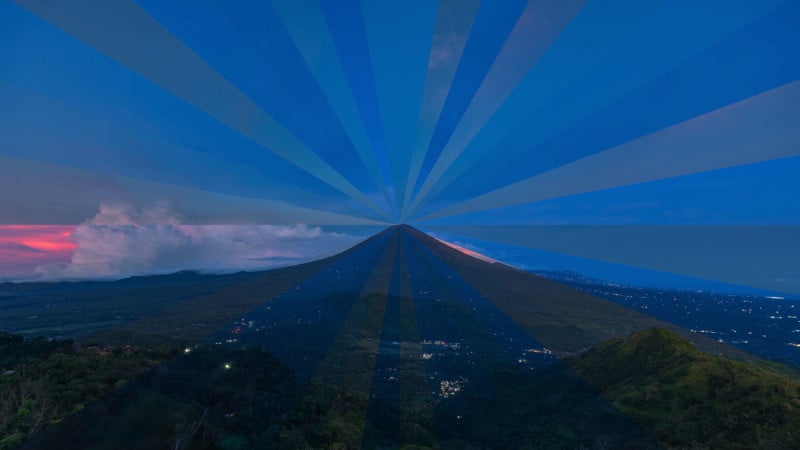 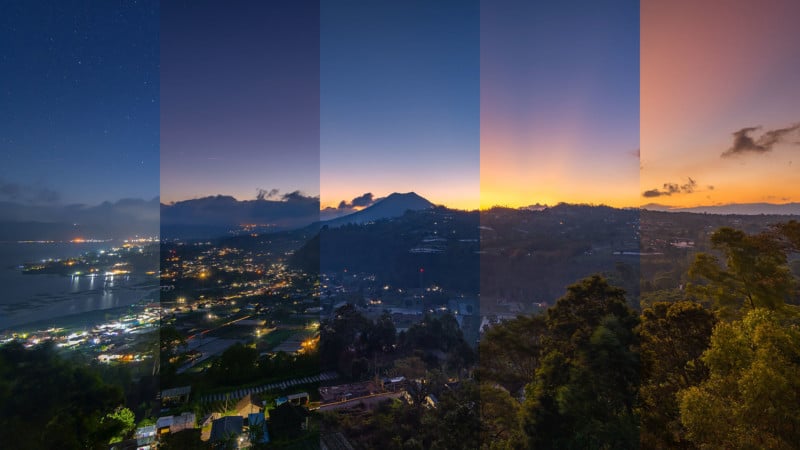 During post-processing, Janssen edited his scenes with Adobe Bridge, Photoshop, Lightroom, and LRTimelapse. When necessary, he also performed frame blending and noise reduction in After Effects.

“Thanks to previous creative experimentation I knew exactly what I needed to do to create the TimeSlice scenes, so that was pretty pre-planned,” Janssen says regarding his process.

“I created many versions to see what worked or not for which designs. After picking the best I started composing the video to the music while constantly adjusting clips to puzzle everything together and make it flow with the music as best as possible.”

The second timelapse method, BlendScape, is also part of larger Janssen’s projects, such as his Bali TimeLapse Quadrilogy, but it goes hand-in-hand with TimeSlice and both belong together as a set.

Janssen explains that they both are the embodiment of his time-warping approaches to timelapse — one blends, the other slices.

“I kind of blend time itself, turning a fraction of time into a blend of 10 minutes, 30 minutes, or even hours of real-time,” he writes about his Bali BlendScape. “You no longer see the moment itself, it’s as if time has melted and no longer makes any sense, does it?”