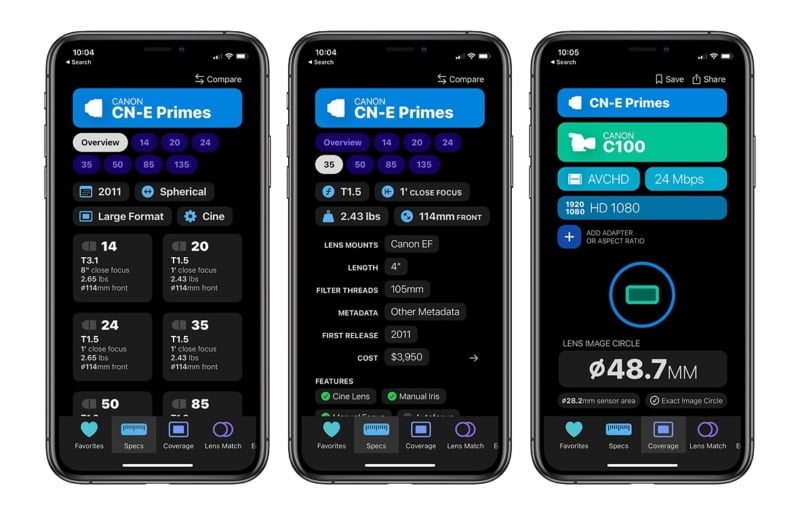 LensKit is a new iOS app that gives photographers the option to try out many different cameras and lenses to see how they work together. It will even help visualize the photograph by displaying a simulation.

Zak Ray, based in New York City, created a new tool that consists of a comprehensive database of adapters, cameras, and lenses that photographers can put together to see what lenses can be used on what camera. The app shows you what an equivalent focal length will be based on the camera’s format.

Ray spoke to PetaPixel and explained that LensKit grew from a need to keep track of the ever-more complex specifications of digital cameras.

“I first started working in filmmaking just after the transition from film to digital. Although film cameras had their own idiosyncrasies, they were far less varied than digital cameras. Overall, they were simpler tools, and there was less to keep in mind,” explains the Vermont native.

Ray says that filmmakers need to know more tech specs on the spot and with new cameras being released every year it can be difficult to keep up with the various sensor sizes, recording formats, and dynamic range.

“In college, I made a spreadsheet that covered the various cameras in my school’s film program. Eventually, it grew to include all the major cameras filmmakers were using, at which point the spreadsheet was getting pretty unwieldy, and it slowly became the CameraKit app.” 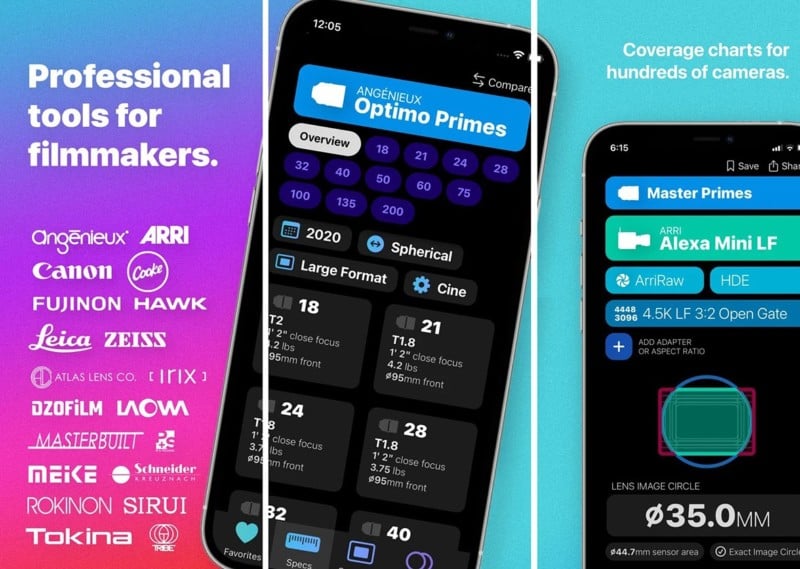 LensKit is a natural extension of the same idea, allowing the user to combine lenses with a camera body to see a field of view or the focal length, something that could come in especially handy for a busy filmmaker.

A Handy Tool for Photographers and Filmmakers

While the app is geared more toward moving stills, Ray says that the tools in LensKit are useful for photographers as well.

“The lens specs I included in this first release are all cinema lenses, but I definitely plan on adding stills lenses in the future, as plenty of filmmakers (myself included) use them often.”

The app consists of lenses from Arri, Canon, Cook, Leica, Zeiss, Irix, Laowa, Panavision, Rokinon, Sirui, Tokina and others, with complete specifications for all of the lenses, with the exception of some missing info from Panavision.

LensKit doesn’t just show the number but uses a clever coverage overlay that displays a lens’s image circle over the selected camera’s sensor to make sure the selected shooting mode is covered.

The app allows photographers to set how far away the camera is from the subject or even provides the Super35 equivalent focal length for what is currently equipped. It even has a depth of field tool.

Ray is a cinematographer and colorist who splits his time 50-50 between freelance work and app development, and he originally made the apps to use himself.

LensKit is free on the Apple App Store but offers in-app purchases to unlock all of its capabilities.