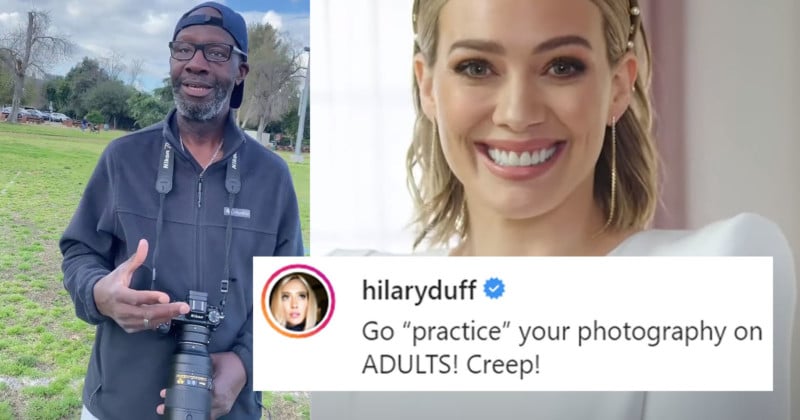 A judge has tossed the defamation portion of a Los Angeles-based photographer’s lawsuit that was based on a run-in with Hillary Duff in 2020 where she posted a video on social media and called him a “creep.”

The initial incident took place in 2020. The photographer, Darryl Wilkins, claims he was taking pictures of children playing football to test out his new camera gear when the actress approached him and asked him to stop.

When the photographer refused, Duff, who was recording her exchange, posted the video on Instagram and called Wilkins a creep and accusing him of stalking minors. The video received over two million views and 200,000 likes, so it wasn’t long before the Wendy Williams talk show picked up the story and the incident received national attention.

In February of last year, Wilkins filed a defamation lawsuit and sought unspecified “general, specific, and punitive damages“ against Fox Broadcasting and Williams’ production company Talk WW Production Inc., claiming that both Duff and Williams used innuendo and their celebrity platforms in a way that damaged his reputation.

Wilkins argues in the lawsuit that Duff made defamatory “false statements because Wilkins is not a pedophile or child predator and was attempting to take photographs as a photographer and not as a paparazzi or stalker or with mal intent or evil wrongdoing.”

This past week, however, the judge disagreed and tentatively dismissed the defamation portion of the case, citing free speech and California’s Strategic Lawsuit Against Public Participation law (SLAPP) which is designed to prevent lawsuits or the threat of lawsuits to intimidate those who are exercising their First Amendment rights.

The dismissal is only a partial victory for Williams and Duff, however, pending a hearing scheduled for September 7. But in his ruling, Los Angeles Superior Court Judge Upinder S. Kalra took issue with the photographer, who did not show up to Friday’s preliminary hearing, and granted the defense’s motion for dismissal after finding the photographer’s excuse for absence “completely lacking.”

“As such, the plaintiff has failed to allege sufficient facts to constitute libel or slander,” Judge Upinder writes.

The judge went on to state that the evidence of the Williams Show segment completely lacked sufficient facts and constituted more opinion than anything else.

It is unclear if the tentative ruling will ultimately clear Duff of using her platform to call Wilkins a creep with the video that she posted. However, Judge Upinder’s ruling does state clearly that Williams and Fox are not guilty of slandering Wilkins with the segment that appeared on her syndicated talk show.

“Whether or not someone’s actions are ‘creepy’ are opinions,” Upinder’s ruling concluded.

Image credits: Hilary Duff portrait in header illustration by VOGUE Taiwan and licensed under CC BY 3.0