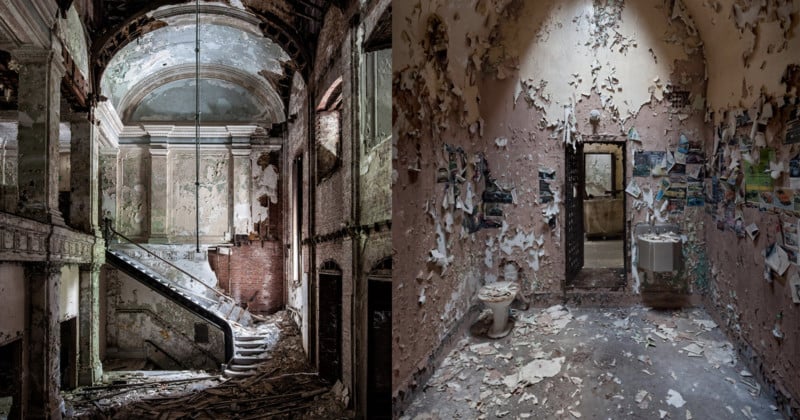 Through exciting but often dangerous urban exploration all around the United States, photographer Matthew Christopher has documented hundreds of sites that now lay forgotten but are forever preserved in his “Abandoned America” project.

Christopher, with a film and media arts degree in hand, struggled to find his entry into professional employment. He finally found a place that offered him a job: a private residential psychiatric facility. Since then, he has been drawn to buildings with complex histories, including those that at times have seen decades-long human suffering inside their walls.

Today, Christopher has visited every type of abandoned site imaginable, including those in other parts of the world: Chernobyl and Prypyat in Ukraine, Romania, India, Georgia, and Greece. Thousands follow his work which is now categorized in sections like prisons, religious sites, schools and research, health care, and many others.

Going back to the roots of his passion to explore and document, Christopher tells PetaPixel he hopes to show others abandoned places and encourage them to view them with respect and consider preservation.

“We have a tendency to see only certain places as important and historically or culturally significant, and if they don’t meet the almost impossibly high bar we set, they are left to rot as soon as they are no longer immediately useful to us,” he says.

“We lose so much of our architectural heritage every year and with it the opportunity to explore otherwise undocumented or underreported aspects of our culture and past.”

A Dangerous But Rewarding Experience

To visit any abandoned site is a dangerous mission — photographers can find themselves walking on bad floors or standing under weak ceilings. Christopher points out that these unused buildings “can also have environmental contaminants like asbestos, lead paint, PCBs, and other chemicals.”

“While I try to be careful when I’m photographing these places, really the only truly safe thing to do is not to go in them,” he adds. “While things like respirators and hard hats do help mitigate some of the dangers, nothing is really able to protect you from falling through a floor.”

When Christopher is visiting a site, he looks for ways to connect, at least on some level, with what he’s photographing. Seeking out aspects of a place that tell a story about the people who once were there or what makes the site “magical and significant” contribute to a making better photograph. At the same time, he makes sure to be a considerate visitor and leaves the place as it was before he arrived.

“I’m trying to honor what it was and what it now is,” Christopher explains.

The Future of “Abandoned America”

Christopher is now in the middle of a major move and has launched a few projects, which all have taken precedence over planning his trips to abandoned sites. But, even if he did have a place in mind, it takes a lot of planning to gain access first and foremost. If someone gets in touch with access to a place, he tries to be as fast as he can because it may be gone shortly after.

He has hundreds, if not thousands, of places on his wish list for the future, and it only continues to grow.

“The list is always longer than my time and finances allow — but before the pandemic, I had already started traveling abroad to photograph some of the most impressive and historic ruins across the world, and I’d very much like to continue that in addition to chronicling ruins across the United States,” he adds.

While he’s not traveling to unexplored locations, Christopher works on books. He has two out already and is currently working on a third. He shares his knowledge and experiences with the audience on the “Abandoned America” podcast where he answers common questions from those fascinated with his work and the forgotten buildings. Christopher also has an exhibit, opening at the Canton Museum of Art in Canton, Ohio, from April 26 through to July 24.