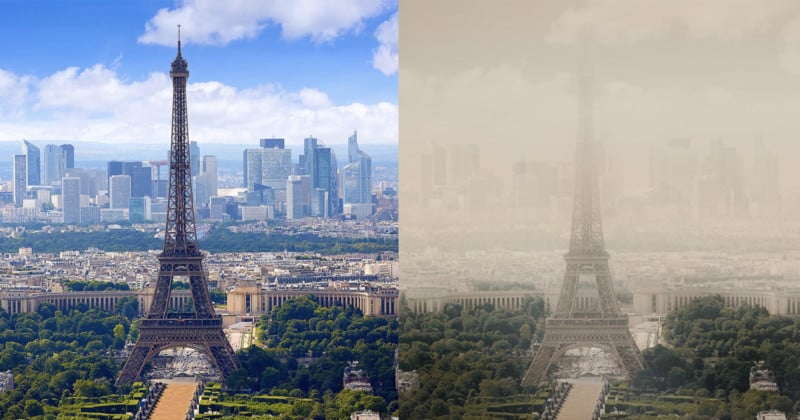 Despite years of campaigning and government efforts, air pollution is still on the rise around the world. A new series of eye-opening before-and-after photos imagine what iconic photography locations in different countries would look like if pollution levels rise unchecked.

The Hidden Threats of Air Pollution

For most people, the gradual rise in air pollution may not be immediately obvious in their daily lives. But, traveling to a popular tourist spot, like the Rockefeller Center in New York City, and seeing the view of the city skyline almost completely obscured in smog wouldn’t go unnoticed.

Even though air pollution is still high on the global agenda, there are still regions that are greatly exposed to increasing levels of it, like Central and Southern Asia and Sub-Saharan Africa. According to a 2020 study, researchers found that air pollution is a threat to both public health and economic progress, causing as many as 4.2 million deaths annually.

To draw attention to the quality of the air the public breathes, designers at HouseFresh created comparison photos imagining what beautiful and popular city views around the world would look like if unchecked air pollution reached extreme levels.

The “Photoshopped” pollution photos are based on the visual effect that air pollution currently has on the skyline of Ghaziabad, India.

Ghaziabad is consistently ranked among the world’s most polluted cities, and the air quality index (AQI) has been known to reach 400 or 500, blanketing the city of 1.7 million people in a thick layer of brown smog.

The real-time values update constantly but to put it in perspective, the current AQI in New York ranges between 27 and 67. Even though the value is significantly lower, the Department of Environmental Protection reports that New York City air pollution contributes to 6% of annual deaths, with fine particulate matter (PM2.5) as the main cause of fatalities.

PM2.5 consists of small, airborne particles that “can penetrate deep into the lungs, causing inflammation of the airways, exacerbating lung and heart disease, increasing hospital admissions and contributing to premature mortality.” In Ghaziabad, it is 18.2 times the annual air quality guideline value as set by World Health Organization (WHO).

WHO suggests that the majority of deaths related to PM2.5 could be avoided if pollution levels drop to levels proposed in the organization’s guidelines.