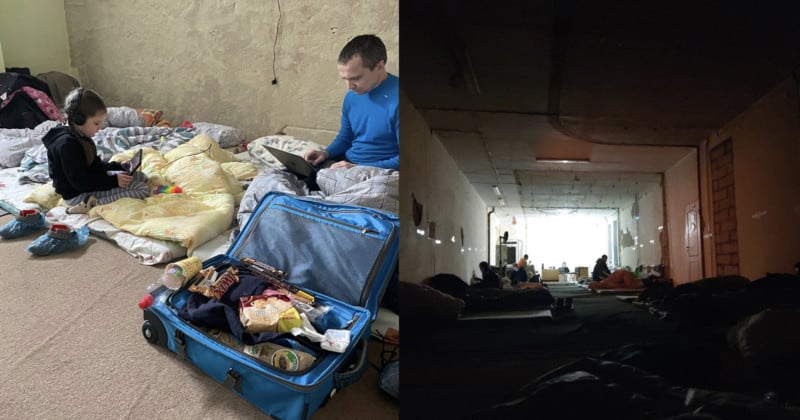 Skylum, like any company based in Ukraine, has seen the lives of its employees uprooted since the Russian invasion. The company has shared some of the personal stories of how those who are behind its imaging software have been personally affected.

Last month, Skylum — which has its main development center in Kyiv, Ukraine — shared the realities of working and maintaining operations while the whole country is entrenched in a war. With 130 staff members working from different parts of Ukraine and around the world, the company explained the challenges of maintaining normal business operations while most of the team works from bomb shelters or in constantly changing environments.

As the war enters its 41st day, many of Skylum’s employees have relocated and taken on alternative duties — like helping others find new homes and rescuing abandoned animals — alongside their ongoing commitment to the photo editing company.

Relocated but Not By Choice

Marketing Manager Sabina Iliasova now lives with in-laws in a small town in the Zhytomyr region after she helped friends evacuate and was unable to return to Kyiv due to unsafe road conditions. While her husband is enlisted in the army, Iliasova runs a drone donation initiative while continuing to work for Skylum as an affiliate marketing manager.

“I’m not planning to leave the country, as I understand how important a cup of coffee that I buy in Berdychiv is for local business,” she says. “And after all, I’m at home and my home needs my help right now.”

One Morning That Changed Their Lives

Olya Zabirnaya, Skylum’s Email Marketing Manager, was on a vacation in the western part of Ukraine when she was woken up by a text message about war breaking out. Her life was instantly thrown into turmoil and eventually, she found herself and her boyfriend with his mother in the Zhytomyr region, safe but separated from her own parents.

“We received five more refugees from Zhytomyr in our apartment,” Zabirnaya says. “Imagine eight people sleeping in the same corridor. Every time the sirens sound, you pull your head into your shoulders, as if it would help. And to the point of trembling in the knees, you are afraid of a rocket that’s now flying somewhere.”

Similarly, Yaroslav Kapliy, an Advertising Lead for the company, was first woken up by a phone call from his father, telling him Putin is bombing the country. Frazzled by the news, he didn’t want to believe it at first but soon gathered the necessary belongings to drive to the still unfinished family’s house outside Kyiv. Now, he shares the space with his wife, cousin, and her husband, and takes cover in the basement garage during air raids.

Maryna Ponomaryova, a Copywriter, had great plans for her future including a vacation to Sri Lanka. She also was scheduled to start pre-orders for her book. The war put everything on hold and she was even forced to spend a night in a cold metro station that served as a bomb shelter.

Ponomaryova has managed to convince her parents to leave the capital and with them on what she describes as a nightmarish journey en route to a safe place to escape the conflict. She eventually found accommodations in Lviv, but undoubtedly the war has completely changed her life.

“War has wiped everything away,” she explains. “I can’t read, I can’t listen to music, I can’t be happy about the things that used to make me happy, I don’t know when I’ll see my friends, I can’t make plans, because no one knows when this will end. I’m grateful to have my work at Skylum that keeps me distracted from the constant stream of news.”

Despite Everything, Business Continues

Andrey Frolov, an R&D Tech Lead, has been with Skylum since its inception and has been responsible for developing some of its more famous technologies such as the Sky Replacement feature. Now, Frolov works on the kitchen table in a rented apartment and is grateful that he can continue working remotely during times when many have lost their jobs.

“We took the bare minimum of luggage, and in the morning we rode into the unknown, in the direction of Lviv,” he recalls.

Skylum colleague Valeria helped his family find a place to stay in Lutsk, near the Belarussian border.

“Here it’s also restless, and sirens are going off at all hours of the day and night. But it’s not the same as being in Kyiv, close to the Russian invaders.”

Working at Skylum and Volunteering to Assist the Country

Some, like Leona Vasylenko, Marketplace and E-commerce Manager, have taken on additional duties during the war. While still managing the Luminar Marketplace, Vasylenko also volunteers and helps refugees find a safe place to live, supervises large-scale food supplies to war zones, and keeps track of evacuation routes for those arriving in Lviv from war hotspots.

“I live in a house with friends in Lviv,” she says. “There are nine of us here, and we all volunteer in different ways, from transporting large batches of insulin from Vienna to Kyiv to hosting refugees on the floor of our house for the night.”

These are just a few stories of those impacted by the war. Skylum has shared insights into the lives of many others, with its team members’ stories collated in a blog post.

Despite the difficult circumstances, the Skylum team still managed to release a new update for Luminar Neo (its second since the war started) and Luminar AI.