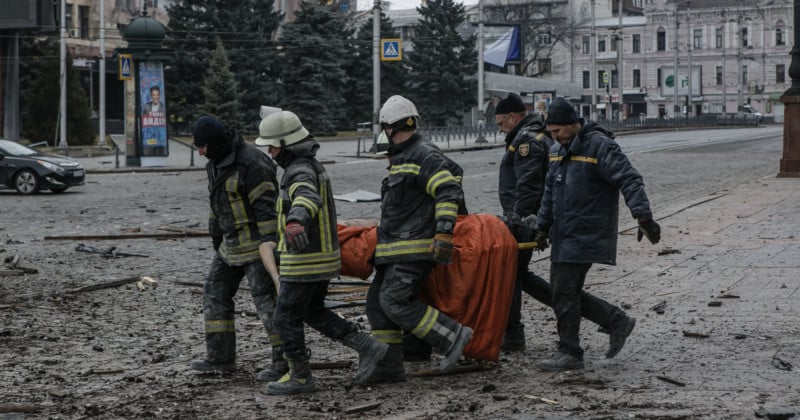 Since the start of Russia’s invasion of Ukraine, nary a day goes by without the press publishing distressing war images, from slightly upsetting to the downright graphic. But, how do newsrooms decide on which war photos will get to see the front page and which ones will be shelved?

As the war in Ukraine remains ongoing, the news outlets are filled with unsettling photographs taken by photojournalists on the ground. They cover the carnage of war in its entirety — from the damage caused to buildings and infrastructure, crowds fleeing, first responders rescuing injured citizens, people and pets hiding underground, to even graphic photos of dead victims and soldiers.

However, it’s rare that the most disturbing scenes get published on the front pages of major publications. But, when they do, they have the power to stop the audience in its tracks and shake it to its core. Such was the case of modern war and conflict consequences captured in Greece, Syria, Mexico, and elsewhere.

Visual evidence of human suffering can have a powerful effect on the audience watching the war unfold from the sidelines, with the war in Ukraine being no exception. The war has seen thousands of photos taken by civilians and even the Ukrainian government in addition to those shot by professional photojournalists, depicting “the indiscriminate effect of Russian munitions on civilians,” as described by The Washington Post.

How journalists decide which images from Ukraine are too awful to publish https://t.co/l4v9bKuDIR

Although civilians are free to share what they see around them, newsrooms have ethical and professional deliberations when considering what gets published for the world to see. Such was the case in a recently published photo by American photojournalist Lynsey Addario, who captured a horrific scene of a Ukrainian mother and her two children who were deliberately killed while fleeing from Irpin to Kyiv, Ukraine’s capital.

When capturing scenes like this, there are no guarantees that the resulting images will see the light of day, particularly if they depict such sensitive material that can cause distress to readers and victims’ families. But, The New York Times’s photo editors decided to publish Addario’s photo because “exposing the war’s brutality outweighed decorum.” The harrowing image ran on the front page of the Times’s website and its print newspaper.

“The image was so exceptionally graphic that the conversation was elevated to a high level [among editors] fairly quickly,” says Meaghan Looram, the newspaper’s director of photography. “But the sentiment was universal. This was a photograph that the world needed to see to understand what is happening on the ground in Ukraine.”

Looram adds that it was “necessary” to photograph the horror of deliberately targeted civilians who were trying to escape using a known evacuation route.

“I think it’s really important that people around the world see these images,” Addario adds to the sentiment. “It’s really brave of the New York Times to put that image on the front page. It’s a difficult image, but it is a historically important image.”

It’s challenging for photo editors to decide which images will be shown to the audience and a fine line to walk for photojournalists, too. The Washington Post reports that graphic images can trigger complaints about exploitation or needlessness. On the other hand, some criticize news outlets for not properly showing the war’s true effect has on people, such as in the case of rarely published photos of American soldiers killed in combat.

In regard to Addario’s photo, editors had “an extensive discussion” on how best to display the image and if they should add a warning to readers about the sensitivity of the material. They added a disclaimer on social media platforms but decided against doing it on the publication’s website or in print, where readers generally make a conscious decision to seek news.

Before digital publications, photo editors would use the “breakfast-table test,” in which they’d ask themselves if a reader would be upset when opening a newspaper over breakfast. However, this method has gradually disappeared due to “gradually desensitized viewers,” explains MaryAnne Golon, The Washington Post’s director of photography.

Most news outlets tend not to publish photos that show victims’ faces or gore, however, Addario’s photo was an exception to the rule this time. Similarly, Washington Post shared a photo of a pregnant mother being carried out of a hospital struck by an airstrike, captured by the Associated Press photographer Evgeniy Maloletka. Later, it was reported that the woman and her baby died due to the injuries sustained.

Although images like these are undoubtedly upsetting to many, Looram noted that many New York Times readers thanked the newspaper for showcasing Addario’s photo so prominently, with some “grieving the loss of this family and so much more suffering, and praising Lynsey’s courageous work.”