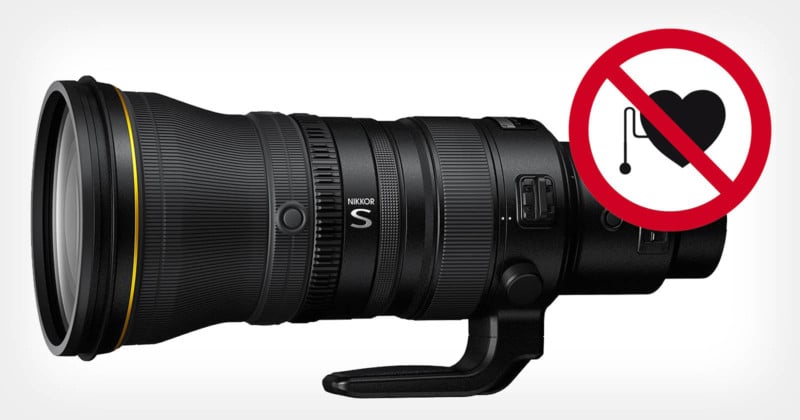 Nikon’s new $14,000 400mm f/2.8 TC VR S lens for mirrorless cameras has been getting terrific reviews, but there is another more unusual reason the lens stands out in Nikon’s lineup: Nikon warns that you should not use it if you have a pacemaker or any other kind of medical device.


The official reference manual for the lens contains this warning (first spotted by Nikon Rumors): “Do not use this product if you have a pacemaker or other medical device. The magnet or magnets in this product could cause medical devices to malfunction.”

The reason for the warning is the newly-unveiled autofocus drive system in the lens that Nikon has named Silky Swift Voice Coil Motor (SSVCM).

The magnets, however, are so powerful that they could interfere with pacemakers and other medical devices, which could potentially be fatal to the person the device is implanted in or used by. The risk is apparently so great that Nikon is not taking any chances, warning anyone with any medical device to simply not use lenses with this autofocus system (which is currently just the 400mm f/2.8 TC VR S lens).

How Magnets Interfere with Medical Devices

“Magnetic fields in magnets in devices and machinery can inhibit pulse generators for ICDs and pacemakers,” writes the American Heart Association. “[…] If you have an ICD or pacemaker, avoid close or prolonged contact with magnets or their magnetic fields. Keep magnets at least six inches from where your device is implanted.”

Because cameras are often held close to the chest, it could be difficult for photographers to make sure a particular lens is always at a safe distance from their medical device at all times.

Apple has a page that lists all of its products that contain magnets. The company does not state that those with medical devices should not use the products (which include the AirPods, Apple Watch, iPad, iPhone, and MacBook), it does state that all the products should be kept at least 6 inches (15cm) away from medical devices or 12 inches (30cm) when wirelessly charging.

A Warning from the FDA

The U.S. Food and Drug Administration released a brief in May 2021 stating that it has conducted its own testing and is continuing to monitor the effects of magnets in newer consumer electronics on implanted medical devices.

“[The FDA] reviewed recently published articles describing the possibility that certain newer cell phones, smartwatches and other consumer electronics with high field strength magnets may temporarily affect the normal operation of implanted electronic medical devices, such as pacemakers and implantable defibrillators,” says Jeff Shuren, M.D., J.D., director of the FDA’s Center for Devices and Radiological Health. “[…] We believe the risk to patients is low and the agency is not aware of any adverse events associated with this issue at this time. However, the number of consumer electronics with strong magnets is expected to increase over time.

“Therefore, we recommend people with implanted medical devices talk with their health care provider to ensure they understand this potential risk and the proper techniques for safe use.”

The FDA notes that some newer consumer products — including the Nikon 400mm f/2.8 TC VR S lens camera lens, it seems — contain magnets powerful enough to place medical devices into their “magnet mode,” which is a safety feature that is designed to be used only during certain medical procedures (such as MRI scans). This safety mode is not intended to be activated in daily life and can interfere with the device’s normal operations until the magnet is moved away.