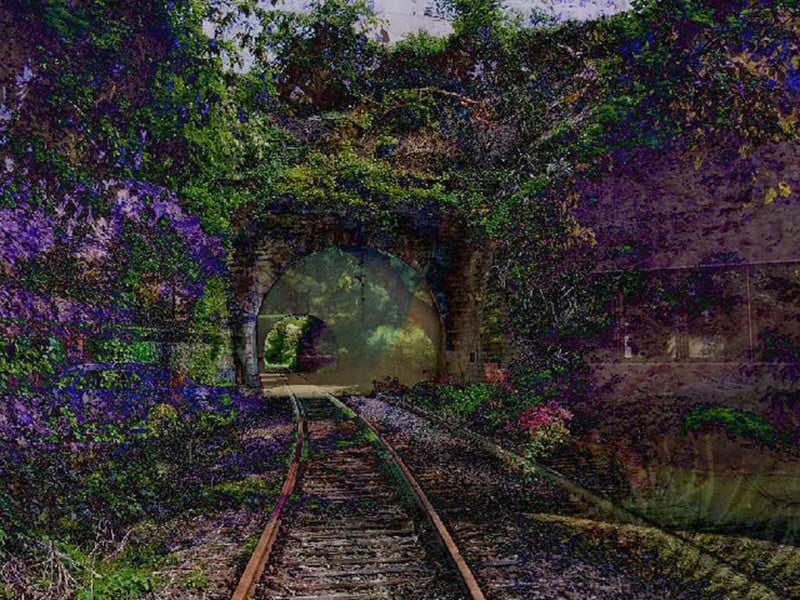 Artificial intelligence has gotten better and better at creating “art” in recent years — algorithms are now capable of creating convincing “photos” of people and places that do not actually exist. It turns out those AI artworks cannot be copyrighted in the United States with the US Copyright Office.


A new decision issued by the Copyright Office last week rejected a request to copyright an AI-generated artwork.

AI-Generated “Visions of a Dying Brain”

A three-person board was tasked with reviewing a 2019 ruling that had been made against a man named Steven Thaler, who had filed for the copyright to an art piece, seen above, titled A Recent Entrance to Paradise that had been made by an AI algorithm he named Creativity Machine.

The artwork had been created as part of a series in which the AI reprocessed pictures into views of a “simulated near-death experience.” Thaler had received a patent in 1997 for a process of generating fictional “visions of a dying brain.”

The algorithm “generated fictional experience from various reversible noise and irreversible damage effects within neural-network-based brain simulations,” writes Urbasm. “Rather than show a neural net pictures (as a big search engine company has) and allow it to replace items in the scene with weird objects deliberately planted by software engineers (i.e., dog heads and pagodas), these systems are exposed to their surroundings, ‘blindfolded,’ and allowed to choose from the myriad self-generated fantasies it finds most interesting.”

Thaler originally applied to copyright A Recent Entrance to Paradise on November 3rd, 2018, listing the author of the work as “Creativity Machine” and listing himself as the claimant, arguing that the copyright should be transferred from the AI to him because of his “ownership of the machine.”

The application stated that the work “was autonomously created by a computer algorithm running on a machine” and that Thaler was “seeking to register this computer-generated work as a work-for-hire to the owner of the Creativity Machine.”

A Back-and-Forth with the Copyright Office

On August 12th, 2019, the US Copyright Office rejected his registration, stating that it “lacks the human authorship necessary to support a copyright claim.”

The following month, Thaler appealed and asked the Copyright Office to reconsider the rejected application, arguing that “the human authorship requirement is unconstitutional and unsupported by either statute or case law.”

In March 2020, the Office rejected the appeal, stating that Thaler had “provided no evidence on sufficient creative input or intervention by a human author in the Work” and that it would not “abandon its longstanding interpretation of the Copyright Act, Supreme Court, and lower court judicial precedent that a work meets the legal and formal requirements of copyright protection only if it is created by a human author.”

Thaler then appealed a second time on May 27, 2020, repeating his position that AI artworks should be copyrightable because it would “further the underlying goals of copyright law, including the constitutional rationale for copyright protection.” The second appeal argued that “there is no binding authority that prohibits copyright for [computer-generated works]” and that the Office was “currently relying upon non-binding judicial opinions from the Gilded Age to answer the question of whether [computer-generated works] can be protected.”

Only Human Creators Can Copyright in the US

In considering Thaler’s second appeal, because Thaler admitted that there was no human author involved in the work, the Copyright Office focused on Thaler’s argument that the requirement for human authorship is unconstitutional and unsupported by prior rulings.

“The Court has continued to articulate the nexus between the human mind and creative expression as a prerequisite for copyright protection,” the Office writes. “The Office is compelled to follow Supreme Court precedent, which makes human authorship an essential element of copyright protection.

“[…] While the Board is not aware of a United States court that has considered whether artificial intelligence can be the author for copyright purposes, the courts have been consistent in finding that non-human expression is ineligible for copyright protection.

“[…] After reviewing the statutory text, judicial precedent, and longstanding Copyright Office practice, the Board again concludes that human authorship is a prerequisite to copyright protection in the United States and that the Work therefore cannot be registered.”

A similar copyright discussion made headlines a decade ago after a monkey grabbed photographer David Slater’s camera and shot a series of viral self-portraits. The animal rights group PETA sued the photographer in 2015 on behalf of the monkey to have copyright assigned to the animal. Slater settled with PETA in 2017, agreeing to donate 25% of future proceeds from the photos to charity, but a court ruled against PETA in 2018, establishing the precedent that only humans, not animals, can register for copyright and file copyright lawsuits.

The Future of Copyright for AI-Created Works

The Verge, which first spotted the latest Copyright Office decision, notes that the door has not been closed for humans to receive the copyright of works created by AI — they may just have to take a different approach that causes the Copyright Office to see them as a crucial part of the creation process.

“Thaler emphasized that humans weren’t meaningfully involved because his goal was to prove that machine-created works could receive protection, not simply to stop people from infringing on the picture,” The Verge writes. “The board’s reasoning takes his explanation for granted. So if someone tried to copyright a similar work by arguing it was a product of their own creativity executed by a machine, the outcome might look different.”

Thaler could also turn from the Copyright Office to the courts by filing a lawsuit to see if a judge might come to a different conclusion than the copyright board.

As artificial intelligence technologies continue to play a bigger and bigger role in photography and all kinds of creative fields, the intersection of AI and copyright will undoubtedly continue to show up in legal battles and headlines in the coming years.