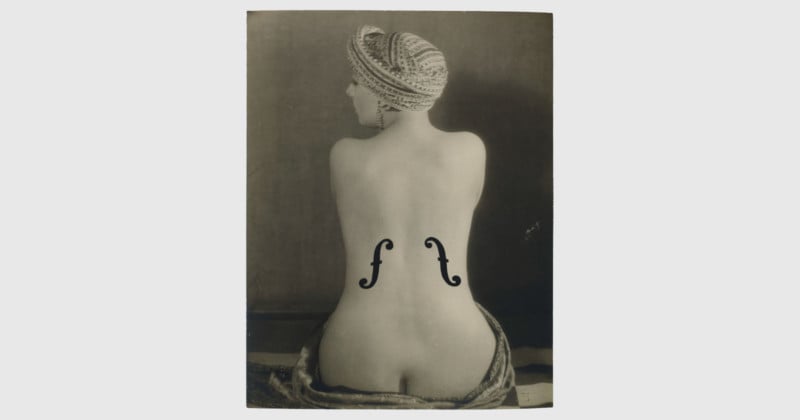 An iconic photo of a nude woman by artist and photographer Man Ray is poised to become the most expensive photo in the world. It will be auctioned by Christie’s with an asking price of at least $5 million, a new recording asking price in the history of photo auctions.


The photograph that is heading to the auction block is Le Violon d’Ingres (French for “Ingres’s Violin”), a black-and-white image created by American artist Man Ray back in 1924. The portrait shows a nude woman with markings shaped like violin f-holes on her back, and it is widely considered to be the legendary artist’s most famous work and a seminal art piece of surrealist photography.

As Wall Street Journal first reported, Christie’s has set the estimated price of the work at between $5 million and $7 million, the highest ever for the British auction house and a new high mark in the world of photography.

Born in 1890 as Emmanuel Radnitzky but known in his adult and professional life as Man Ray, Ray was a pioneering American fashion and portrait photographer who created iconic nude and surreal photos while living in New York and Paris. He was also known for his cameraless photograms, which he dubbed “rayographs.”

It was in Paris that Ray photographed his lover and companion, Alice Prin (known as Kiki de Montparnasse), who went on to become one of the most famous models of the 20th century.

Inspired by the painting La Grande Baigneuse by Jean Auguste Dominique Ingres, Ray painted violin sound holes on Prin’s back to transform her body into a musical instrument and photographed her nude wearing a turban.

The f-holes were actually not painted onto Prin’s back in real life, but rather on a print of the portrait Ray captured. Ray then rephotographed the classical nude portrait to create the finished surreal work.

The title of the photo, Le Violon d’Ingres, pays homage to the fact that Ingres was a passionate violin musician when he was not painting. His secondary interest became so well known that it begot the common French expression “violon d’Ingres,” which means a secondary hobby, passion, or skill apart from the one an individual is known for.

The title may also be a reference by Ray to the fact that Prin is his personal “violon d’Ingres.”

“The transformation of Kiki’s body into a musical instrument with the crude addition of a few brushstrokes makes this a humorous image, but her armless form is also disturbing to contemplate,” the Getty Museum writes. “The title seems to suggest that, while playing the violin was Ingres’s hobby, toying with Kiki was a pastime of Man Ray. The picture maintains a tension between objectification and appreciation of the female form.”

Le Violon d’Ingres was first published in a special June 1924 issue of Littérature, a struggling surrealist magazine that was launched in 1919 and shuttered after the final issue that Man Ray’s photo appeared in.

In the century since the publication of Le Violon d’Ingres, the photo has become one of the most recognizable works of surrealist art, and sound hole.

The Title of Most Expensive Photo in the World

Whether or not Le Violon d’Ingres will in fact set a new record depends on whether there is someone willing to pay for what Darius Himes, international head of photographs at Christie’s, calls “one of the most iconic works of the 20th century.”

“This beguiling Surrealist image is the result of a unique and hand-manipulated darkroom process,” Himes says in a statement. The reach and influence of the image, at once romantic, mysterious, roguish, and playful, has captured the minds of all for nearly 100 years.

“As a photographic work, it is unprecedented in the marketplace. We are proud to handle it.”

The photo comes from the collection of the late Rosalind Gersten Jacobs and Melvin Jacobs, retail executives (the CEO of Saks Fifth Avenue and VP of Macy’s, respectively) who developed a love of art collecting and surrealist works. The Jacobs purchased the print directly from Ray in 1962, according to Christie’s. It’s a print that is considered by experts to be an original photographic copy, created around when Ray captured the photo negative.

If Christie’s manages to find a buyer for the photo at the asking price or higher, Le Violon d’Ingres will become the world’s most valuable single photo, shattering the price of $4,338,500 that was paid for photographer Andreas Gursky’s Rhein II in a Christie’s auction on November 8, 2011.

American photographer Peter Lik announced that he had sold a work titled Phantom for $6.5 million back in 2014, but that sale has never been proven and a buyer has never come forward, so Rhein II remains the most expensive photo with a verified sale price.

Le Violon d’Ingres will be offered in a live auction dedicated to the Jacobs’ collection of surrealist art at Christie’s in New York in May 2022.