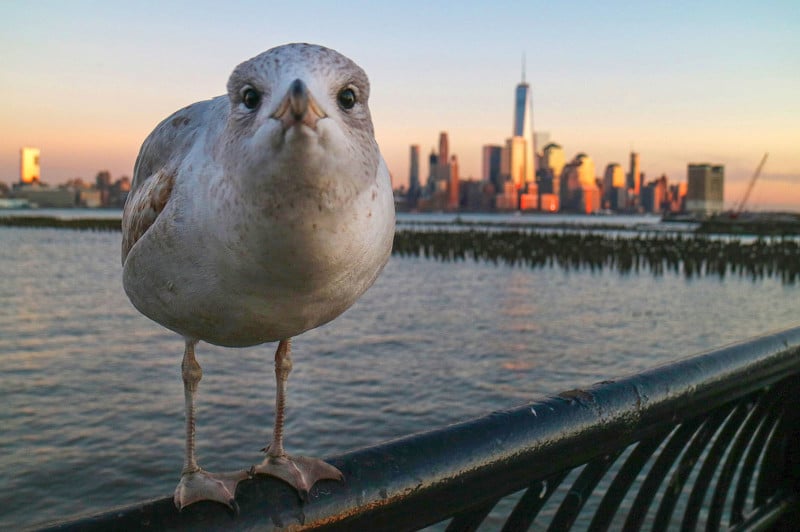 New York City-based photojournalist Gary Hershorn captured this lighthearted portrait of a seagull looking directly at his lens with Lower Manhattan and One World Trade Center as the backdrop.


Hershorn enjoys walking along the Hudson River in Hoboken and Jersey City, New Jersey, photographing the seagulls while using the New York City skyline as a backdrop.

“It is always fun to find a bird that simply is not afraid of a human being and just stands there posing and probably wondering what the heck the photographer is doing,” says Hershorn.

Photographing Seagulls with a Wide-Angle Lens

Hershorn likes to photograph the birds at sunrise and sunset, the latter of which being when this image was taken. It was captured with a 24-megapixel, APS-C Canon EOS M3 mirrorless camera with a wide-angle lens. The quiet shutter was helpful in not scaring the seagull from this close distance.

“Playing with perspective is also one of the fun things I like to do when shooting along the river, making the birds bigger than the buildings behind them,” says the photographer. “Big bird, small buildings make me laugh.”

This particular photo was captured in January 2016 in Hoboken, New Jersey, although the photographer/photo editor has shot many images just like this over the years. The seagulls hang out on the wooden poles in the water (from old piers that have long disappeared) that you can see behind this bird. They leave in the morning at sunrise but come back to their overnight home just as the sun is setting.

“I always wonder where they spend their day as they equally head north and south along the river,” says Hershorn, who is always full of curiosity. “In certain parts of the year, the setting sun illuminates the white birds in the same orange light you see on the buildings across the NYC skyline as the sun sets, but that time window is shrinking as more buildings are built along the New Jersey side of the river blocking the sun from hitting them.”

From 1985 to April 2014, Hershorn was a photographer, editor, and manager for the Reuters News Agency, where he traveled extensively for covering Olympic Games (the Rio 2016 Olympics was his 17th Olympics), soccer World Cups, Super Bowls, golf, tennis championships, the Academy Awards, and elections.

Image credit: A seagull stands on a railing across from Lower Manhattan and One World Trade Center in New York, January 27, 2016. Photograph by Gary Hershorn.