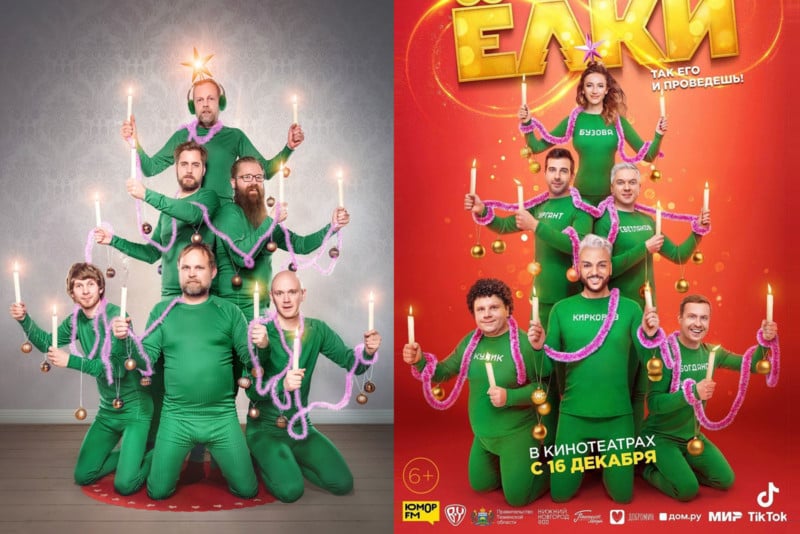 Back in 2015, Norwegian photographer Stig Håvard Dirdal captured a creative Christmas photo that went viral online. He was recently surprised when he came across a poster for a Russian movie that looked a little too familiar.

Dirdal is a photographer who is known for his creative, playful, and unconventional images that often mix photography, illustration, montages, and 3D. He established his creative advertising photography business in 2006 and has since won a number of domestic and international photography awards.

In 2015, the Norwegian camera store Stavanger Foto hired Dirdal to shoot a creative “human Christmas tree” photo featuring the store’s employees. The photo, which was turned into the store’s official Christmas card, was a hit among customers and was widely shared on the Web.

Due to extensive misuse of his photo, Dirdal registered the copyright for the photo with the U.S. Copyright Office in 2018.

Read also: How to Register Your Photo Copyrights in the United States

“I have been contacted every year by companies from all over who want to use my idea for their Christmas greetings,” Dirdal tells PetaPixel. “I am not into re-using original ideas, so I have told everyone no.”

In the United States, at least, photographers can copyright a photo but not the idea of the photo.

“In the US one cannot copyright an idea,” NPPA General Counsel Mickey Osterreicher tells PetaPixel. “Even replicating (not actually copying it) a photo is also permitted.”

Osterreicher notes that a famous example of this was the lawsuit photographer Jacobus Rentmeester filed against Nike after the athletic apparel company created a similar photo of basketball superstar Michael Jordan dunking and then turned the silhouette into its iconic Jumpman logo.

A federal court ended up dismissing Rentmeester’s copyright infringement lawsuit, and the US Supreme Court subsequently denied Rentmeester’s request for a hearing.

A Human Christmas Tree in a Russian Movie Poster

December 2021 saw the release of a Russian Christmas movie titled Yolki 8 (or “Christmas Trees 8”), and the film was promoted and shown in Russia, Europe, and North America.

Yolki is a comedy film franchise that started with the original Yolki film back in 2010. The 8 films in the series so far are now the most successful non-animated film franchise in Russian history, generating many tens of millions of dollars.

While there have been many photographs inspired by Dirdal’s viral Christmas photo, the photographer was taken aback when he saw the movie’s official poster and how closely it copied his original work.

“I have seen lots of [human] Christmas trees and re-makes of my human Christmas card from 2015, but none as good as the one for ‘Yolki 8’,” Dirdal says. “Is it okay to take or steal ideas or concepts? This idea has already [been] proven to get massive attention since 2015 when it went viral. The answer is surely NO. It is not okay to steal, and it is not ok to steal ideas or great ideas.

“I make and sell ideas for a living. Plagiarism makes me no money. Did Yolki 8 make more money all over the world based on promoting it on my idea?
I think so.”

A Creative Offer to Settle the Plagiarism Dispute

Dirdal has consulted with lawyers in Norway, the United States, and Russia about whether anything can be done about the apparent plagiarism, and social media posts he has written about the “theft” have been covered by the press in Norway, Europe, and Russia.

In Russia, his fight against the movie’s production company, Bazelevs Productions, is being framed as a “David versus Goliath” battle.

After not receiving any response from Bazelevs Productions, Dirdal decided to take a different, more creative approach. Working with the Russian press and the Norwegian Embassy in Moscow, Dirdal came up with an unusual offer for the production company: he would allow movie-goers who watch Yolki 8 to decide what amount he should demand from the company.

Dirdal first watched Yolki 8 at his local cinema in Norway and wrote a (scathing) review of the film that was published by GovoritMoskova, one of the most popular radio stations in Russia

If the film Yolki 8 was a pie that the creators would like to share, then only crumbs would be left for the New Year holidays, the public, and art. Those who really ate and were full are greedy sponsors who have too much desire to assert themselves and earn money, as if the film was created exclusively for sponsors, and not for the New Year holiday and Russian film lovers. —Stig Håvard Dirdal in his review of Yolki 8

Dirdal is asking movie-goers to publicly suggest how much Bazelevs Productions owes him for copying his idea by February 15th, 2022. The average amount suggestion will then be revealed by the Russian and Norwegian media, and Dirdal will be demanding that the production company send the funds to the Norwegian Embassy in Moscow.

The photographer says that his goal in all of this is not to make money but rather to defend photographers’ rights and stop people from misusing and plagiarizing photos.

“And if you do it, then it will have consequences,” Dirdal tells GovoritMoskova.