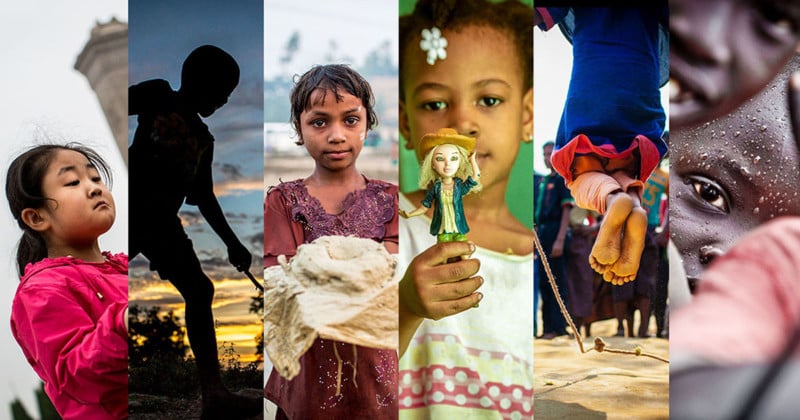 Photographer Nancy Richards Farese has been photographing children for over ten years, from Boston to Bangladesh to Burkina Faso.

Farese attended a lecture ten years ago by Dr. Stuart Brown, founder of The American Institute of Play. He analyzed pictures of animals at play with the idea that all animals are built through play, and humans are uniquely built to play for their entire life. The lecture ended up being a catalyst for her to explore the idea visually — photographing children playing.

“As a photographer, I have trained my lens on play to better understand culture, traditions, and… well human joy,” Farese tells PetaPixel. “In seven years of travel to 14 countries with international aid organizations, I have been in refugee camps in Bangladesh, the remote highlands of Honduras, and the make-shift recovery camps of Haiti, always photographing the despair and trauma but also finding what I call ‘the other story’ — kids sliding down mud hills in the emergency construction of a refugee center, trading sticks for plastic bags to construct kites, and creating elaborate and strict rules for a game of mancala with rocks in the sandy soil of the desert in Burkina Faso.

“These kids are reminding us of the essential nature of play to heal, to adapt to uncertainty, and to practice resilience in the face of chaos.”

Most of the images in her new book, a compilation of almost 100 photos captured as she examined child’s play across 14 countries, have been shot on Canon cameras. Recently she has switched to a Leica Q with 28mm and a Sony a9 with 35mm and 85mm Zeiss lenses. She also uses her iPhone, which makes a low-profile camera while sitting on the sidewalk playing with the kids.

There is nothing frivolous about play. In childhood games like hide-and-seek, we train to navigate a chaotic and uncertain adult world. Play is a complex tool for development and self-preservation that we rely on as we continue to grow —Nancy Richards Farese in The Atlanta Journal-Constitution, July 7, 2020

“What if we invert the frame of ‘adults teaching children’ and think instead about what children teach adults through the simple yet essential act of play?” asks Farese.

“The act of photography itself is inherently playful, so I looked especially for ways that play is used for healing, for a close look at the impact of technology and consumerism in our notions of play, and what it means that we’ve allowed the diminishment of free play in America lives, and implicitly allowed a correlated increase in anxiety, depression, and narcissism in our lives.”

In our world full of phone camera photos, many parents still value a physical print as a valuable keepsake. Farese travels with a small printer (earlier, a Polaroid) to provide images to families. She quotes Susan Meiselas, who said, “the camera is an excuse to be someplace you otherwise don’t belong.”

Farese mostly travels with aid organizations like CARE International, The UN HCR, and Refuge Point. This helps her to get trusted access in remote areas.

Three years ago, I photographed the Rohingya crisis in a Bangladeshi refugee camp where most of the refugees were children, some orphaned just days before. Surprisingly, the most unexpected sound in the camp was not the mournful silence of traumatized people; it was the laughter of children playing on the edge of every frame. Sliding down mud hills and organizing games around bottle caps, these children were instinctively using play to adapt and heal: keenly aware of, yet defying, all that was wrong in their world. —Nancy Richards Farese in San Francisco Chronicle, Feb. 28, 2020

“I became captivated by this powerful example of adaptation, healing, and joy happening on the edge of every frame. So, I turned my camera on children at play, capturing their natural instincts to thrive despite the darker forces surrounding them.”

The Right to Play is a Guaranteed Human Right (Article 31) of the United Nations, which make Farese, who was recently a fellow at The Harvard Kennedy School’s Shorenstein Center on Media, Politics and Public Policy, question our responsibility to support play, at the global level and in our own neighborhoods.

“Potential space,” explains Farese, is a concept developed by Donald Winnicott, an English pediatrician, psychoanalyst, and pioneering expert on child development, who maintained that all human culture is derived from play.

“From the moment of birth, we begin differentiating from our mothers, pushing the edges of the psychic “potential space” between our inner world and outer reality,” says Farese, the founder of PhotoPhilanthropy (2009), and CatchLight (2015). “This is where play happens—when your pillow-fort becomes a kingdom, when you lose yourself in music, or when you are so ‘in the zone’ of joyful activity that you forget time and space.”

Potential Space: A Serious Look at Child’s Play is published by MW Editions