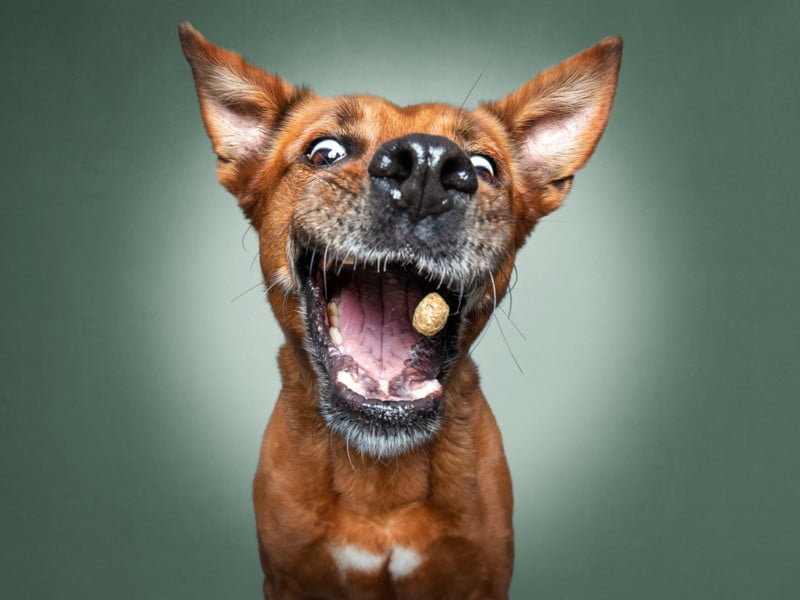 Christian Vieler is a German photographer who has built his career on shooting humorous photos of dogs catching treats.


In each of the photos, the dogs are frozen in time with various expressions on their faces while they lunge with jaws open at tasty snacks flying toward them. 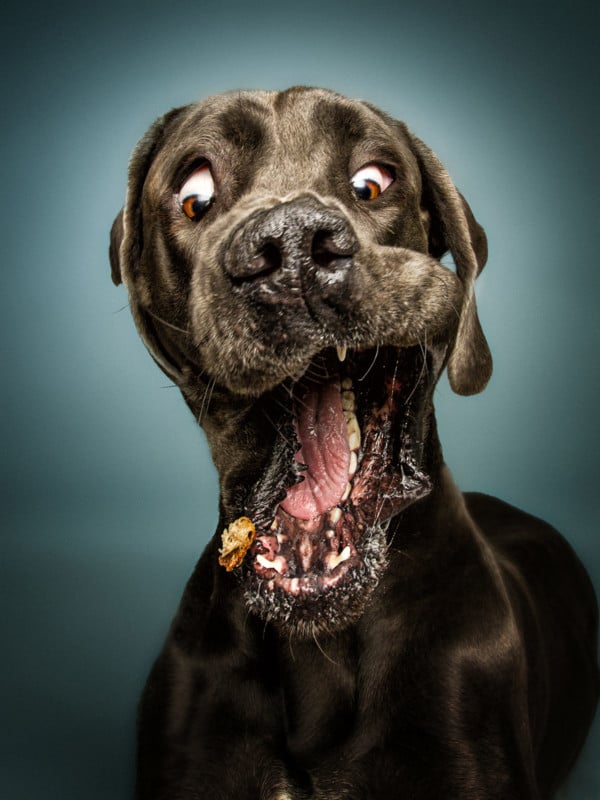 How the Photos of Dogs Catching Treats Started

“I photographed my first dog, a Labrador, every time we were outdoors,” Vieler tells PetaPixel. “At some point, I invested in a mobile flash and I started with studio photography. That was in or around 2013. Then my career started.” 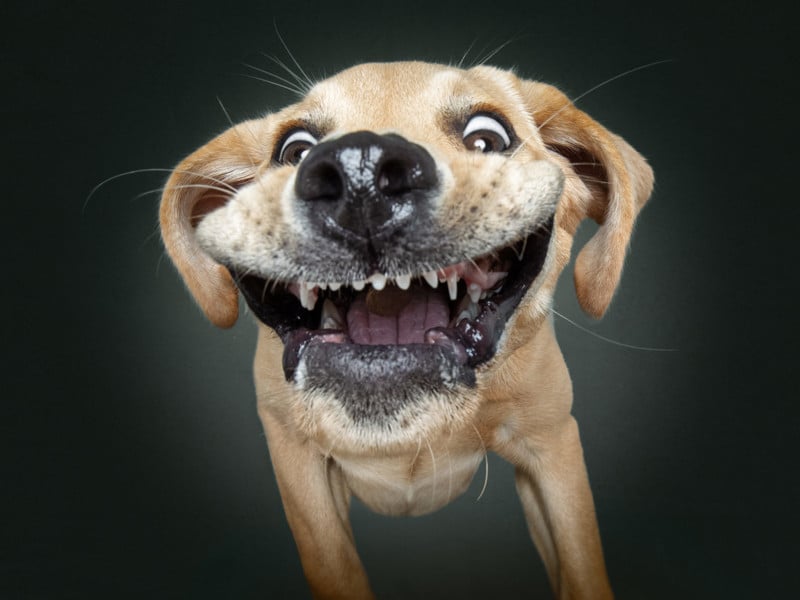 After purchasing that first pricey piece of lighting equipment, Vieler needed a subject to model for test shots. That subject turned out to be his trusty companion.

“I was so excited about my investment of $1,000 that I acted like a little child when it arrived at my house,” Vieler says. “I wanted to unbox it and test it out. The weather was really bad, so I did it all in my living room. I needed some action.

“The most important thing for me was to check how it worked with freezing action because when you do dog photography, you deal with movement and want sharp images.” 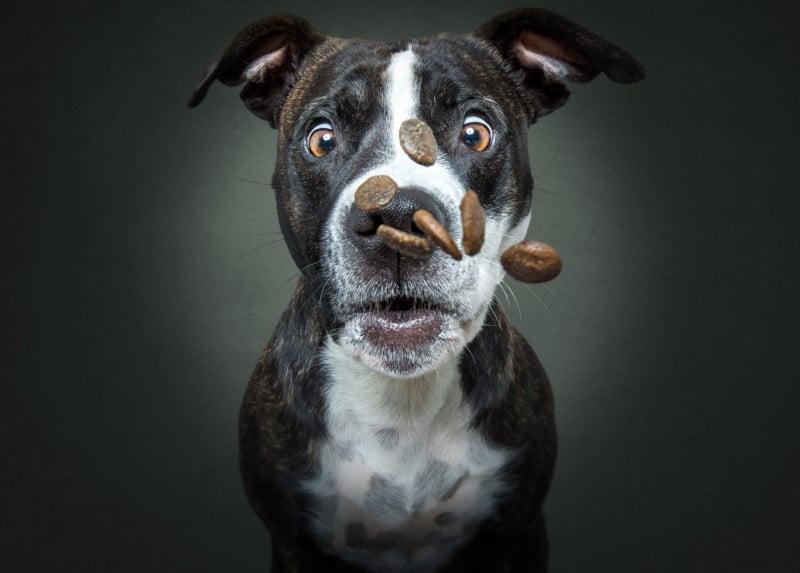 It turned out that his Labrador was too “chill” for creating photos in which movement in the frame is frozen. That’s where treats came in.

It was only afterward, when reviewing the photos, that Vieler realized that he had a hilarious photo idea on his hands.

“When I saw the photos on my computer, I saw the funny results, and that was the beginning of the series,” he says. His goal became to capture emotion on the faces of man’s best friend — feelings such as happiness, desperation, and frustration 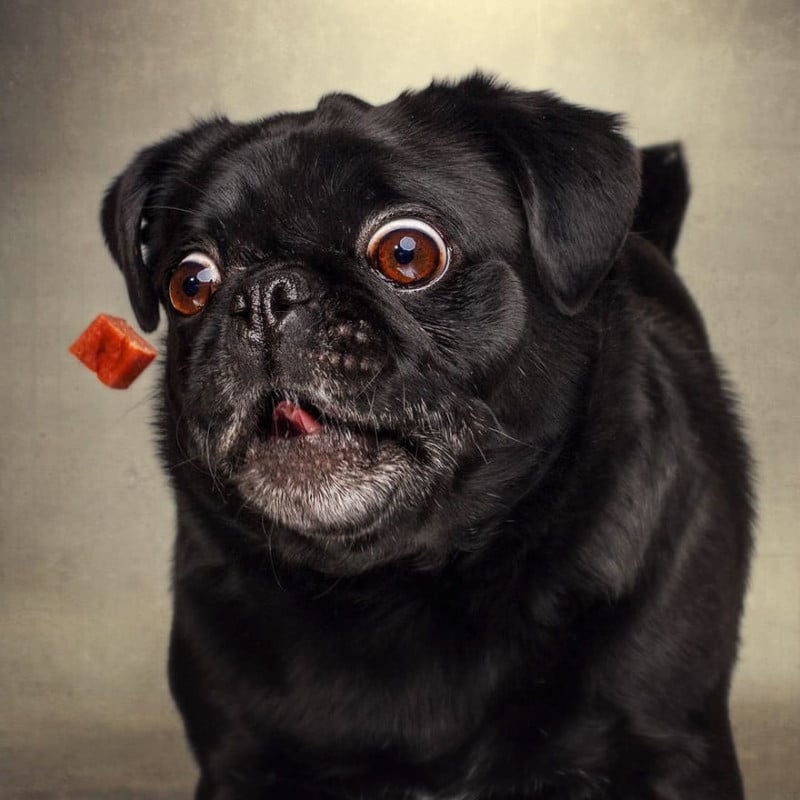 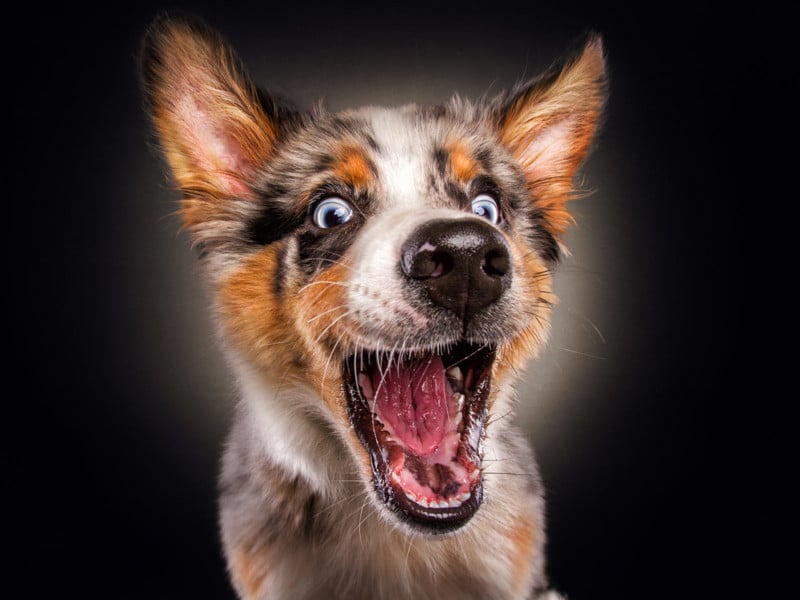 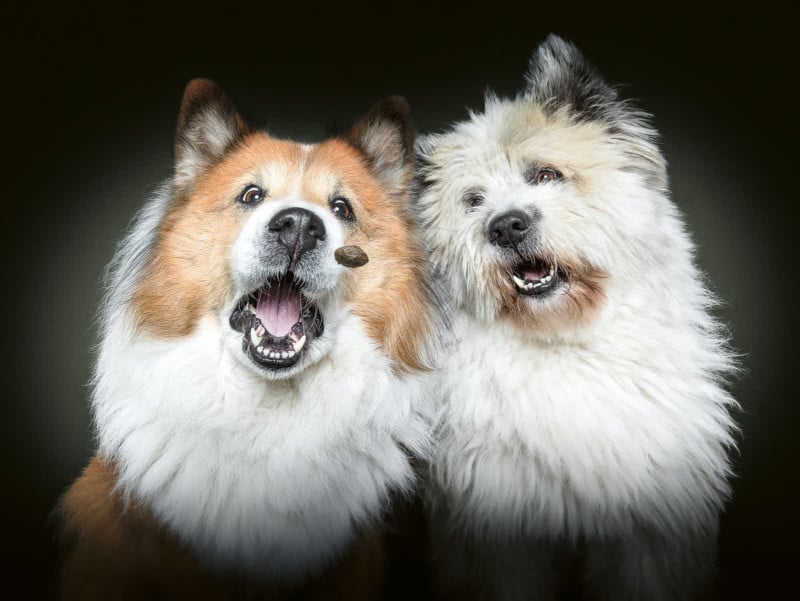 Viral Photos and a Flood of Requests

Vieler’s photos caught the attention of some large publications in 2015, and the project snowballed from there, going viral around the world and Web.

“In 2015, the dogs catching treats series became popular,” Vieler says. “Within 2 or 3 days, the photos went around the world just through social media. That was the point where I started thinking I could go professional. I did that in 2016.”

As more people see the work, Vieler has gotten requests from around the globe from people wishing to hire him for his trademark photos.

“Yesterday, Justin Bieber shared a story with my pictures, and it has since been very much trouble on my social accounts,” the photographer says. “I got over 200 messages from people all over the world asking me if I can go shoot. It’s a lot of work [to handle requests].” 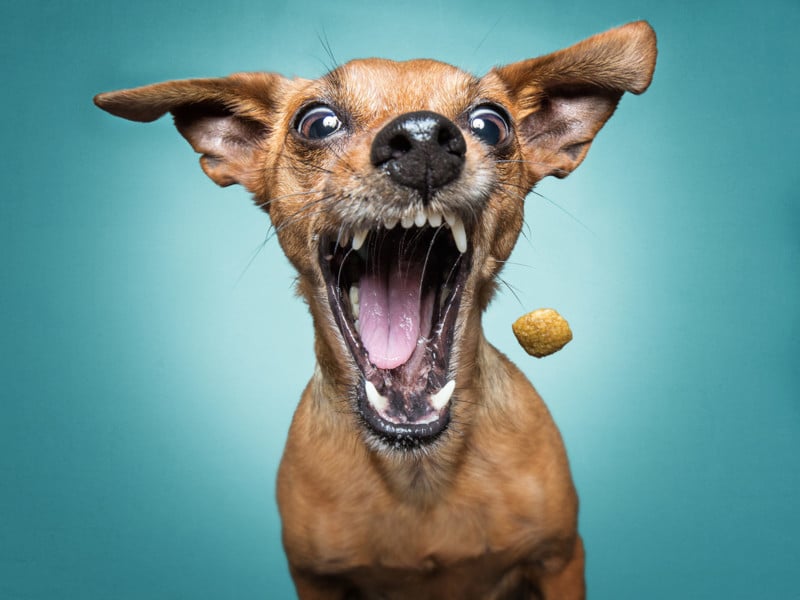 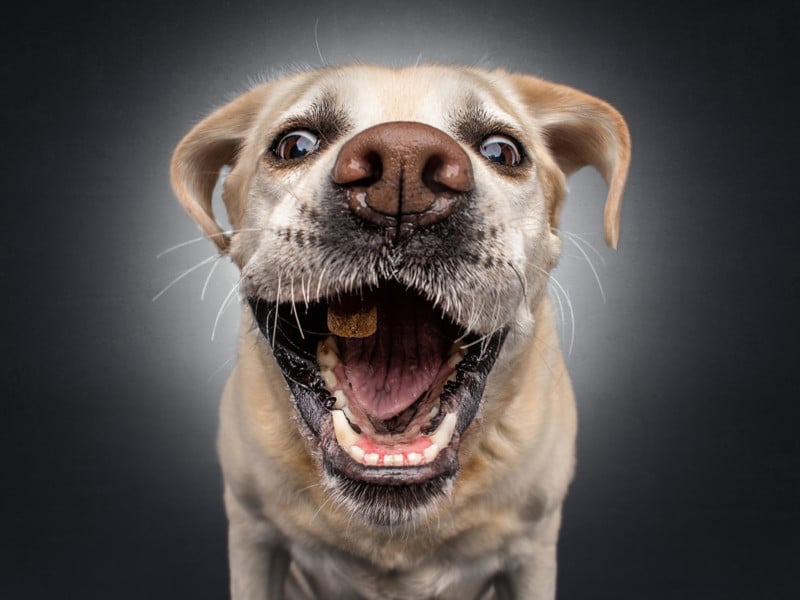 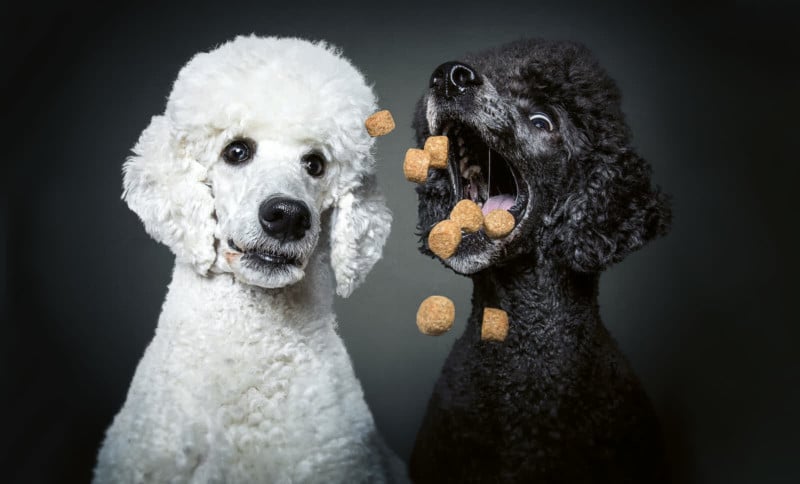 How the Photos Are Lit and Shot

Vieler experimented with various lighting setups early on, but he has settled on mostly using simple setups, which is helpful given his frequent traveling.

“The setup is really simple because there was a time when I did these shots with two, three, or four lights to get the most action in the photo, but after doing this for a while, I recognized that I could do a lot of these effects in editing,” Vieler says. “One fact is that I move around with my shoots, and I go to fairs and shoot a lot of dogs. When I travel I keep it simple with one main light and a big umbrella behind me.” 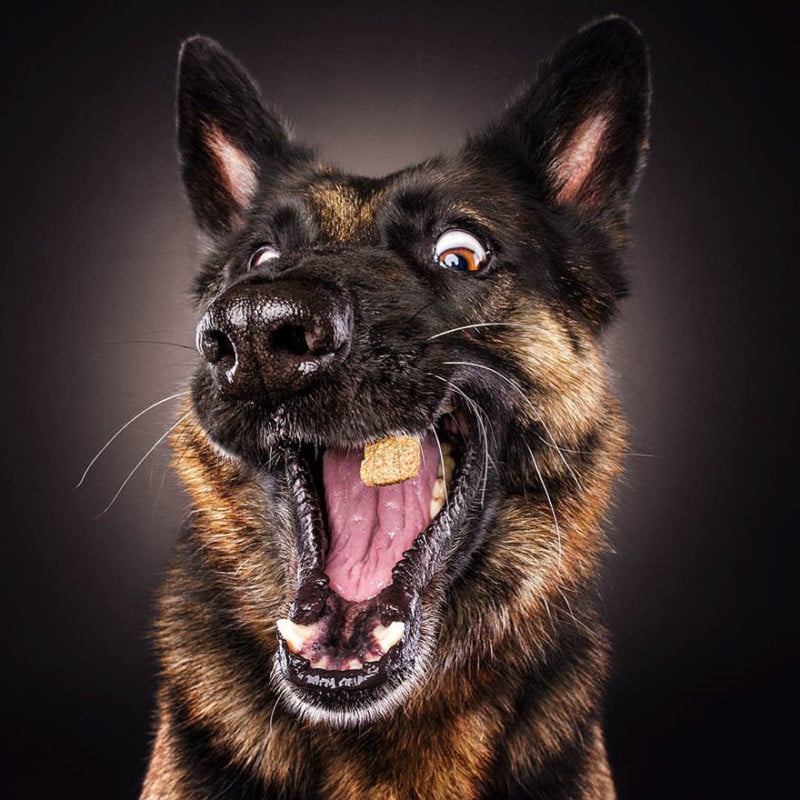 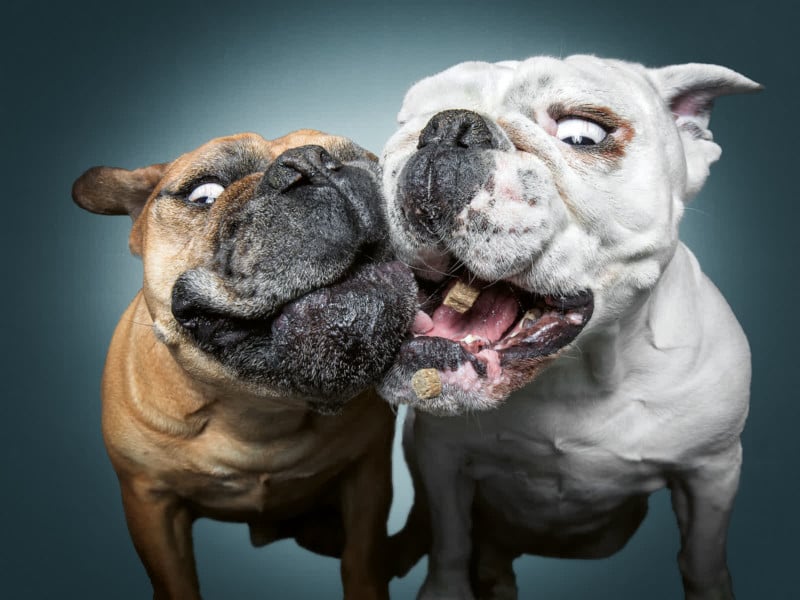 “For everyone who wants to know how this works: you need a flash with a short light duration to freeze the action,” the photographer says. “My settings are 1/160s and aperture of f/11 or f/13 because I work with a 24mm lens. 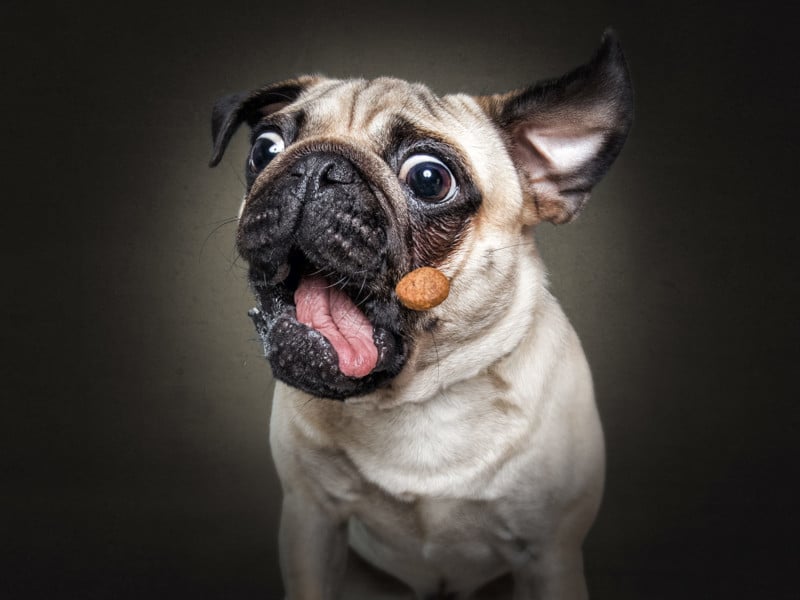 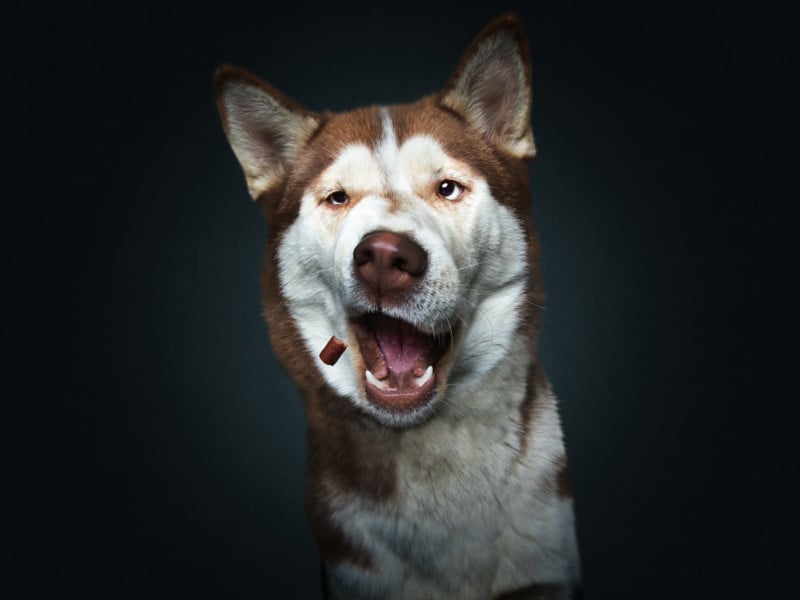 Just as with human portraits, however, Vieler’s work goes well beyond making sure his camera and lighting settings are dialed in.

“The technical aspects are maybe interesting for some photographers, but the main point behind the work is really the work with the dogs,” Vieler says. “The key is to handle the dogs and to know how to work with dogs. No matter if it’s a Chihuahua or a Rhodesian Ridgeback.

“I have to get really close — 24mm is my main lens — you have to go to interact with the dogs. That’s really necessary. If you only say sit and you do a photograph, that is not sufficient.” 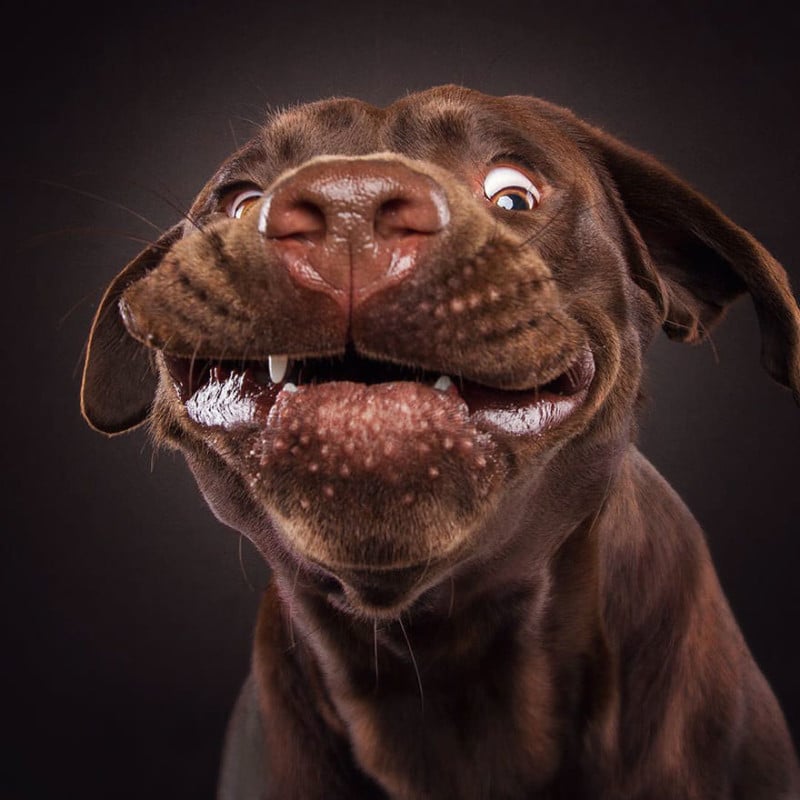 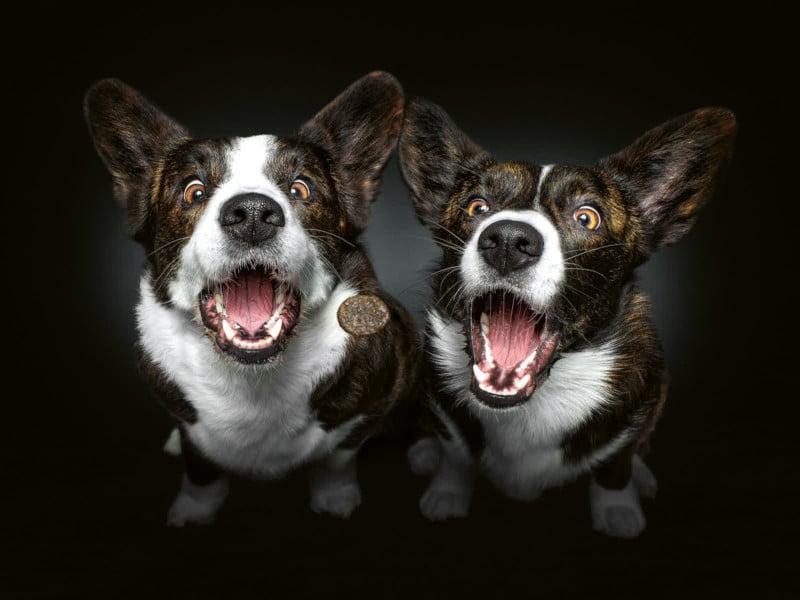 The Project Has Grown Over the Years

Vieler has now captured over 1,000 dogs catching treats and has published two books so far with selections of the photos. They’re titled Treat and Treat Too!.

“It’s really fantastic that you get different expressions every time,” he says. “It never gets boring. My primary income is based on this style of photo, so many clients request this kind of shoot, even if I also do black-and-white portraits and elegant photographs of dogs.”

After photographing individual dogs catching treats, Vieler has since expanded to do two or more dogs at the same time, which he says is “harder to realize and photograph” but at the same time “more spectacular.” 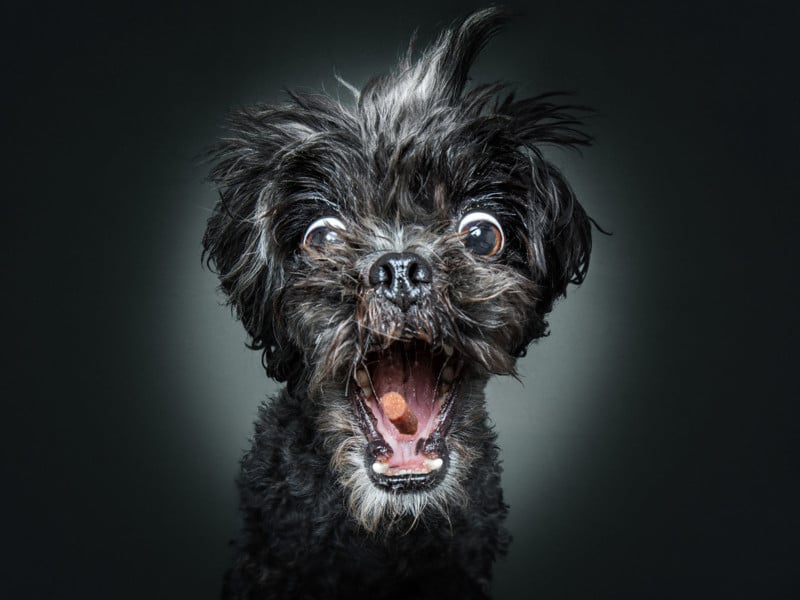 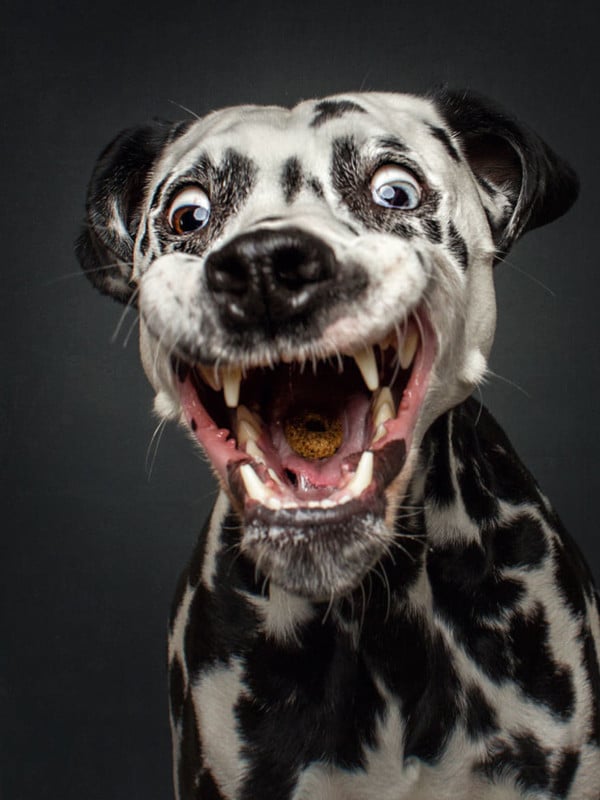 You can find more of Vieler’s dog portraits and stay up to date with this project on his website and Instagram.