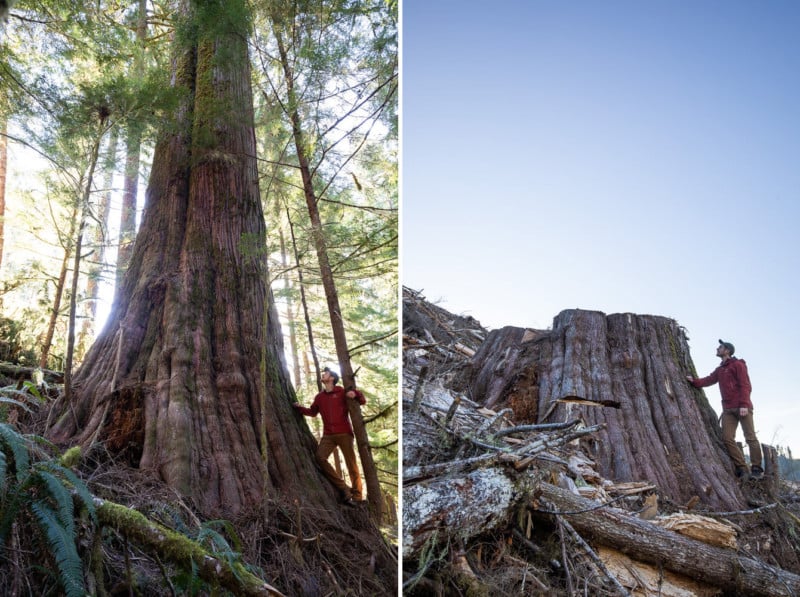 Canadian conservation photographer TJ Watt has been using his camera to protect endangered old-growth trees from logging. His powerful before-and-after photos aim to show the devastation of ancient forests that is left in the wake of clearcut logging.


Watt, who is based in Victoria, British Columbia, works as a photographer and campaigner for the Ancient Forest Alliance, a non-profit organization he co-founded back in 2010.

“We work to protect endangered old-growth forests from logging in BC and as an alternative, push for the transition to a more sustainable, value-added second-growth forest industry,” Watt tells PetaPixel. “I have combined my passion for preserving forests with my photography profession and spend much of my time studying satellite maps, driving backroads, and bushwhacking through remote forests in search of big trees and stumps to photograph and share with the world at large.” 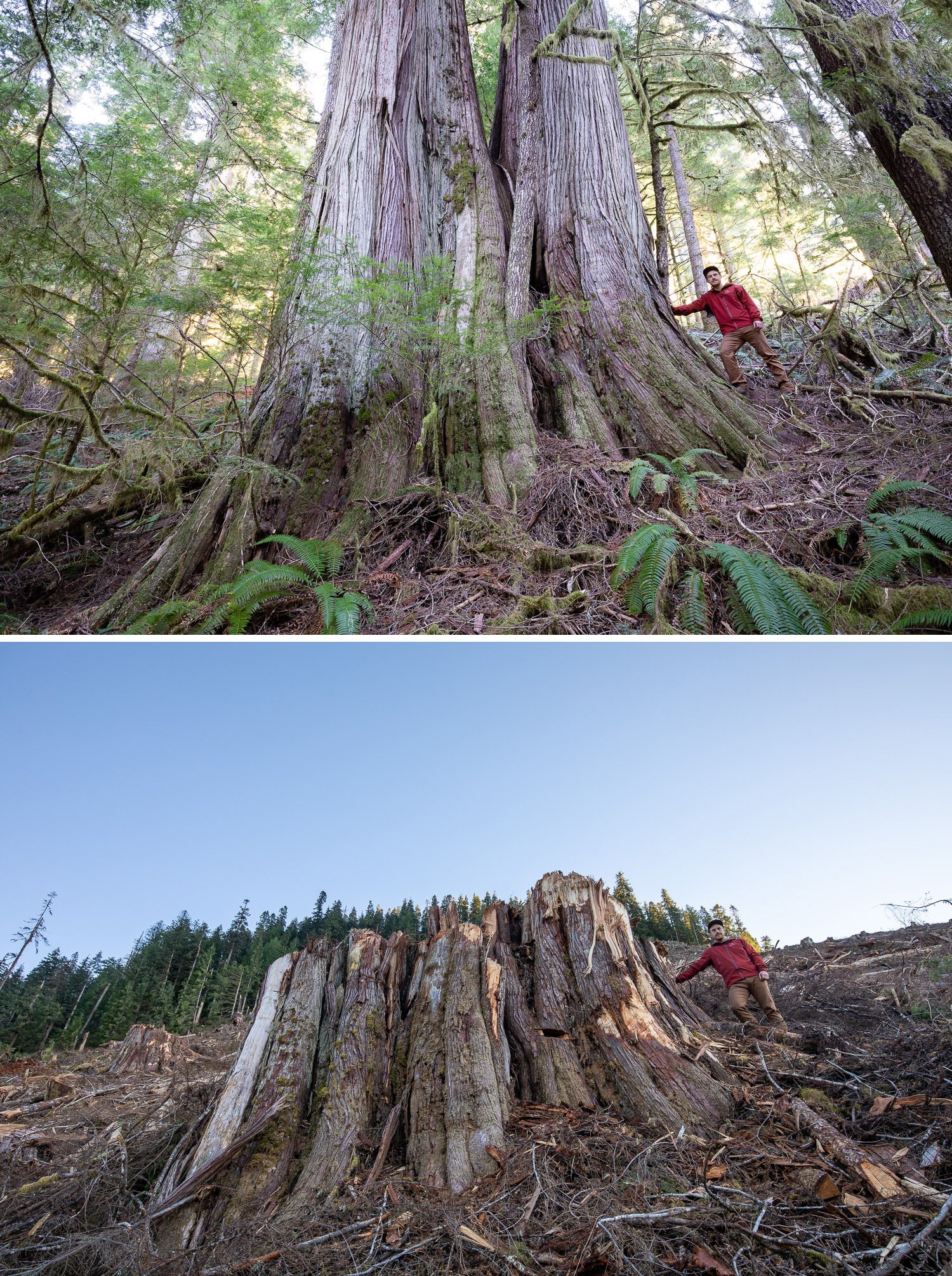 The Practice of Clearcut Logging

Clearcut logging, also known as clearcutting and clearfelling, is when most or all of the trees in a whole section of a forest are cut down. Advocates argue that the practice is beneficial for forest ecosystems, safer for humans, and economical for forestry and logging. Critics like Watt, however, decry the loss of beautiful landscapes, natural habitats, and forests that help prevent climate change. 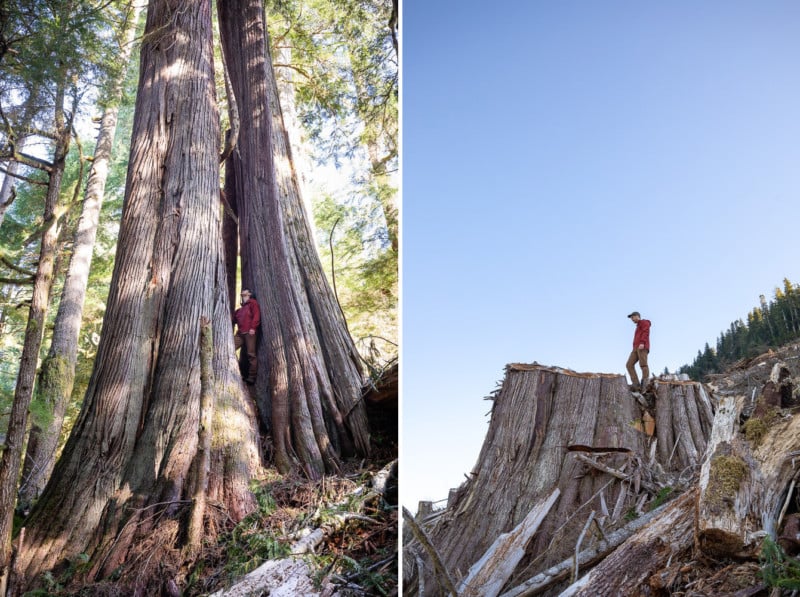 Watt began his photo project that documents the loss of old trees after personally seeing the loss of ancient forests for over a decade.

“Over the past 10-15 years, I’ve sadly witnessed the destruction of many incredible and irreplaceable old-growth forests, forests that rival almost any other on Earth in terms of sheer beauty and grandeur, often with trees upwards of 500-1000 years old,” the photographer says. “It’s nearly impossible to translate into words what the loss of an ancient ecosystem looks like after clearcut logging. It’s total annihilation.”

To show the world what is lost when these forests get taken down, Watt decided to shoot before-and-after photos to show the contrast side-by-side. 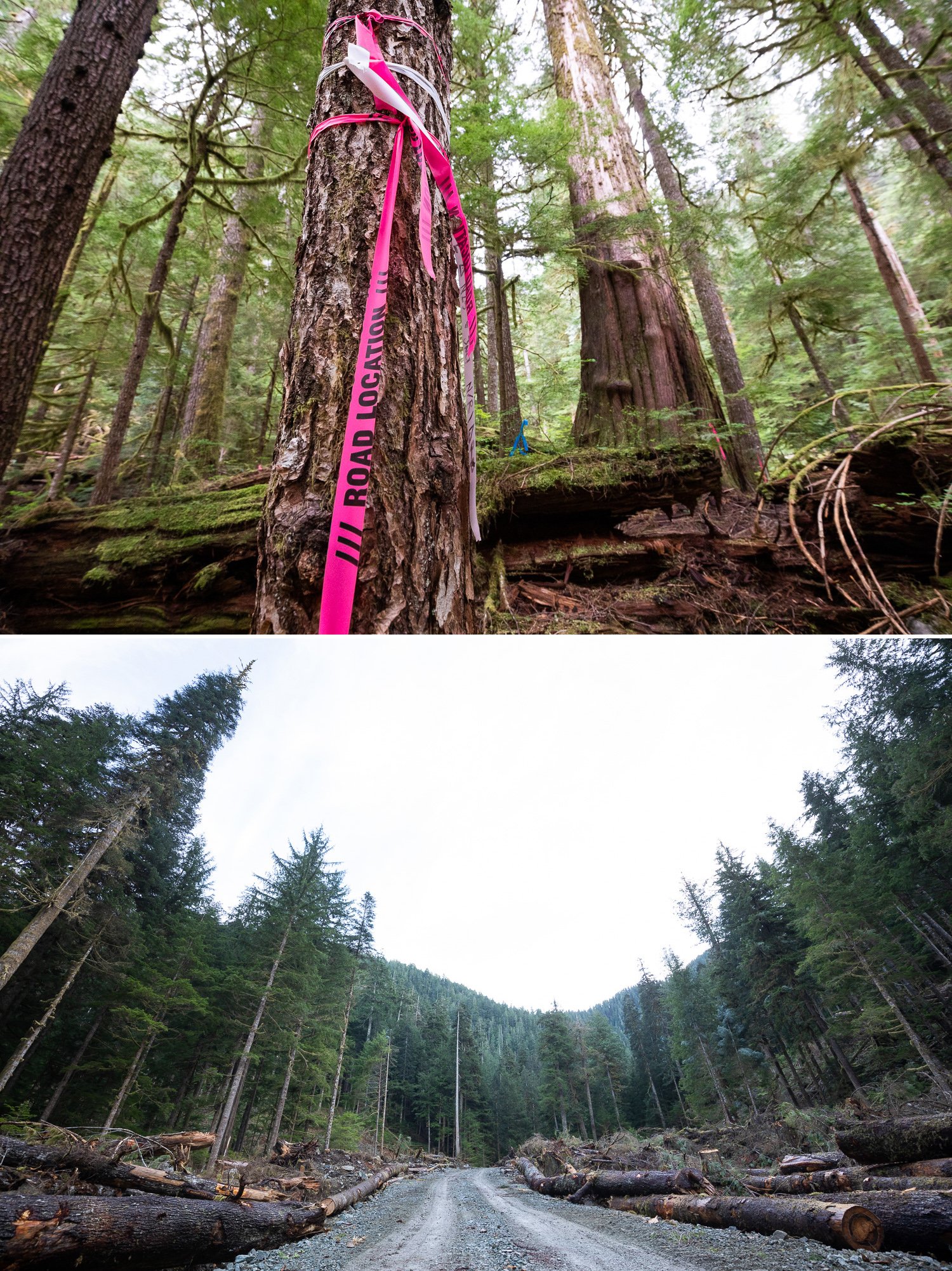 Once the idea for the project had been born, Watt needed to decide where to shoot the photos.

“One day while I was out visiting a spectacular forest I was familiar with in the Caycuse Valley on southwestern Vancouver Island in Ditidaht territory, sadly I discovered logging had already begun,” Watt says. “On the edge of the cutblock stood a giant cedar that I knew would fall the next morning, and unless I captured photographs of it, I would be the last person to see this tree standing, other than the fallers.

“That became the first photo in the series.”

After shooting his first photo, Watt hiked through the forest, capturing more portraits of many of the giant trees before they fell. 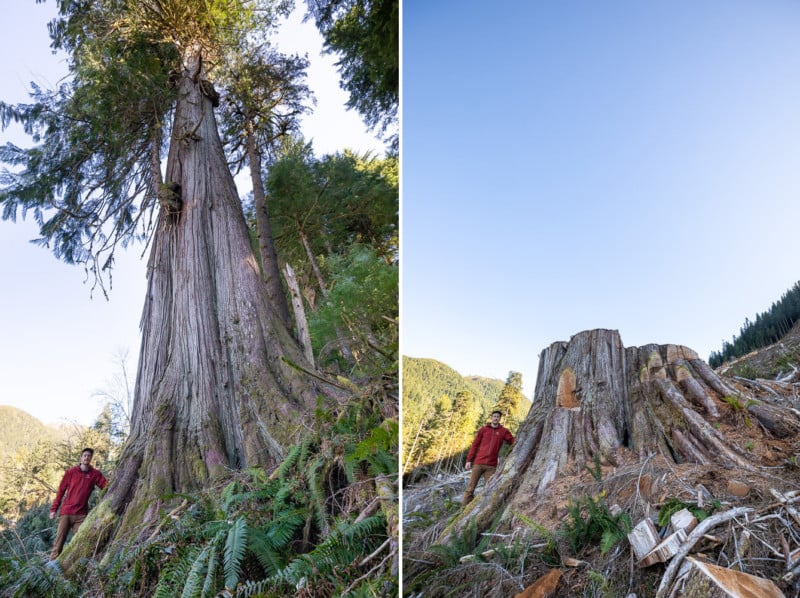 One of the keys to shooting this project was carefully recording each of the “before” locations so that Watt could revisit the stumps “after” logging had occurred.

“I began by recording my route on a GPS and tagging the photo locations as I went along, to later retrace my steps,” the photographer says. “With my Canon 5D Mark IV on a tripod, I would walk into the scene and use the Canon app on my phone to view and shoot the image remotely with a two-second delay. Then I would measure the distance from the camera to the tree, record the lens and focal length used, and take a few reference photos of how the tripod was set up.

“To recreate the images, I found my way back to each spot as best I could, (hard to do with all the logging debris), and referred to the ‘before’ photos saved on my phone to reframe the ‘after’ shots. It was a haunting experience that sits with me to this day.” 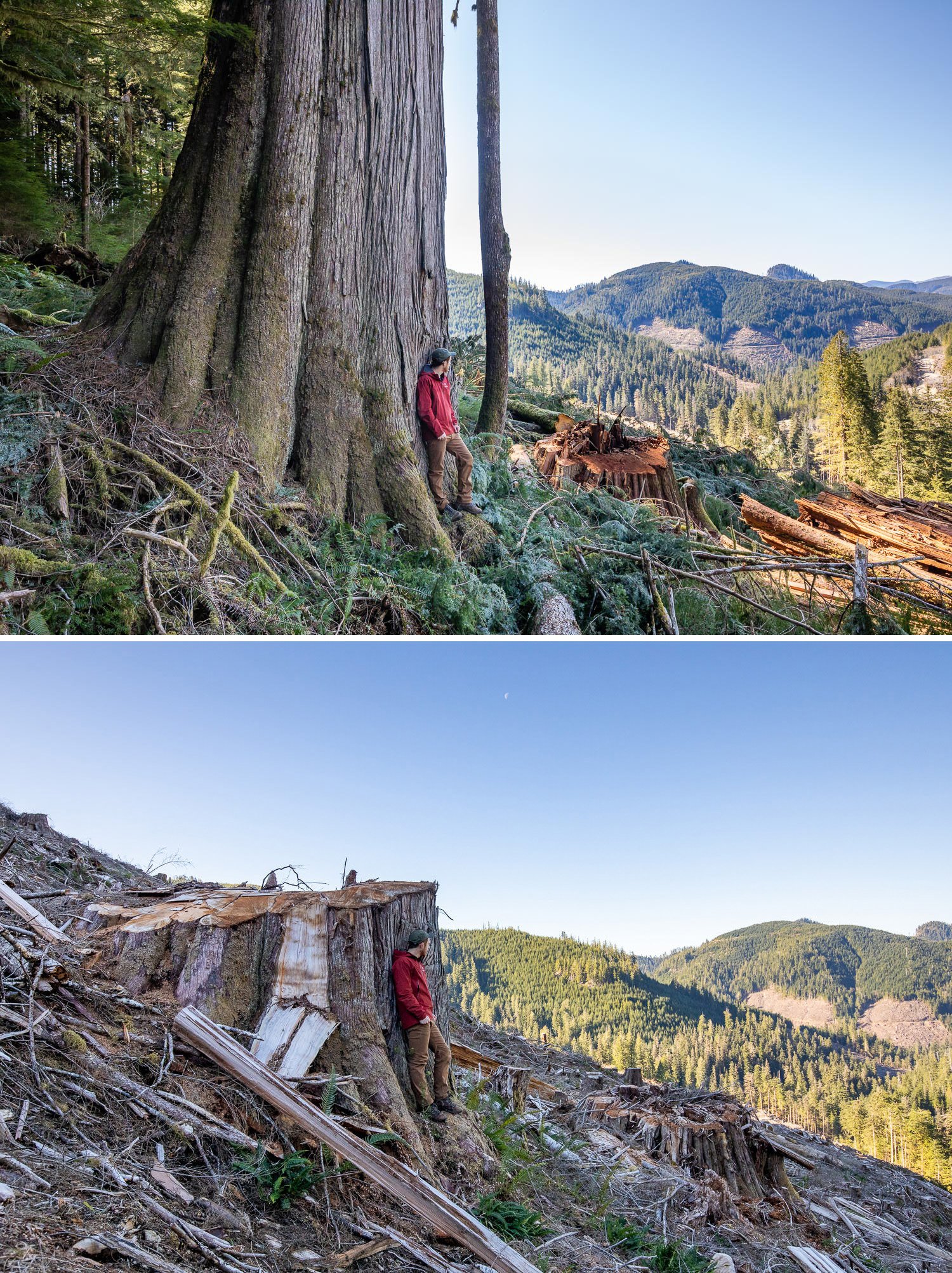 Photography as a Tool for Forest Conservation

Watt says his aim with his photo series is to turn the world’s eyes on what is happening to old-growth forests, especially since most people will never stand among the trees to witness their beauty firsthand.

“My goal is to make people stop and feel something; to expose the continued destruction of highly endangered ancient forests in BC to as wide of an audience as possible, and to ultimately bring about change that will protect them,” Watt says. “Old-growth logging often takes place in very remote and difficult to access regions, making conservation photography a powerful tool to help build broad-based awareness of the threats they still face.” 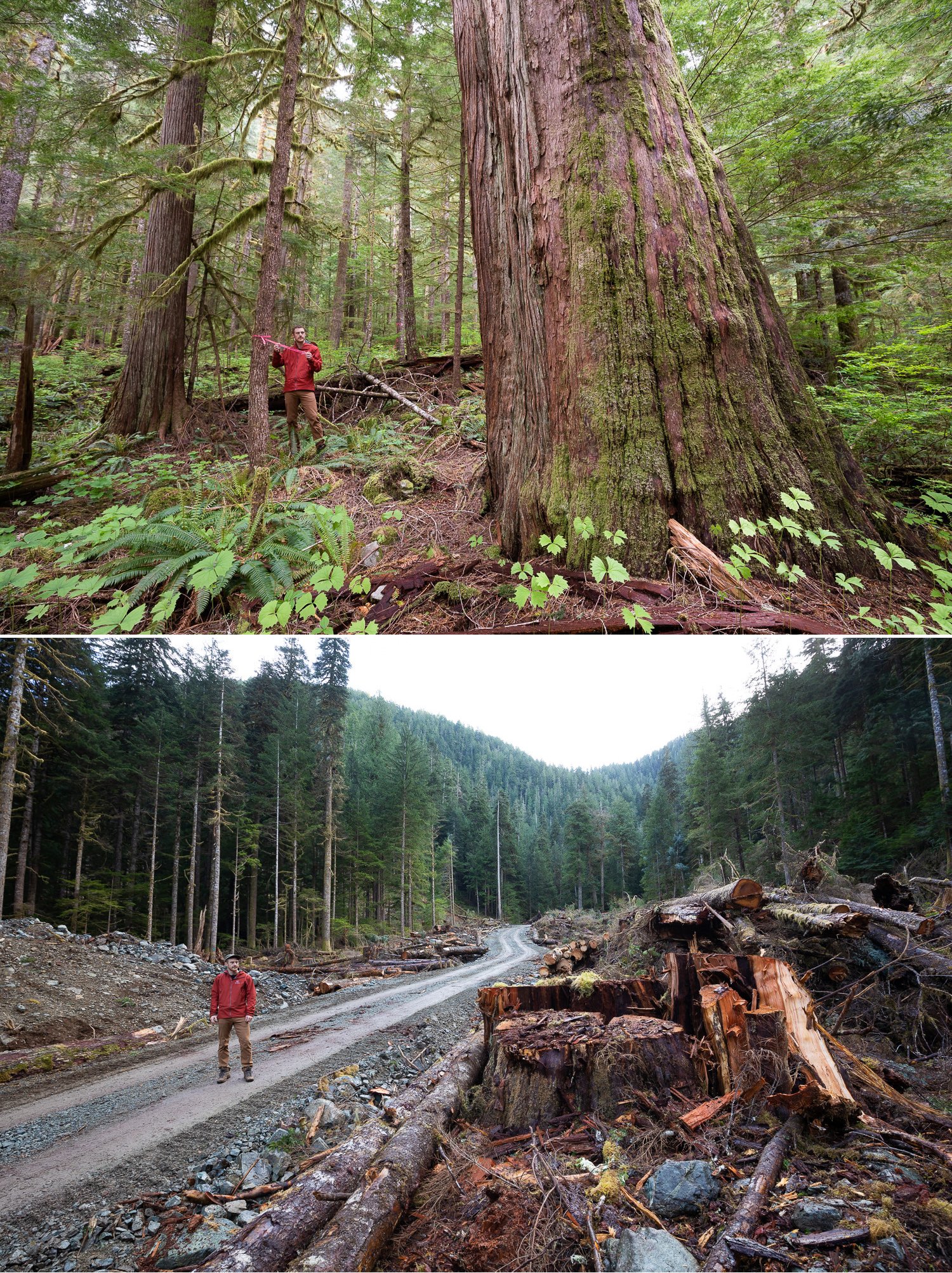 “Right now we are at a critical point in history in the campaign to save ancient forests in [British Columbia],” Watt says. “The government has now accepted — in principle — recommendations from an independent science panel to temporarily defer logging of millions of hectares of the best old-growth across the province, pending approval from First Nations. This is in response to years of public pressure, fueled in large part by viral images we have shared of giant trees and giant stumps.

“Permanent protection is ultimately necessary because, under BC’s current system of forestry where trees are re-logged on average every 50-60 years, old-growth forests are a non-renewable resource. Tree plantations do not adequately replicate the complex and diverse ecosystems that they’re replacing, so we have just one chance to keep ancient forests standing for the benefit of the climate, tourism, wild salmon, endangered species, and many First Nations cultures.” 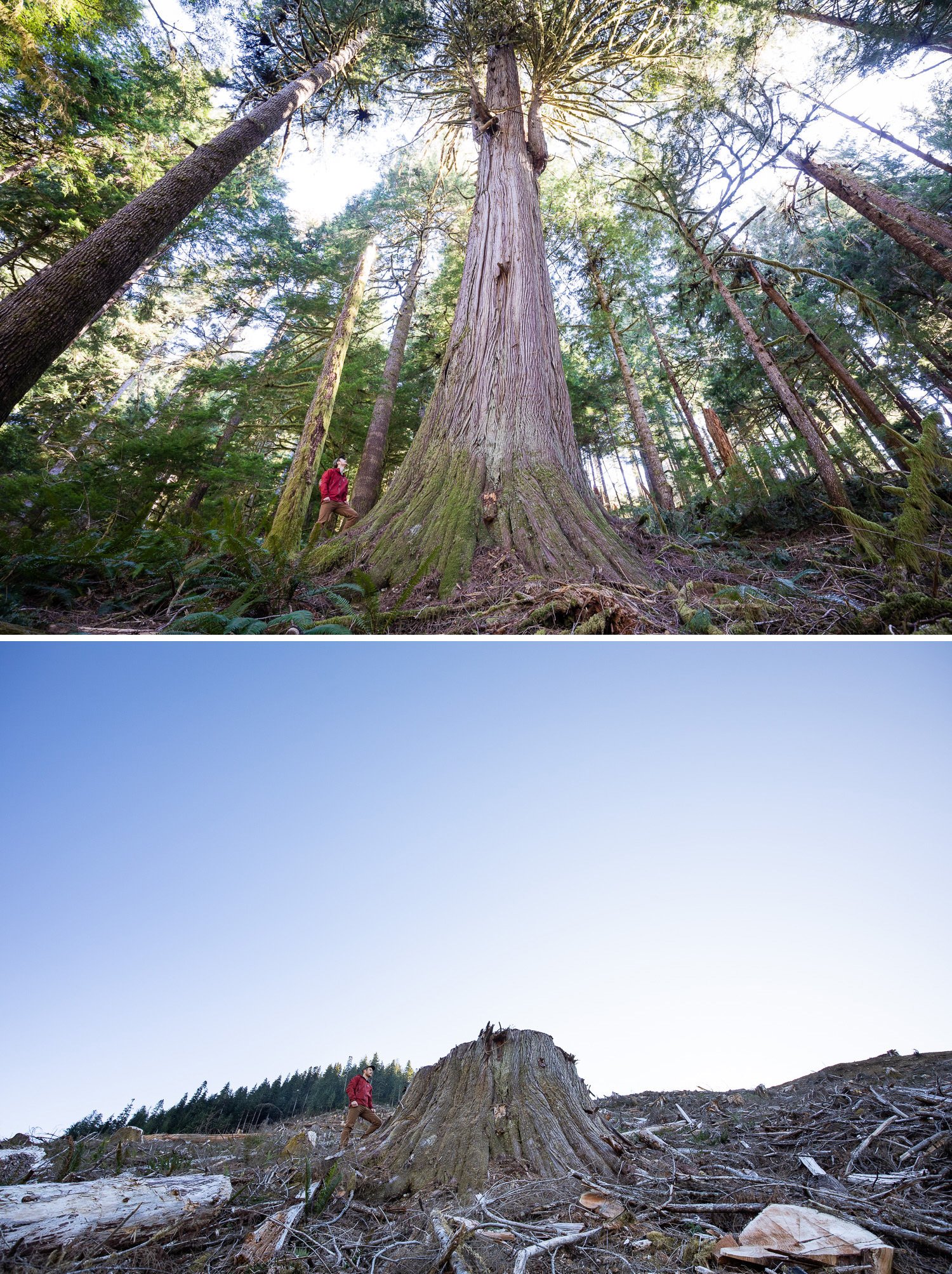 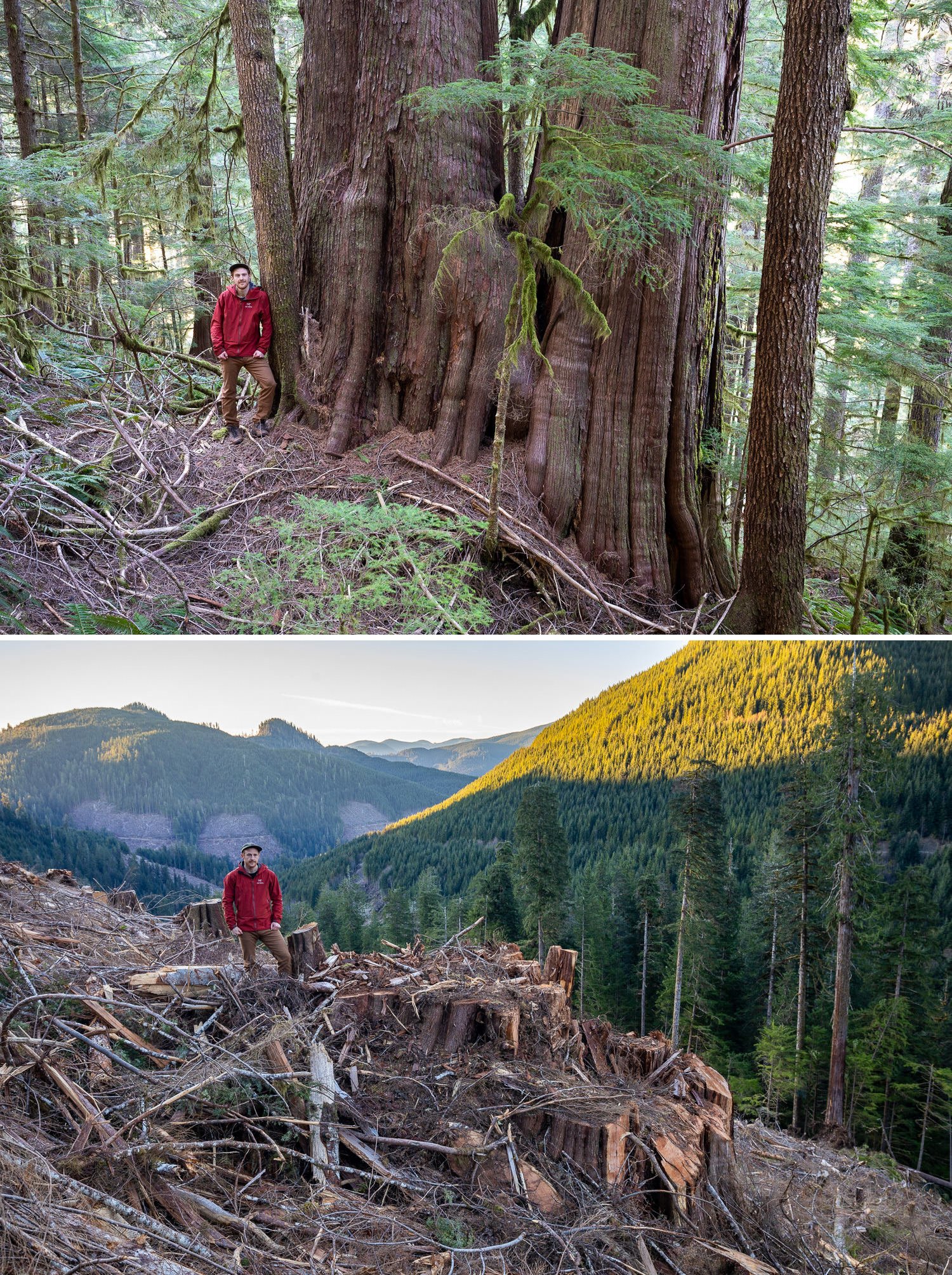 “Though it’s too late to save the trees in these photos, I hope these images motivate people to get involved and advocate for the protection of the forests that are still standing,” Watt says. 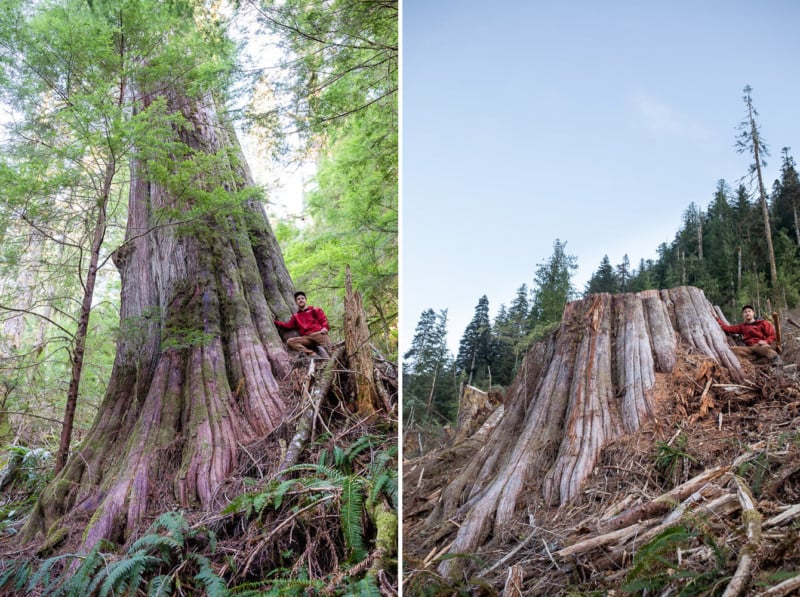