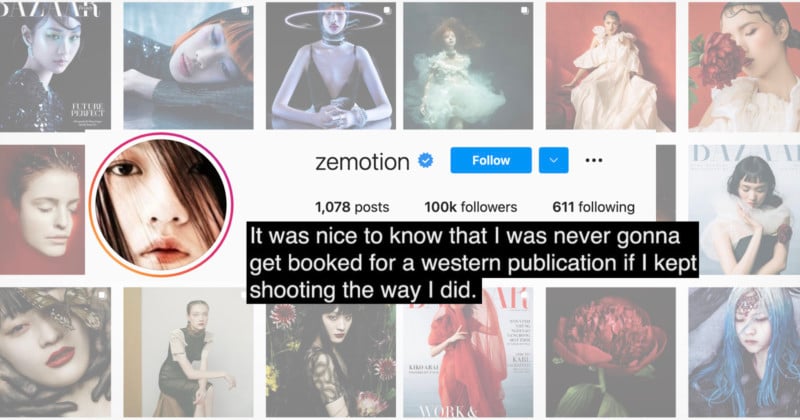 Successful photographer Jingna Zhang, known to many as zemotion, has announced she has quit fashion and calls out a specific instance of racism she faced when working with a western magazine.

Zhang is a widely awarded fashion photographer with over 100,000 Instagram followers. She was born in Beijing and moved to Singapore when she was eight. Before pursuing photography when she was 18, she won notable achievements in air rifle competitions including breaking the record in the 10m Air Rifle event at the Commonwealth Shooting Championships 2005 in Melbourne, and a bronze in the same event at the Commonwealth Games in 2006.

In 2007, she won her first major photography accolade as the Master Photographer of the Year at the Singapore Master Photographer Print Competition. Over the next decade-plus, Zhang would rack up numerous additional awards including Photographer of the Year a the Elle Awards and was named to the Forbes 30 Under 30 list in 2018. Jingna’s photography has graced the covers of multiple high-profile magazines including Harper’s Bazaar and Vogue.

Zhang says her work is inspired by the Pre-Raphaelites and Japanese anime and that it also incorporates Asian aesthetics with western art styles with the goal of bringing painterly images to the fashion and fine art scenes.

In an Instagram post published today, Jingna announced that she has quit fashion photography. Additionally, and because she no longer has to concern herself with insulting prospective fashion clients, also recalls a specific instance of racism from her past “some years ago” during a portfolio review with a “prestigious” magazine in the west.

“I decided to quit fashion so it’s probably fine to share this now. Some years ago I met an editor from a prestigious magazine at a portfolio review,” she writes. “I don’t remember the exact words now but gist was: ‘I’m sure this aesthetic — *gestures at my covers* — works back where you’re from. But these perfect brows, black hair, red lips—it’s too much. It’s wrong for the western market.'”

While she says she appreciated his honesty, Jingna says it was the delivery and choice of words that stuck with her, as she believes she looks exactly like the images she was being told were not a fit.

“Have you… seen me? Black hair red lips pale face. Tell me my taste sucks or my eye isn’t good enough. But this delivery, especially when I think is unintended, felt like a rejection of my entire culture. Saying that we’re wrong for what we found beautiful since ancient times because a non-Asian says so,” she writes.

“I went home and cried for 2 weeks every day. Just sat in the kitchen and randomly burst out in tears. It’s clearly me that’s representing my culture wrong and not doing a good job. Why do I suck? Why can’t we like the things we appreciated ‘back where I’m from’?”

Zhang says that the conversation made it clear to her that she would never shoot for a western publication if she did so in the style that made her popular.

“At least I no longer wondered what decision makers at the highest levels truly thought. I already had self-loathing for my work before, but after that review I always feel so sick every time I make pictures.”

Lillian Liu, a photographer who shoots in both Vancouver and Europe and has 119,000 followers on Instagram, responded that she faced similar criticism in her past.

“This hurts because the ‘anime isn’t the right kind of art’ thing I did remember hearing — and it discouraged some kids around me who made that their passion. I understand that they’re trying to market something to a target audience… but at the same time, I can’t help but feel that the way they approached it was extremely insulting. So sorry for these experiences — you are a great bastion for respectfully representing Asian beauty and beyond.”

“Sometimes it really sucks to know how you look or what you make will never be accepted or good enough because your starting point is all wrong,” Zhang concludes.

“So yeah, this editor was just being honest and I need to see a therapist. But that’s the energy I get when people use words like ‘back where you’re from’.”