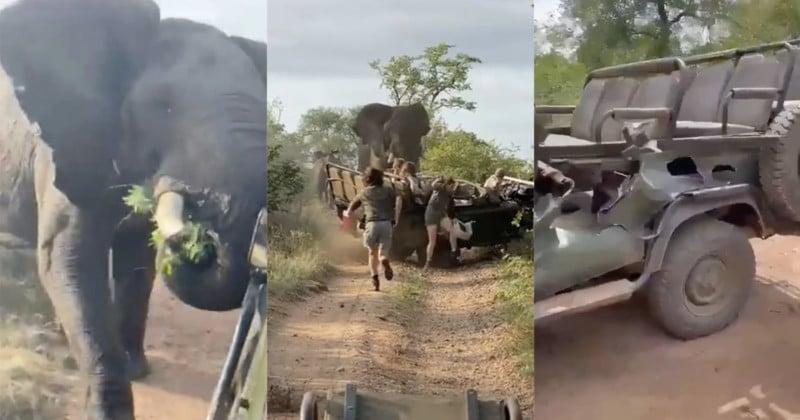 A group on a safari expedition at an African wildlife reserve had a terrifying experience when a massive bull elephant charged their truck, gouged it with its tusks, and nearly flipped it over. The whole incident was caught on camera.

The encounter occurred on Sunday at the Selati Game Reserve in South Africa and involved safari vehicles occupied by instructors and trainees from EcoTraining, a prominent company that trains safari guides.

One video captured by a member of the group shows the lead safari vehicle coming to a stop on a road blocked by a herd of elephants. Suddenly, a bull elephant charges out of some trees and bushes to the left of the road.

The elephant stops briefly before lowering its head and ramming the truck with its tusks, pushing the vehicle sideways as the occupants jump out and run away.

Too much intrusion will take your life in Wilderness. However, wild animals keeps on forgiving us since long.#responsible_tourism specially wildlife tourism should be educational rather recreational.
हांथी के इतना घुसा नही जाता 🙏 watch second video too pic.twitter.com/AOKGZ2BAjB

A second video, captured by someone in the trailing truck, shows the evacuation of the rammed truck as the elephant turns and stomps back into the brush.

In other news:It looks like uGatsheni was having none of it!😂😂 pic.twitter.com/bETQdbz1Az

A third video captured soon after shows the aftermath of the attack — the truck has been crumpled in parts like a soda can and huge gaping holes can be seen in the door and in the body.

As these videos of the attack started going viral, EcoTraining released a statement to confirm and explain what happened.

“On a routine activity, the EcoTraining instructors and trainees came across a breeding herd of elephants,” the training company writes. “The vehicle stopped to observe the elephants and give them a chance to settle down. An elephant bull, who was with the breeding herd, mock-charged the vehicle.

“The elephant bull mock-charged again, when they moved forward slowly, and then made contact with the vehicle and displaced it off the road. Once the vehicle had come to a standstill, the trainees were moved to the second vehicle that was parked in close proximity.”

The company adds that no one involved in the incident was injured and that it was all due to the fact that bull elephants in mating season “experience high levels of testosterone and may display aggressive behavior.”

If you are planning to go on an African safari to see and photograph wild elephants, perhaps consider going when it’s not breeding season…