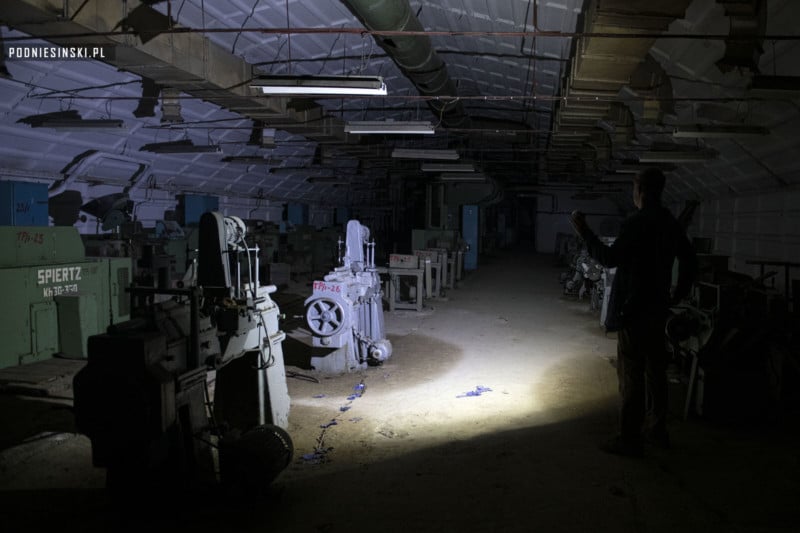 In the 1960s and ‘70s, the town of Poliçan was one of the largest and most important armaments centers in Albania. For security reasons, most information about the site was top secret and the town itself was closed to foreigners.

Today, it is known that it was built for the employees of the Poliçan Mechanical Works, which specialized in the production of ammunition of various calibers, including for the AK-47 rifle (popularly known as the Kalashnikov), mortar rounds, offensive and defensive grenades, as well as anti-personnel and anti-tank mines.

The latest French machinery was used for this purpose, although to this day it is still not known how the communist authorities managed to purchase it from that country. There were over 100 of them, each capable of producing nearly 30,000 rounds per day.

At its peak, about 4,000 people worked at the plants in three shifts. However, in the late 1990s, as a result of the collapse of the communist regime and the loss of the ability to compete in the international arms market, production declined. The factory fell into financial trouble and was closed. At the time, much of the production equipment became redundant and some were scrapped, sold, or stolen.

In 1997, civil war broke out and the city experienced riots. The city fell into rebel hands and the production complex was temporarily taken over by criminal gangs. In later years, the Albanian government tried to resume operations by changing over the remaining production lines to demilitarizing old, expired ammunition and explosives.

Eventually, the factory was closed for good. Nevertheless, it is still closely guarded today. It’s as if it’s still believed that in the future, after modernizing the plant, getting a financial injection, or a lucrative contract, production will again become profitable, and the machines needed.

The military complex lies in a small valley, just off the southern edge of the city. It is surrounded on one side by hills with olive and grape crops, and on the other by concrete and metal entrances to the underground warehouses and tunnels.

There are more than 20 industrial buildings of various sizes on the grounds. Most look abandoned, with broken windows or no doors or windows at all. No smoke comes out of any of the rusting chimneys and there’s no sign of any activity outside of security. It’s hard to imagine that this quiet place once had such an explosive history. That’s what made us decide to visit this place. 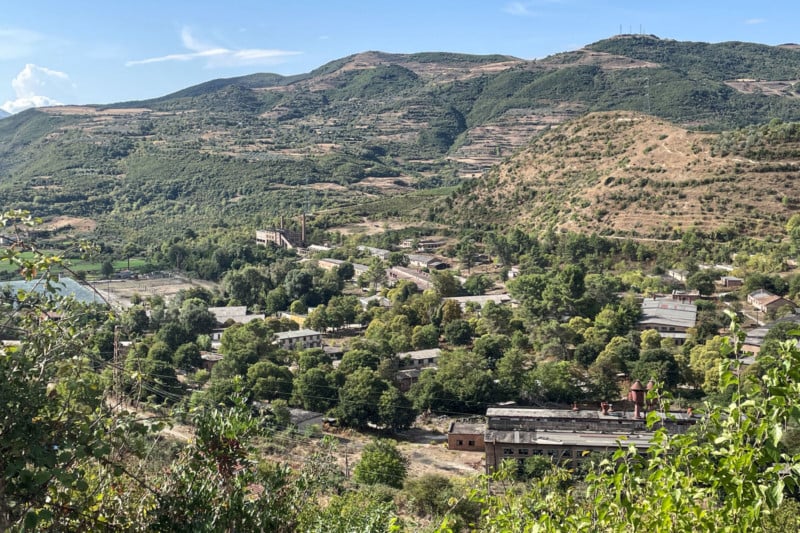 Finding the entrance to the underground tunnels drilled into the mountainside, where perhaps one of the ammunition production lines was hidden, is not a big problem. It’s harder to get inside because the massive concrete gates, 6 meters high and weighing several tons, effectively block access and guard its secrets. It’s impossible to force them open.

Just as we are about to check out the next entrance, my attention is drawn to four small vents above the gates. We decide to see if we can squeeze through them to get inside. Propping myself up on the solid steel hinges, I climb over the top edge of the concrete door. Immediately, I feel a gust of cool air, indicating that the narrow tunnel behind the opening is unobstructed. Unfortunately, thick steel bars have been installed at its end. The same goes for the second and third passages. But the fourth and final opening is clear. We’ve gotten lucky. 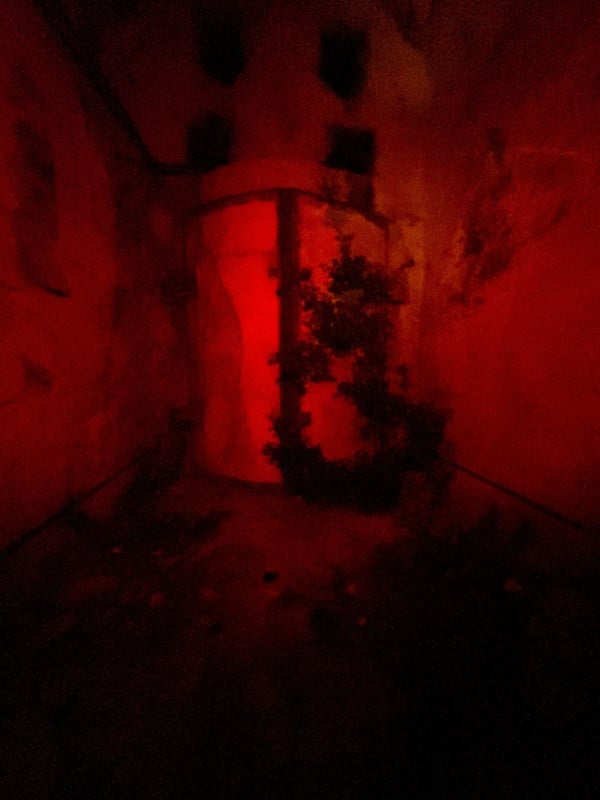 There is an overwhelming silence inside, broken only by the sound of our footsteps. Our flashlights are not able to illuminate everything, which only increases the aura of mystery and fear. We wander around for a while looking into different rooms, but we find nothing. It seems that the tunnel is empty.

The next one connected to it is as well. No machines or other traces of ammunition production remain. When we decide to return to the exit, our attention is drawn to a door leaning against the wall. When we come closer, we discover a small hole in the brick wall behind it. Someone must have blocked it on purpose. I squeeze through.

It turns out that the door was hiding a passage to more tunnels. I counted at least four of them. Each is over 200 meters long and divided into one larger and several smaller production halls, workshops, and warehouses. They are connected to one another by smaller corridors and connecting passages, creating a complex underground maze. You could easily get lost here.

In the glow of our flashlights, the first outlines of the machines emerge. After almost two decades of disuse and lack of maintenance, most of the corroded devices are probably only fit for scrap. I try to guess what they were used for. Presses and extruders most likely needed to press and form shells from brass rods. There are shells, bullets, and even finished cartridges of various calibers lying around everywhere – on floors, tables, machines. 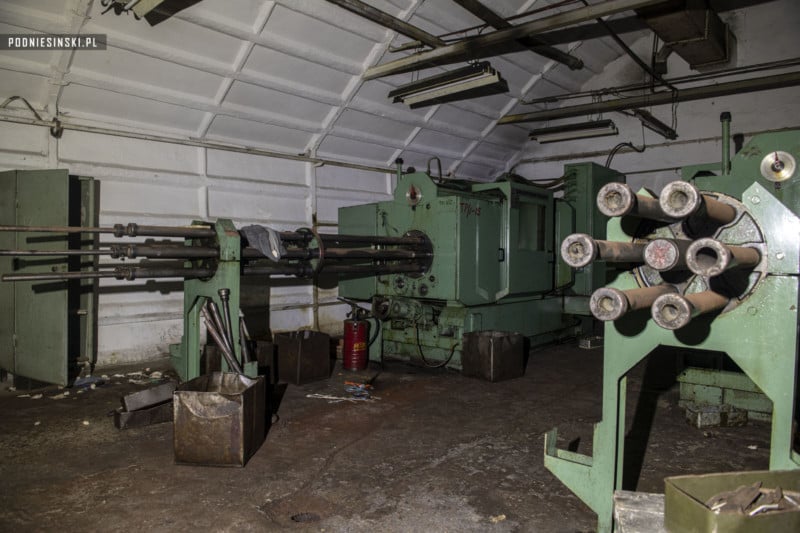 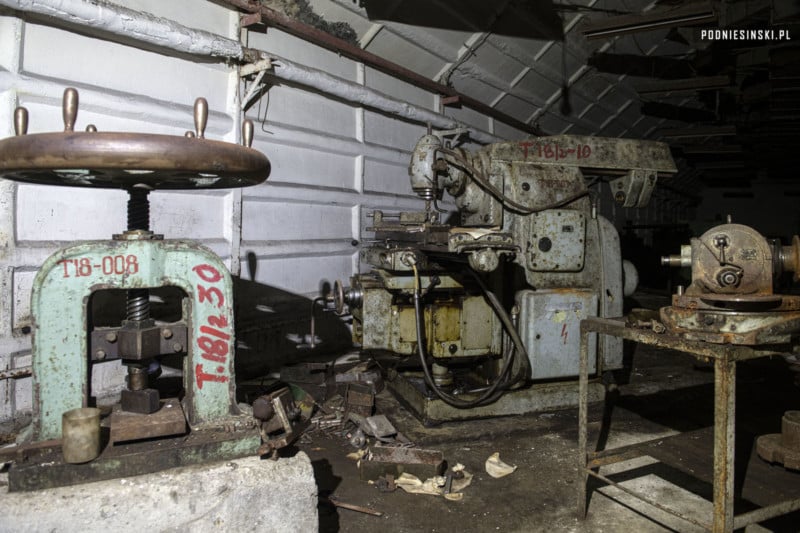 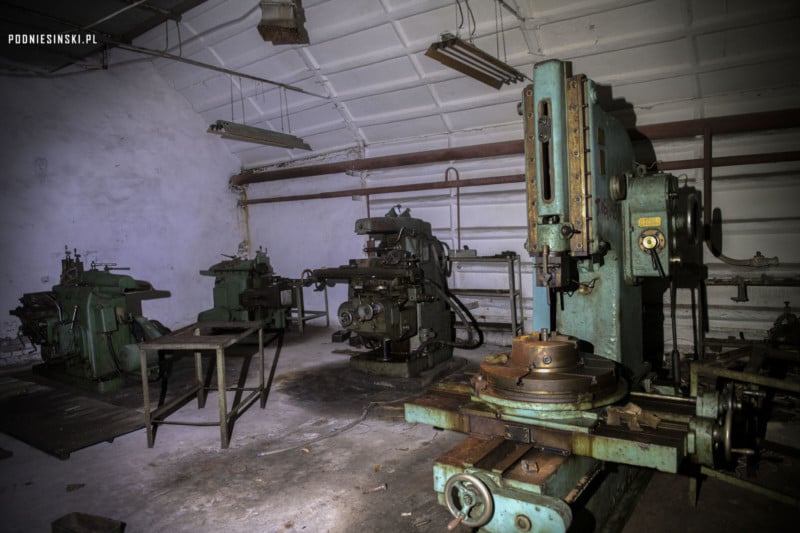 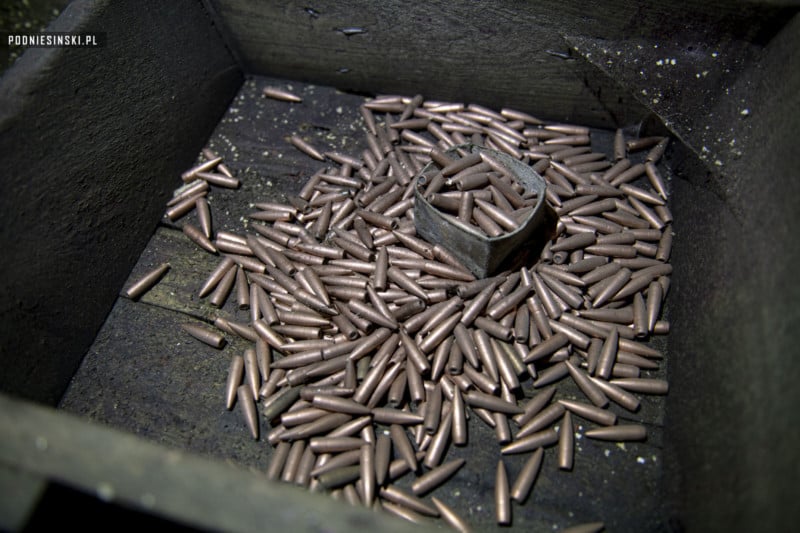 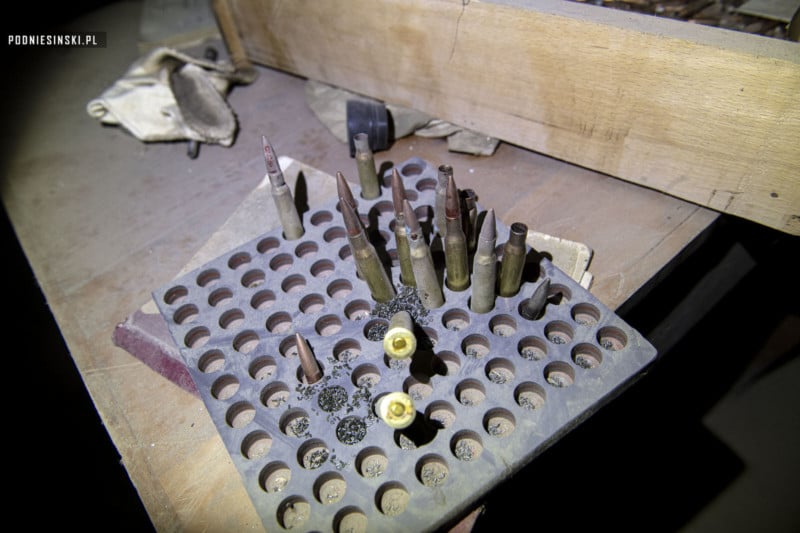 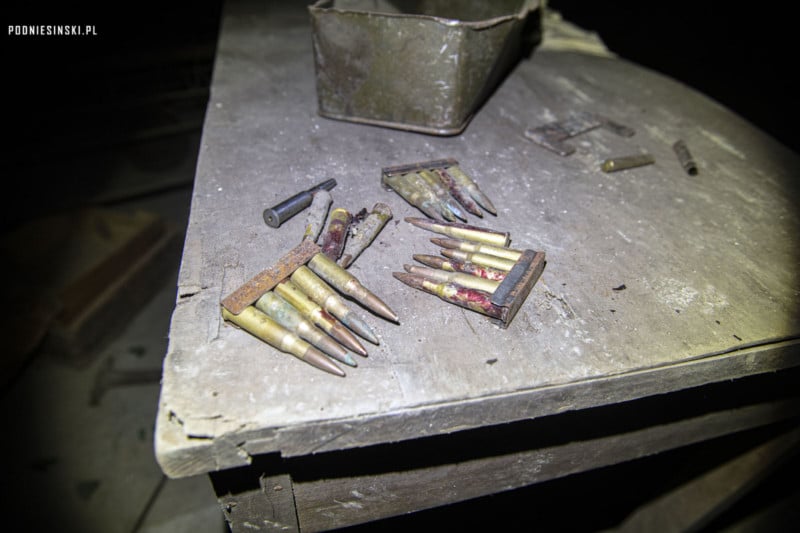 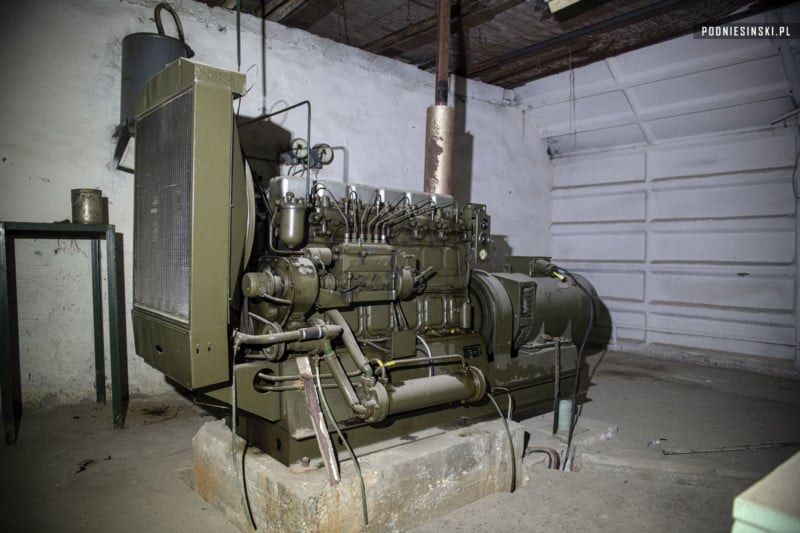 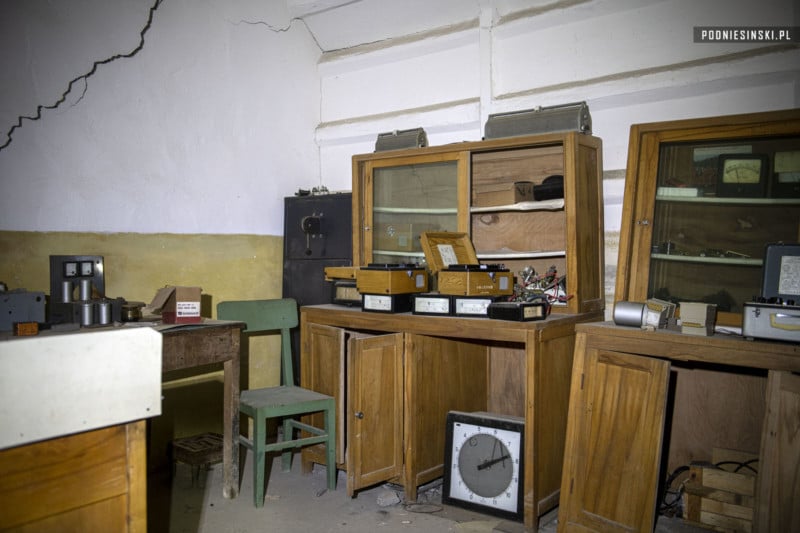 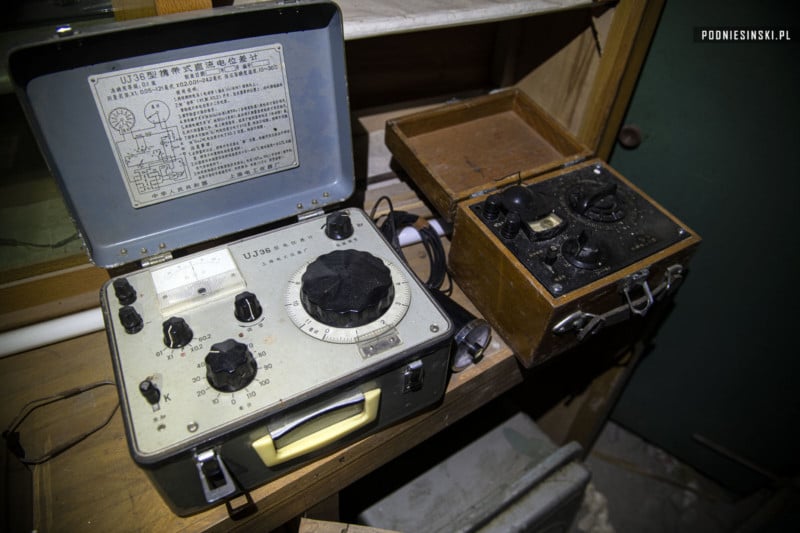 The second tunnel is filled with large rotating drums probably for heat treatment, i.e. tempering the metal of the shells to their required mechanical properties. The next room was where bullets were made. Here, thick, cylindrical pieces of metal were rolled and then cut to the appropriate length and formed on a hydraulic press. 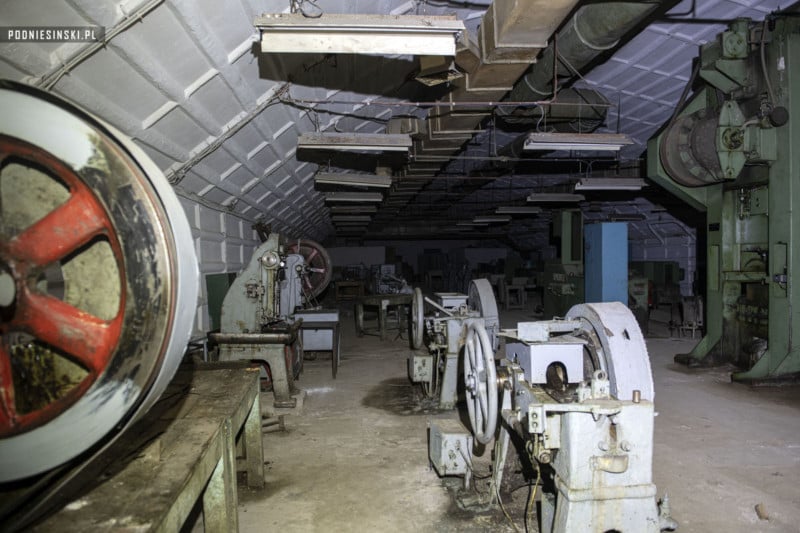 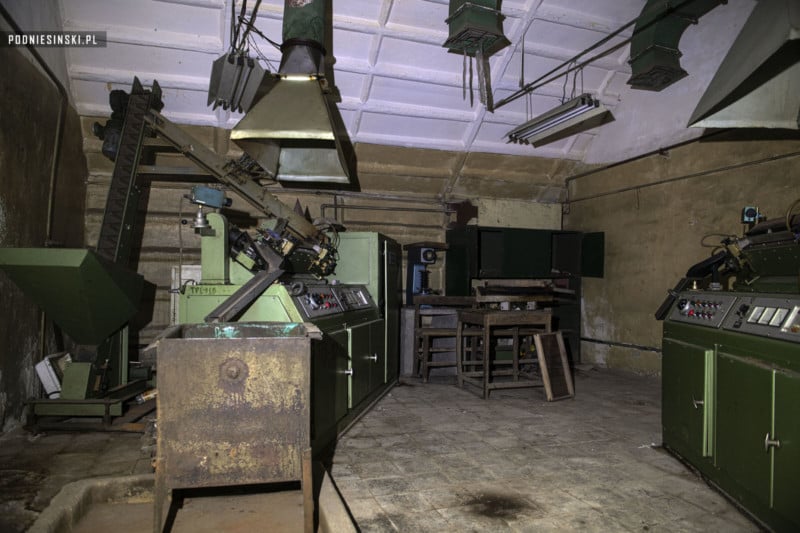 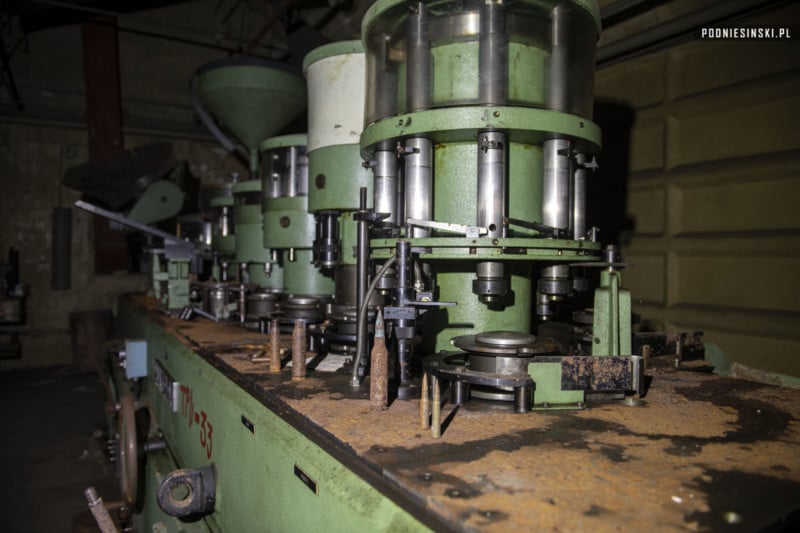 At the very end of the tunnel, I notice the sorting machines that positioned the bullets and transferred them to the machines that pressed them into prepared, powder-filled shells. This probably was the most dangerous part of the process, as an additional bunker-like room had been built next to the machines so that a worker could safely supervise production. And all of this was separated from the rest of the complex by concrete gates dozens of centimeters thick. 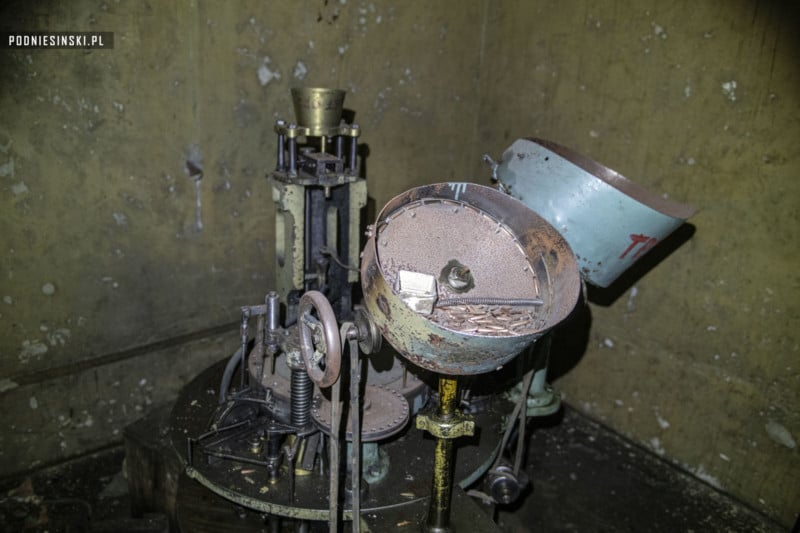 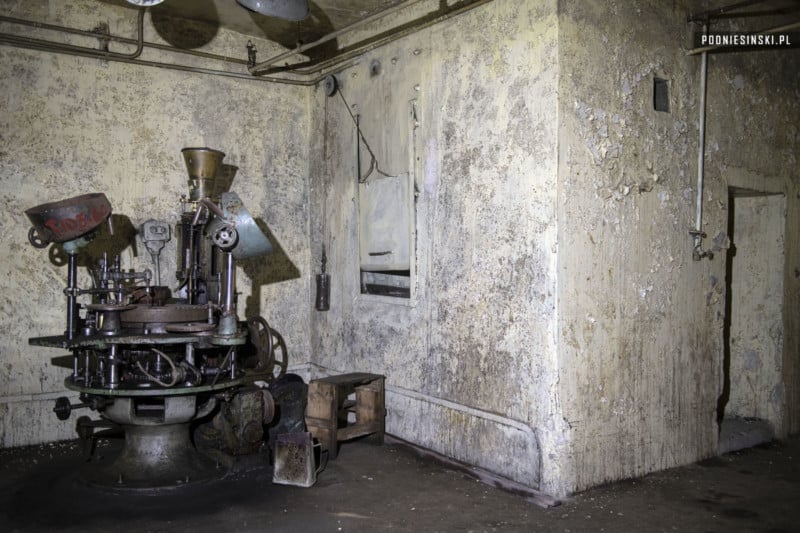 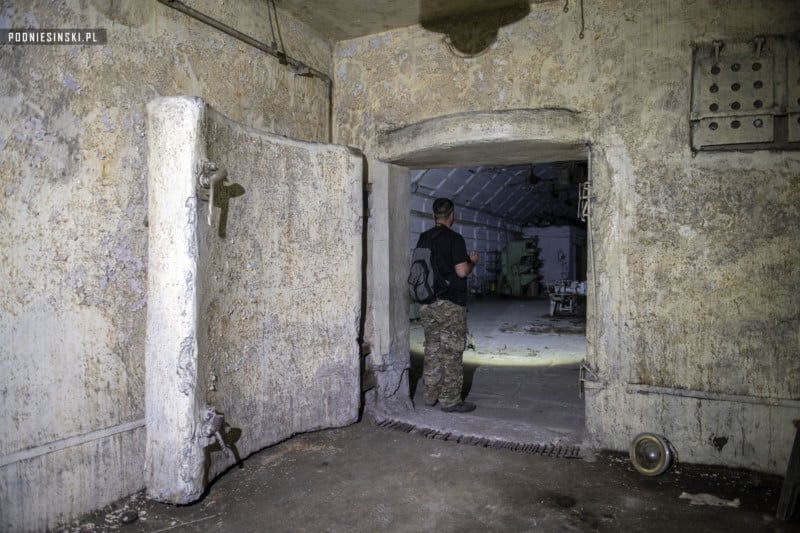 In the storage areas, we discover rusty barrels filled with a mysterious yellow substance. Illuminated by our flashlights, it sparkles like snow in the sunlight. Right next to it on the floor lay soggy paper sacks, through which dark gray material shines. Probably gunpowder or some other chemicals needed for its production.

On the packages I notice faded orange labels with the word EXPLOSIVE, warning of the dangerous contents. It’s best not to touch anything. In the next room, we find a dozen or so wooden crates neatly stacked by the wall. Several are open, revealing their contents – bullets. 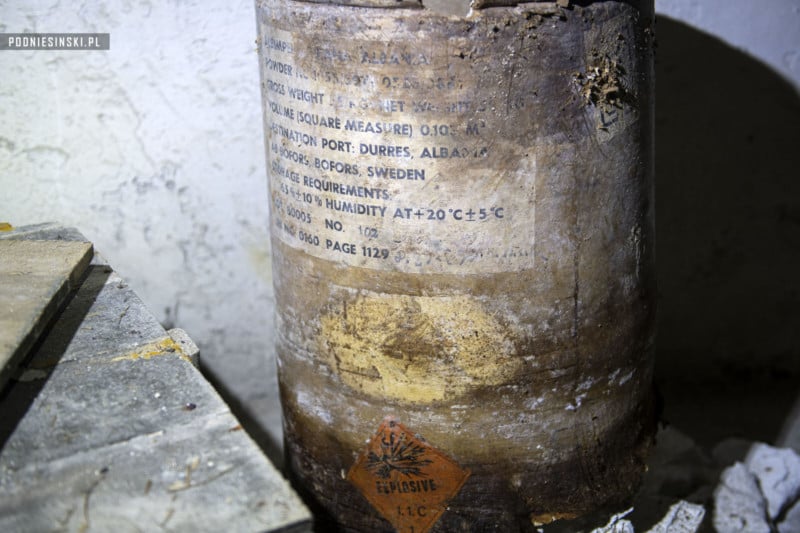 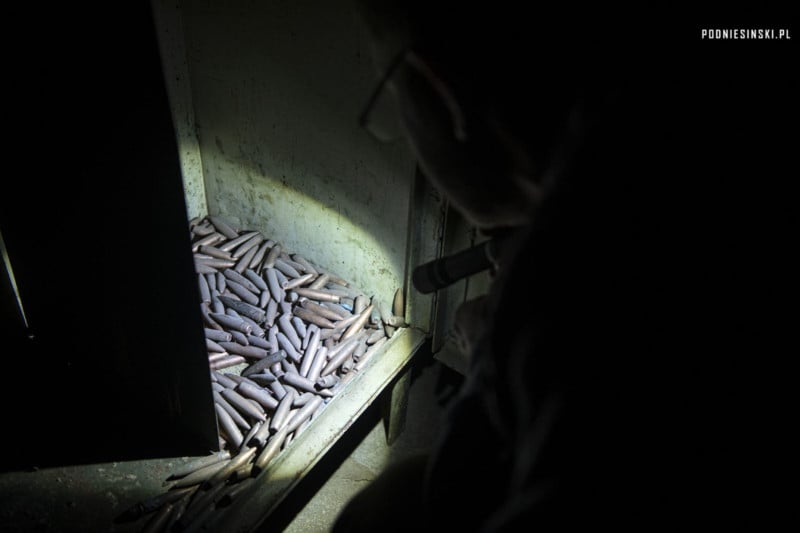 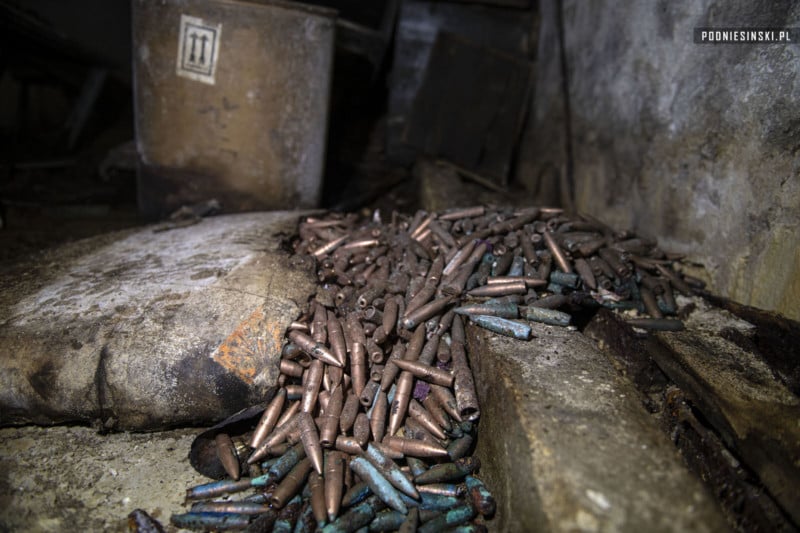 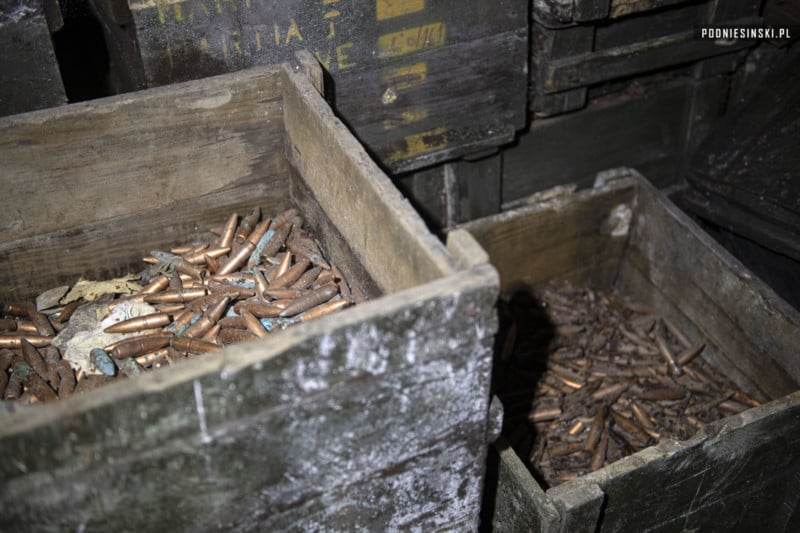 We’re so engrossed in exploring this amazing place that we don’t notice four hours have gone by. No wonder — after all, it’s not every day you get to see a hidden underground munitions factory.

On the way back we get disoriented. Dark thoughts arise: what will happen if we don’t find the exit and our flashlights run out of batteries? Phones are no help either because the concrete walls are half a meter thick and then there are a few dozen meters of solid rock effectively blocking contact with the outside world.

Luckily, a few distinctive objects we intentionally left behind while going deeper into the tunnels help us retrace our path. Thanks to them, we find our way out. We’re safe but left wanting more. We need to come back here again sometime.

About the author: Arkadiusz Podniesiński is a Polish photographer and filmmaker, a technical diver, and a graduate of Oxford Brookes University in Great Britain. The opinions expressed in this article are solely those of the author. You can find more of his work on his website. This photo essay was also published here.