Astro filmmaker Seán Doran has used a set of 78,846 repaired, rescaled, and remastered AIA Angstrom 171 photos from NASA’s Solar Dynamic Observatory to create a dramatic 48-minute timelapse video of the Sun as it moves over the course of a month.

The NASA Solar Dynamics Observatory (SDO) is a mission that the space agency has been using to observe the sun since it was launched on February 11, 2010. The observatory is part of the Living With a Star (LWS) program. According to NASA, the goal of the LWS program is to study the aspects of the Sun-Earth system that directly affect life and society on the planet. The SDO itself is used to understand the influence of the Sun on the Earth by studying the solar atmosphere in small scales of time and in many wavelengths simultaneously.

There are three instruments on the SDO that capture different wavelengths of light: Extreme Ultraviolet Variability Experiment (EVE), the Helioseismic and Magnetic Imager (HMI), and the Atmospheric Imaging Assembly (AIA). Below is a collage of solar images from the DO that shows how observations of the Sun in different wavelengths helps highlight different aspects of the Sun’s surface and atmosphere:

The third of these instruments, the AIA, has the full name of the AIA 171 Å (Angstrom), and it shows the quiet corona and coronal loops, typically colorized in gold. As explained by NASA:

The Sun emits light in all colors, but since yellow is the brightest wavelength from the Sun, that is the color we see with our naked eye. Specialized instruments can observe light far beyond the ranges visible to the naked eye. Different wavelengths convey information about different components of the Sun’s surface and atmosphere.

Below is the most recent photo (at the time of publication) captured by the AIA 171 Angstrom as an example: 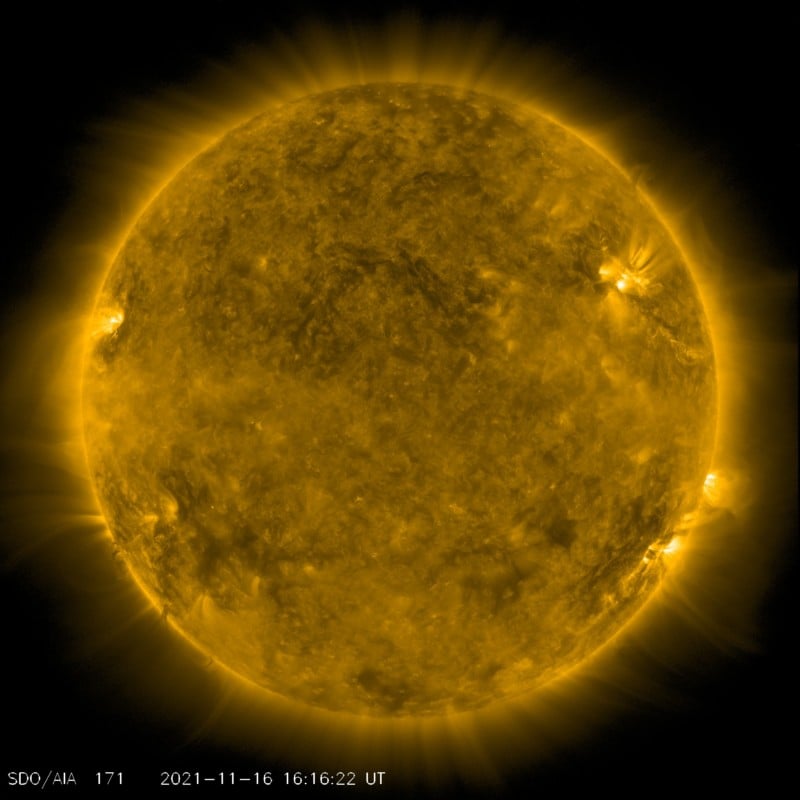 As spotted by Laughing Squid, Doran used 78,846 frames taken by this particular instrument on the SDO during the month of August in 2014. After repairing, processing, and rescaling them to fit his desired look, he created about 22 minutes of footage at 60 frames per second. After slowing that down to half that for more traditional viewing, the finished video is 44 minutes long and shows a slow pan over the Sun that would normally take 31 days to see.

For more like this, Doran has a large library of stunning astro-focused videos that use NASA imagery on his YouTube Channel.