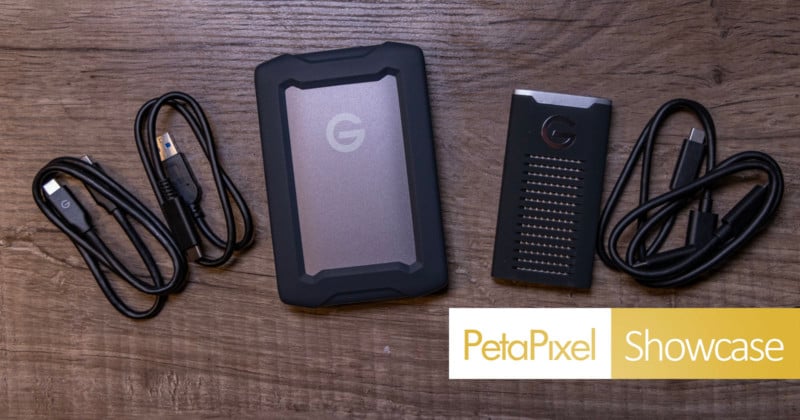 G-Technology has been a mainstay brand for photographers for years, but was recently rebranded under SanDisk Professional. While the products now have a new name, has anything else changed?

I have been a huge fan of G-Tech products since I got into the industry, and I still use a G-Tech RAID array every day. But recently, Western Digital decided that it was going to fold the G-Tech product line under SanDisk (it owns both brands in addition to its own WD brand) and while the products right now still share the iconic “G” logo, the G-Technologies name is nowhere to be found on the packaging. 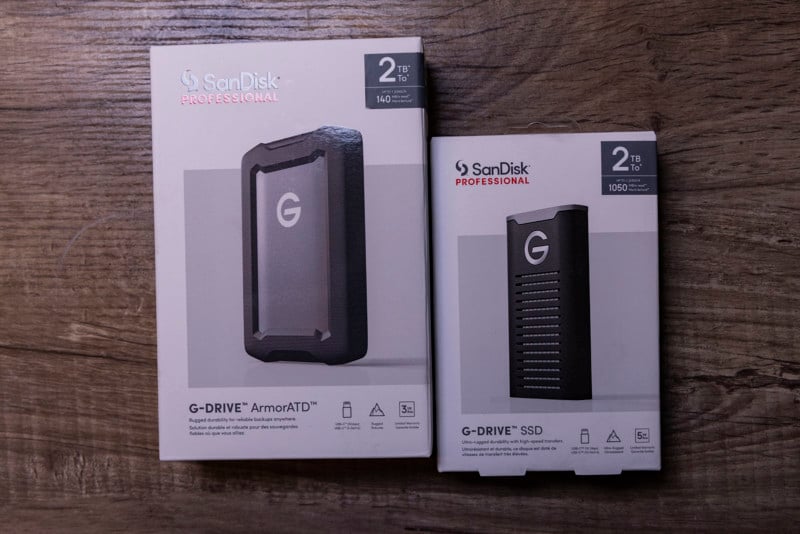 I actually think this is a pretty smart move, and puts the product line under the far more well-known SanDisk name. But rebrands sometimes don’t always mean good things when it comes to product performance, so we decided to see if anything other than the name changed. To that end, let’s take a look at the new SanDisk Professional G-Drive SSSD and G-Drive Armor ATD.

I’m happy to report that not only does the product seem to be as high-quality as it has always been, in the case of the G-Drive SSD, performance has actually improved. 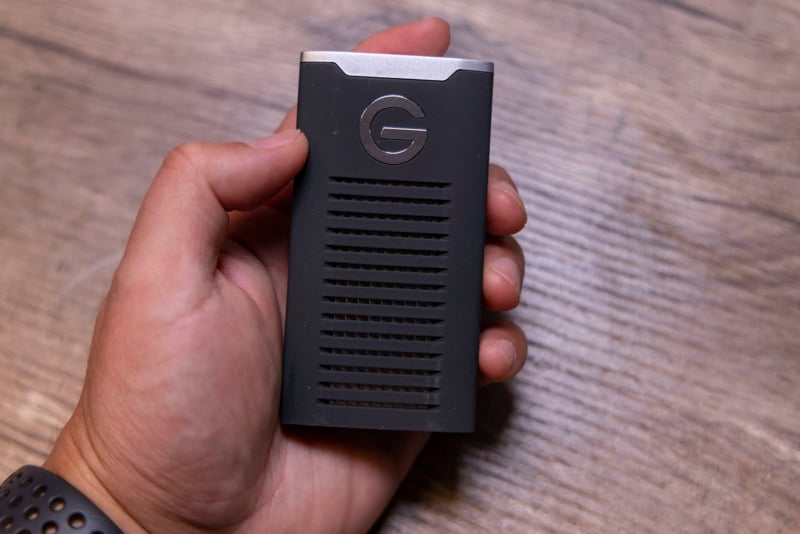 Let’s start with the G-Drive SSD. I actually reviewed the original iteration of this product several years ago and praised the speed and design of the miniature storage device. Side by side, very little has changed with the rebrand other than the subtle color under the grills on the front and back of the drive: what was once a shiny blue is now a more subtle silver. 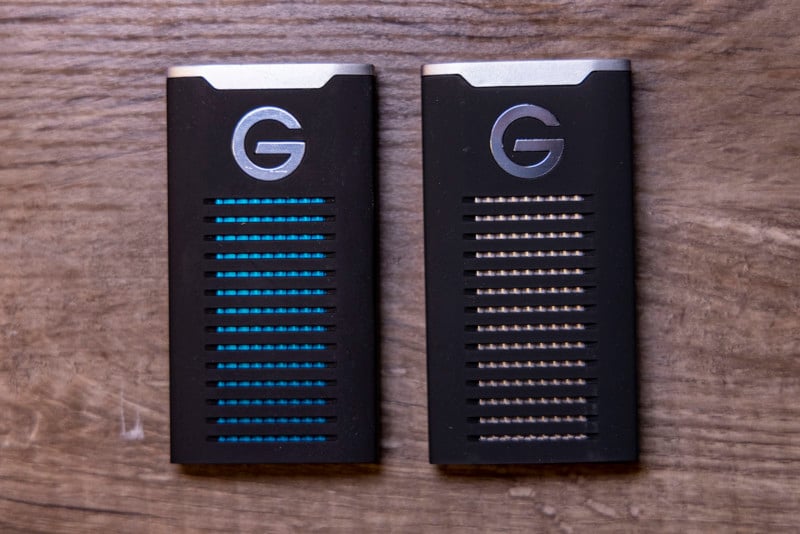 Honestly, I prefer the blue but it doesn’t appreciably take away from the look of this drive — it’s still a very attractive little SSD. Size and weight are pretty much identical as is the support for USB-C but not Thunderbolt. Back in 2018 when I first reviewed the original, I found the speeds to be totally in line with the cost and more than enough to appease even the most demanding photographers.

I rechecked those numbers in a speed test performed on my MacBook Pro, with the results below: 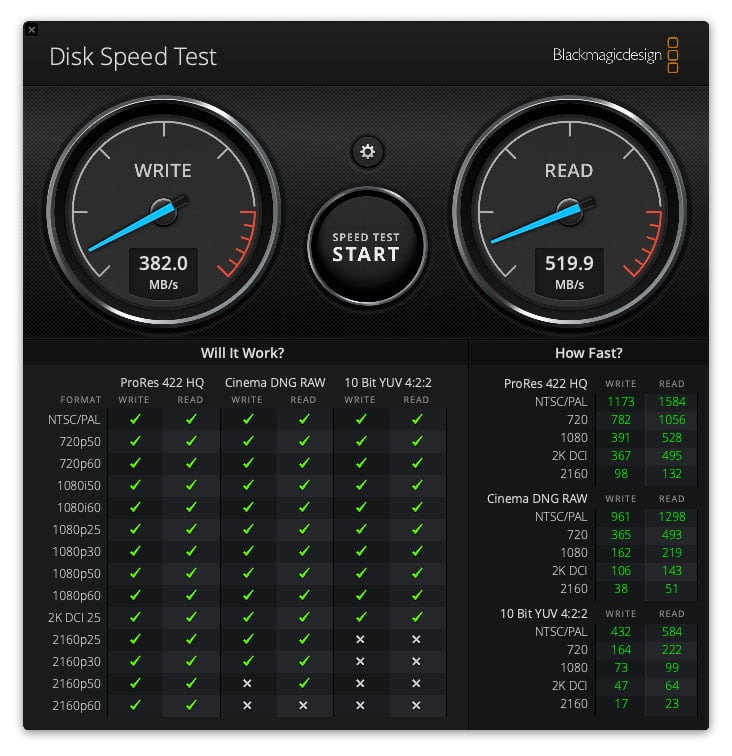 That’s still great, but the new version of this drive smokes those speeds: 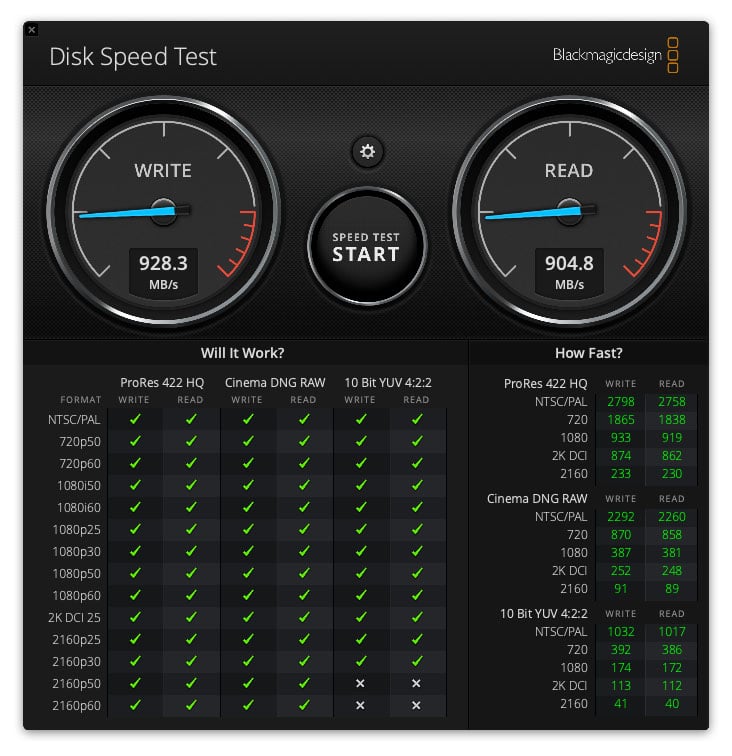 SanDisk’s new iteration of this drive more than doubles the write speed and nearly doubles the read speed. While I was unable to replicate the promised 1050 MB/s on the box, the 928 MB/s write speed and 903 MB/s read speeds is fast enough to support most video formats and will easily chew through even the highest resolution photos. You do not need to worry about working directly off this drive, that much is for sure. 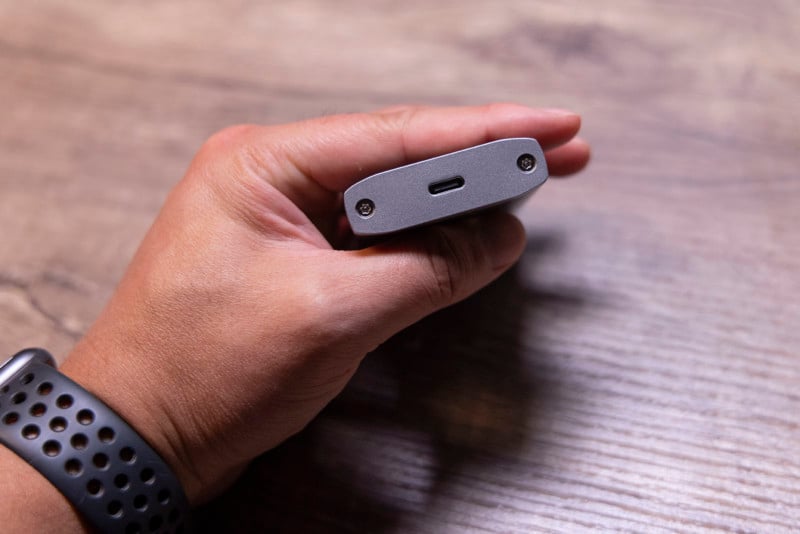 When I first reviewed the G-Drive Mobile SSD, the 500GB version cost $189. This new SanDisk-branded version costs $140 and has much better performance. From where I am standing, that’s a win. It is also available in 1TB and 2TB configurations for $230 and $360 respectively. 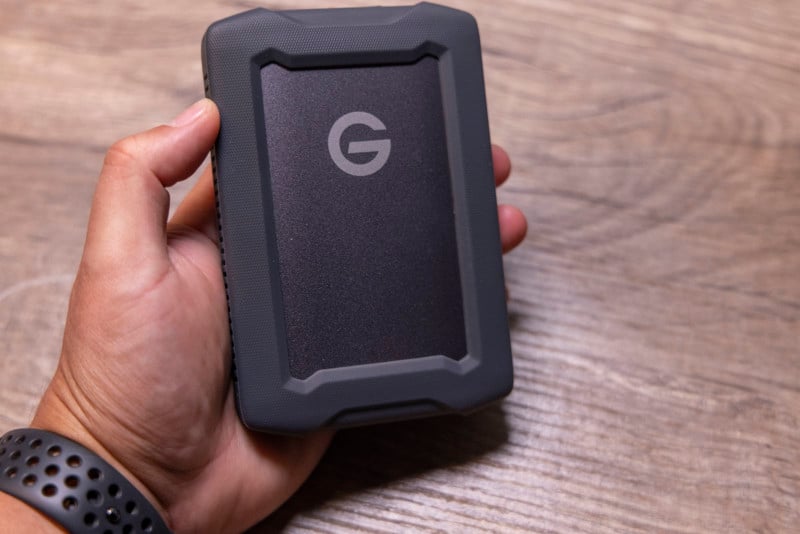 Not everyone needs super high speeds and some are willing to prioritize ruggedness and price over it. While marketing often shows drives like this braving the elements while a photographer edits in the snow or on the side of a mountain, realistically that’s not a real-world, practical application you’ll see very often.

When I ran my own production company, sometimes clients would request large amounts of video footage at original quality, which would be an absolute nightmare to send digitally. What is much faster is sending a storage drive through the mail. As you might expect though, that’s a big risk if the drive isn’t robust enough to handle the trip.

The Armor ATD only boasts up to 140 MB/s transfer speeds on the box, but for the purpose I just described, that’s plenty. That allows me to move about 50GB of photos and videos to it in around eight minutes, which is more than fast enough for sharing content with a client — no one is planning to edit off this thing.

Below are the read and write speeds according to our testing, which do not quite meet the promises on the box but are still fine for the intended use cases: 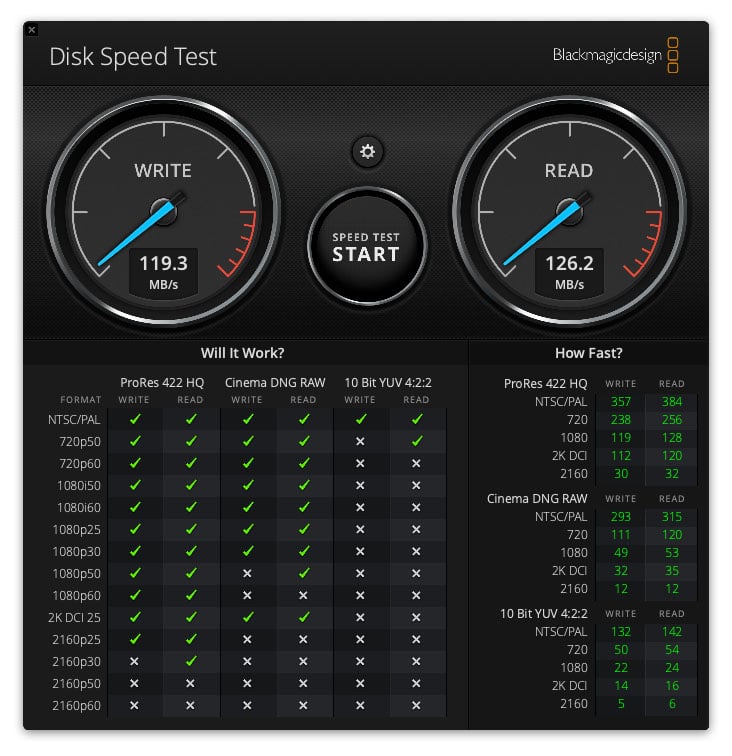 The drive is small and light for an HDD-based storage device and is crush-resistant up to 1,000 pounds, drop-resistant up to 1.2 meters (about 4 feet), and is IP53 rain and dust resistant thanks to a little rubber stopper that blocks the USB-C port at the top of the drive. 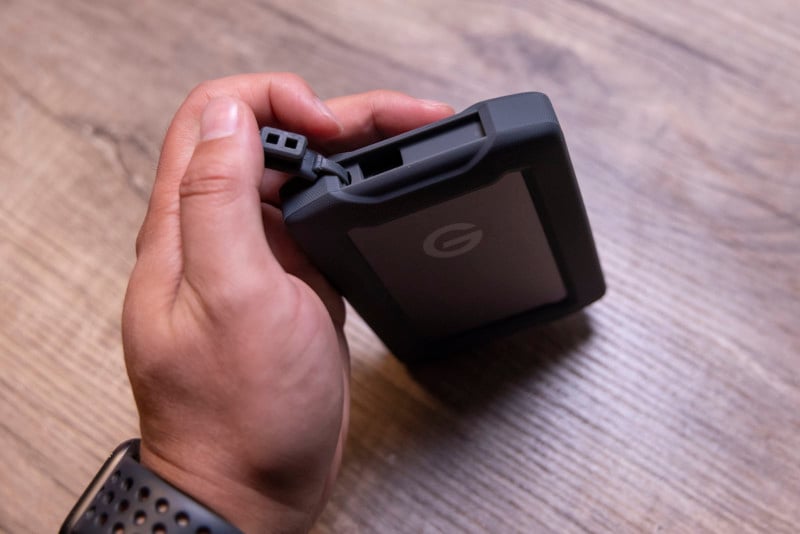 G-Tech’s Reputation is in Good Hands

One thing to note is that the cables that are included with the two drives aren’t consistent, which I thought was a bit strange. For example, both ship with USB-C cables of equal length, but one bears the “G” logo and the other does not. Additionally, one set of cables was wrapped in plastic and the other was wrapped in paper. This inconsistency I find strange since both are from the same company and were produced at what I would assume was around the same time. I’ll chalk this up to transition pains as neither of these actually result in discernable quality issues, but I did find it worth mentioning. 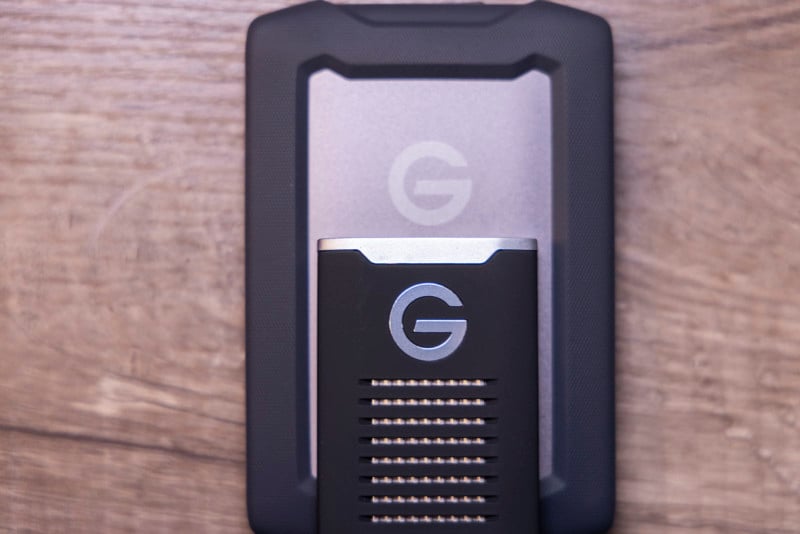 If you were worried or confused with the changes at G-Tech, at least the branding change hasn’t affected product performance. If anything, the products are better and cheaper than they were before, which I see as a win.