The Tour de France was thrown into chaos on Saturday after a careless fan posing for the camera with a cardboard sign caused the entire peloton to crash at the world’s most prestigious bicycle race.


During the first stage of the race, which spanned 122.9 miles (197.8km) from Brest to Landerneau in France, an unidentified woman wearing a yellow jacket was seen leaning into the road and smiling at cameras with her back to the oncoming cyclists while holding a sign that read “Allez Opi-Omi” (which translates from French and German to “Come on granddad-granny”). 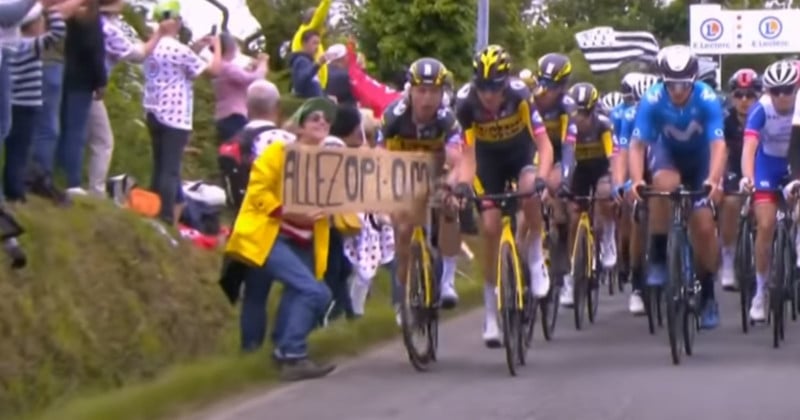 It’s unclear if the woman was purely posing for the television camera, or whether she was also being photographed by someone on the other side of the road.

As the peloton (the main group or pack of riders) arrived at the spot, German cyclist Tony Martin crashed into the woman’s sign, lost his balance, fell sideways into the ground, and caused a chain reaction of crashes that wiped out nearly the entire pack.

Most racers were able to free themselves from the tangled mess of bicycles and athletes and continue racing, while other elite cyclists and spectators had to be treated for injuries — one racer, German rider Jasha Sutterlin, had to immediately pull out of the grueling 21-stage race.

A fan caused a massive crash on Stage 1 of the Tour de France and it was so terrifying https://t.co/9UbfdHrudM pic.twitter.com/xFEueprWqa

One of France’s two national police forces, the National Gendarmerie, says it’s now looking for the woman, who left the scene before authorities arrived.

In a statement released on Facebook, law enforcement stated that they’re hunting for the person responsible for causing “unintentional injuries […] by manifestly deliberate violation of an obligation of safety or prudence.”

Once she’s identified and located, the woman will face serious legal trouble: Tour de France organizers state that they’re planning to sue her.

“We are suing this woman who behaved so badly,” Tour deputy director Pierre-Yves Thouault tells AFP. “We are doing this so that the tiny minority of people who do this don’t spoil the show for everyone.”

On a serious note though; great to see still many spectators are loving our sport and cheering for us, but please, stay on the side of the road, not on the road! pic.twitter.com/0sU4yKR3nk

It’s been going on 100+ years and people know the script and most aren’t posing for the cameras init – people crowd mountains more than this, no barriers, no problems https://t.co/BF4o7fAQZP

Whenever you have that thought about the really embarrassing thing you did ages ago, just remember that you're not the person who accidentally toppled several #TourDeFrance cyclists by posing with a sign. https://t.co/MVjWhkzY3J

“When we come to the tour route, it is to admire the champions, otherwise we have nothing to do with it,” he tells Eurosport. “You have to be careful and not let yourself be carried away by enthusiasm. And above all, those who deserve television are the runners. The spectators do not come to see each other, they have their mirror for that.”

The Tour de France also posted a PSA the following day warning fans not to “risk everything for a photo.”

But for the Tour to be a success, respect the safety of the riders!

Don't risk everything for a photo or to get on television! pic.twitter.com/v8mat4UOtH

“We’re glad to have the public on the side of the road on the #TDF2021,” the race writes. “But for the Tour to be a success, respect the safety of the riders! Don’t risk everything for a photo or to get on television!”