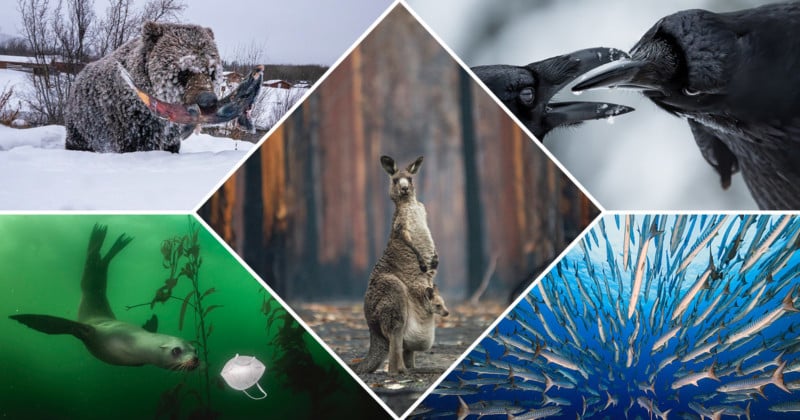 The BigPicture Natural World Photography Competition 2021, which celebrates and illustrates the rich diversity of life on Earth and promotes conservation through photography, has unveiled its winners and finalists across seven categories.

The BigPicture Natural World Photography Competition welcomes high-quality nature, wildlife, and conservation images from photographers all over the world. It is judged by a panel of nature and conservation photography experts including Suzy Eszterhas, Morgan Heim, and bioGraphic contributing photo editor Sophie Stafford.

The Grand Prize of $5,000 is awarded for the best overall image in the competition which will also be featured in the annual exhibit at the California Academy of Sciences, while first-place winners across seven categories will each receive $1,000 cash price and also have their winning photographs featured in the exhibit.

The judged categories are as follows: “Art of Nature,” “Aquatic Life,” “Winged Life,” “Landscapes, Waterscapes, and Flora,” “Terrestrial Wildlife,” “Human/Nature,” and “Photo Story: Out of the Ordinary,” which requires submissions to contain 4-6 images with captions.

Photographer Jo-Anne McArthur received the grand prize with her striking photograph of a female eastern grey kangaroo with a joey in her pouch. McArthur encountered the family of two shortly after the devastating bushfire near Australia’s southeast coast, which have burned over 17 million hectares (42 million acres) of the Australian landscape in 2019 and 2020 alone.

For the photographer, the captured image means more than just highlighting two of Australia’s most iconic species — the kangaroo and the eucalyptus tree in the background — as this moment also symbolizes hope and “that life can persist against all odds.”

The category “Art of Nature” showcases the best of abstract expressions of nature or science, with endless creative possibilities. Sarang Naik’s winning photo depicts a golden plume of spores that have risen from the gills of a mushroom cap outside of Toplepada, India.

A small number of these spores will land on soil, ready to produce new mushrooms, while many more will find their way into the atmosphere to provide a solid core for the condensation of water into clouds and rainfall, serving the forests around the world and sustaining future generations of fungi. However, as droughts worsen due to climate change, fewer mushrooms spring up, reducing spore-spurred rains and consequently leading to more intense droughts in the future.

Yung-Sen Wu captured the photo of streamlined barracuda after days of braving the currents of the Blue Corner — one of the best dive sites in the world, situated in the southern part of Palau — in an effort to gain their trust and be allowed into the school to capture this image.

Shane Kalyn from Vancouver, Canada took top honors in this category with his close-up of two ravens preening each other’s feathers. The photographer had observed the gift-sharing, grooming, and singing courtship behaviors of these birds for three winters but had never come across a moment like this before.

Fran Rubia captured a drone shot of iron oxide, deposited during past eruptions, flowing down the sides of volcanos in Fjallabak Nature Reserve in Iceland, where the last eruption took place in 1480.

“Because the image seems to be photographed in another world, on another planet, it seemed to me a primal place without any human alteration, which made it even more special,” says Rubia about his winning image.

Michelle Valberg’s photograph of a Kermode bear — a subspecies of the American black bear — was captured on a remote island in northern British Columbia. The Nikon ambassador and first Canadian Geographic Photographer-in-Residence crouched low to the ground and waited for the moment bear pulled his head out of the water and shook, sending droplets of water all around.

To Valberg, wildlife photography means “to look into the eyes of the wild and see ourselves reflected, to understand that we are, after all, intrinsically entwined.”

The COVID-19 pandemic consequences seeping into the wildlife were captured by Ralph Pace. Single-use plastic production skyrocketed throughout the last year which has caused a devastating effect on the environment — gloves and masks have piled up in landfills or found their way into the ocean.

The impactful photograph depicts a curious California sea lion encountering a floating face mask, and although the photographer saw a mask underwater for the first time, Pace says that unfortunately, it is very likely that the sea lion has seen many more since.

Photo Story: Out of the Ordinary

Peter Mather won this category for his photos of grizzly bears in Canada’s Yukon Territory. The bears are facing the impact caused by climate change and other human activities which have led to sparse salmon runs, reduced river flows, and shorter winters. All of these put their lives in jeopardy and make it difficult to survive. The full six-image series can be seen here.

The full gallery of winners and finalists can be found on The BigPicture competition website.

Image credits: All photos individually credited and provided courtesy of The BigPicture. These images originally appeared in bioGraphic, an online magazine about science and sustainability, and the official media sponsor for the California Academy of Sciences’ BigPicture Natural World Photography Competition.